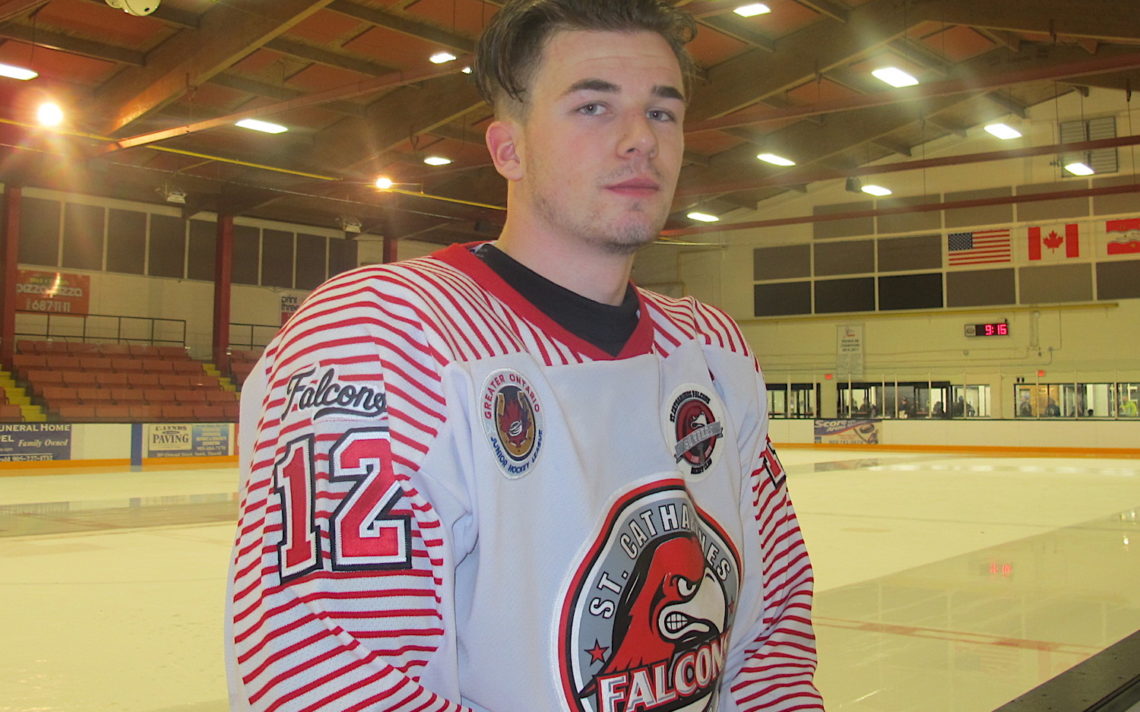 The first few weeks of Kyle West’s career with the St. Catharines Falcons certainly have not gone according to plan.

The 19-year-old Burlington native was one of several players acquired at the trade deadline, but the big winger suffered a hand injury and suspension almost immediately upon arrival.

When he did finally make his way into the lineup, West was understandably rusty and was held scoreless in his first three games.

West finally got on the scoresheet with his first goal and also added two assists in a 4-0 victory over the Thorold Blackhawks in a Greater Ontario Junior Hockey League, Golden Horseshoe Conference game Thursday night at Thorold Arena.

“That was nice to change things up and have a couple bounce my way,” said West, who played 45 games with the Guelph Storm in 2014/15.

West admitted he was getting frustrated.

“I went through a pretty unlucky spell,” he said. “I broke my hand on the bench and my first game back I was suspended in the second period. Things weren’t going my way, but I’m glad it turned around.”

West, who began the season with Brantford of the GOJHL, is enjoying playing in a winning atmosphere.

“It’s way better here,” he said. “I’m having a blast. It’s a whole different atmosphere. We’re all about winning and the team I was on before weren’t doing too well and it was frustrating.”

West was put on a line with former OHL players Mike Davies and Liam Dunda and the trio clicked immediately.

“They’re great hockey players. I love playing with them. They see the ice very well and they feed you when you’re open.”

“He can put it in the net more than once in a while; the kid can score,” Fitzgerald said. “He is a very good hockey player. Now that he’s starting to hum and get it going, he’s a guy who can really help drive our offence.”

Fitzgerald said the move to put West with Dunda and Davies was by design.

“That line could be one of the hardest to play against in the league,” he said. “Not only are they big boys, but they are very skilled and when they are going, very competitive and very hard to play against.”

St. Catharines led 1-0 after one on West’s goal, then added two more in the second.

The Blackhawks played it close to the vest, collecting only nine shots on goal in the first 40 minutes. Overall, Owen Savory had to turn back just 13 shots for his fifth shutout of the season.

“We had to stay alert because they were waiting for us to fall asleep, for us to make a mistake,” Fitzgerald said. “If we stay sharp and continue to do the little things well and bite your tongue when they ice it for the 10th time in 10 minutes, then that’s what you get.”

“We’re going to finish in fifth and we’re trying to work on some things and using these games almost as practice,” he said.

Hawk talk: Spencer Blackwell and Daniel Lowe did not dress for the Hawks . . . Tanner Brown, Tanner Main and Gianluca Fuoco were scratched for the Falcons . . .  A moment of silence was held for Marion Timmins, mother of former Thorold owner and coach Dan Timmins, who died last week . . . The Falcons were called for a bench minor in the first period following an intentional offside call.

BPSN Star of the Game: Falcons forward Kyle West with a goal and two assists.

For the Thorold Blackhawks: No scoring.

Up next: The Hawks have a week off before the Caledonia Corvairs visit next Thursday. The Falcons welcome Welland Friday.