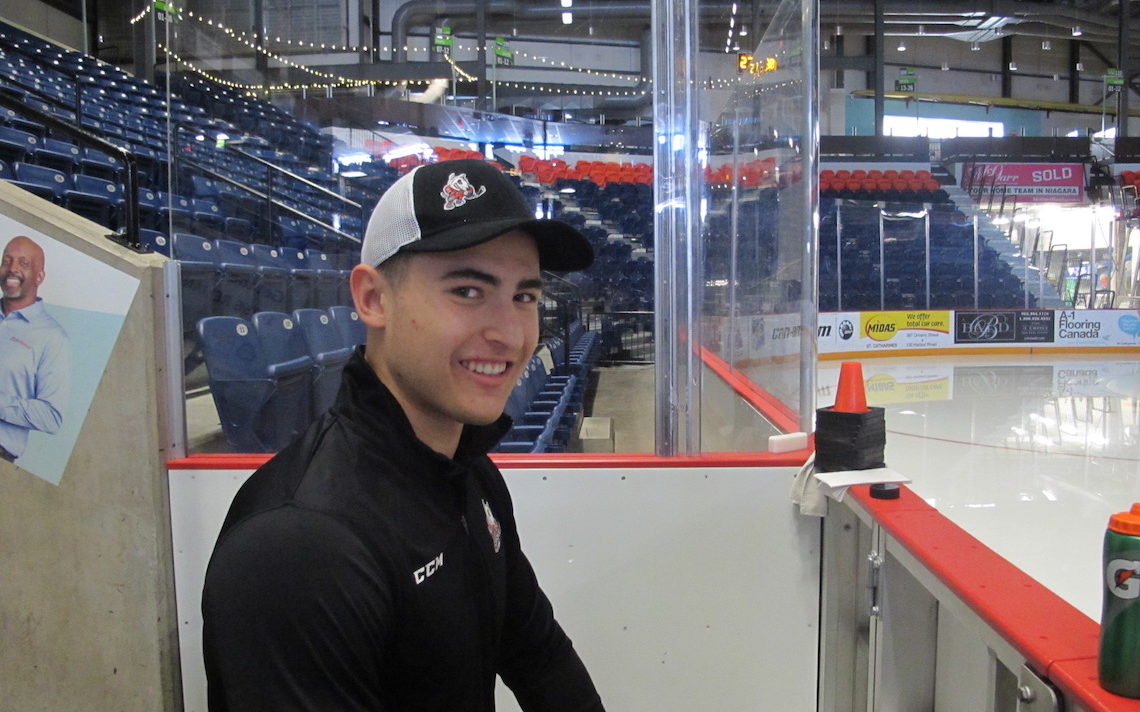 Colton Incze is a study in perseverance.

The 18-year-old netminder has encountered more than his share of roadblocks in his two seasons with the Niagara IceDogs.

Whether it’s been learning to live with a limited amount of playing time as understudy to Stephen Dhillon, or dealing with a variety of stubborn injuries, things haven’t quite gone as planned for the 18-year-old Oakville native.

“It can be frustrating sometimes just because the team is winning and it feels good to be part of a winning team, but you don’t feel like you have much of a purpose,” Incze said. “It can be a bit frustrating but it also motivates you in a lot of the practices or one of the tough workouts when you want to give up and don’t want to put in the extra work. Then when you do get in it feels really good and you can see that work paying off.”

Incze played in just 14 games last year and this season had a rough start in his first outing and has also dealt with a minor ankle problem.

“Sometimes you’re thinking, ‘Why me?’ It crosses your mind. It can really mess with your mind but it either breaks you or makes you,” Incze said.

Following an 8-4 loss in Peterborough in his season debut, Incze has made two quality relief appearances, including a solid effort last week in Erie which saw the IceDogs rally to earn a point.

Incze said coming in off the bench is all in how you look at it.

“I don’t mind it because your expectations for winning the game are so low there is no pressure,” he said. “You go in with the mindset of trying to have some fun and make the first few saves and usually if you make the first few the team kind of rallies around you. If you let the first couple in it kind of spirals out of control.”

With playing time tough to come by, good practice habits are vital.

“It’s really difficult but as a goaltender in general you have to be mentally strong,” IceDogs goalie coach Ryan Ludzik said. “It’s tough not having rhythms and starts and then when you do start, it doesn’t go as you planned.”

Ludzik said work ethic is not an issue with Incze.

“He’s a hard working guy but it’s about working smart and controlling and executing in practice,” Ludzik added. “We can do drills all we want but it’s on him because I’m not in his ear in the game. We take our time into goalie sessions and he has to be able to translate that to practice as he’s done that. We he does that, he’s on his game.”

Incze has developed a unique way to challenge himself at practice. He keeps notes on his phone and grades himself in various categories following each practice.

Incze, a fifth-round selection of Niagara in 2015, reminds himself to look at the big picture when it comes to practice.

“Sometimes it’s hard to get excited for a practice,” he said. “The way I think of it there are 20 teams in the OHL and three leagues across Canada so that’s a minimum of 60 goalies across Canada. If I have an average practice that’s not going to be good enough to make it to the next level. I have to go out and practice like every shot is the most important shot.”

“We’ve never had an issue with Colton. He pushes Stevie and the competition is good. Every athlete wants to play and be the guy. He’s going about it the right way. He’s focused and helping our players in practice. He doesn’t just mail it in. He makes it competitive and that’s important.”

The IceDogs would like to lessen Dhillon’s workload this season to keep him fresh for what they hope is a long playoff run.

“You don’t win games with bad goaltending,” Ludzik said. “It helps having two assets you can play if one is injured or not having a good game. We’re confident in both our guys which is a huge asset.”

Ice cubes: Rookie forward Philip Tomasino has been named to Hockey Canada’s U17 roster in preparation for the World U17 Hockey Challenge from Nov. 5-11 in Dawson’s Creek and Fort St. John, British Columbia. Tomasino attended Canada’s U17 Camp over the summer, held in Calgary. The rookie winger has four points in nine games this season.