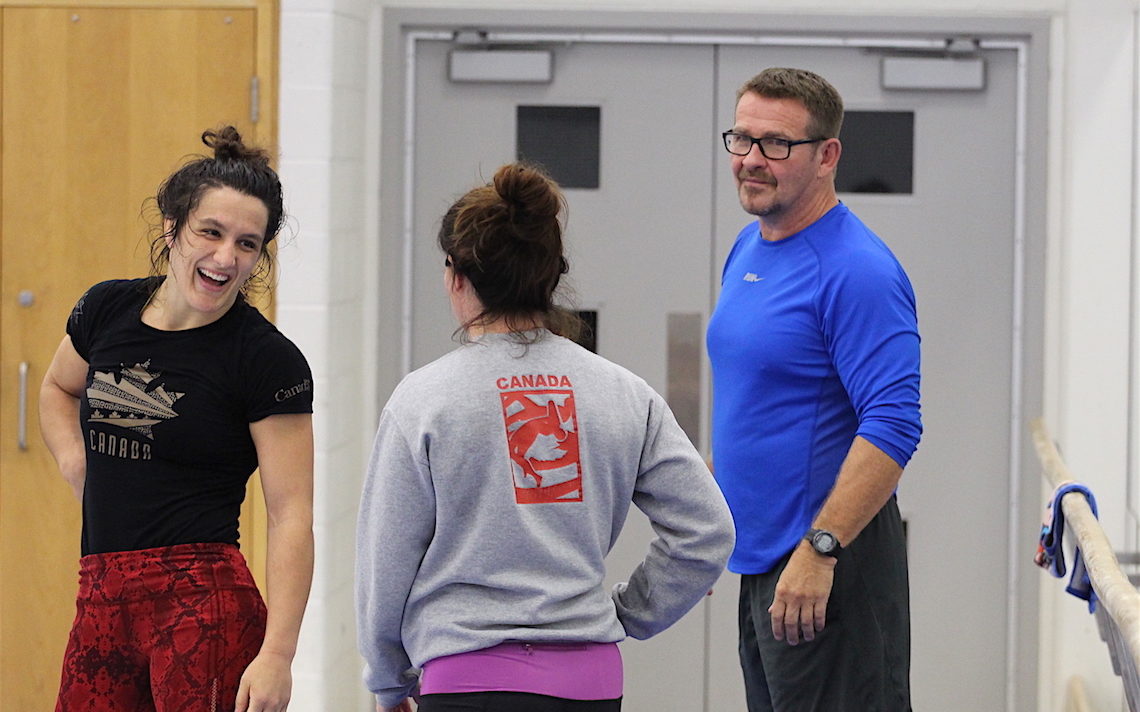 More than 30 years ago, Dave Collie went to Beamsville and District Secondary School to apply for a teaching position.

“I told Peter Crich, the principal, that I would have an OFSAA (Ontario Federation of School Athletic Associations) championship in five or 10 years,” the Toronto native said.“I guess I was a little cocky, but we did do it.

“Afterwards it was ‘Whew.’ You don’t know what the clientele will be like and Beamsville’s enrolment was going down and down every year that I was there.”

“I kept track of it just for the kids so that they could see what the history was, but for me it was in the past,” he said. “It’s like what we do up here at Brock right now, Yes we have won so many USports championships but that was last year. What are we working towards this year? We had five people at the senior worlds last year, but that was last year. We are always looking ahead.” Collie and his Beamsville athletes achieved success through hard work.

“My whole career there we practised five days a week,” he said. “I did that for 30 years and I got the commitment from the kids.”

Training started the last week of October. Once the high school season ended in March, Collie would continue on with those kids preparing for national championships.

“Right from the get go, I knew she was special,” Collie said. “She was athletic, she was smart, she was a hard worker and she had a knack for it.”

Verbeek has been coached by Collie, competed with him at the same national championships and now is coaching with him.

“He has done so much for wrestling in general in the Niagara region, across Ontario and into the national level as well,” said Verbeek, a national team coach based out of Brock. “For me, introducing girls wrestling into high school was huge.”

In Verbeek’s eyes, Collie always tried to make a difference.

“It was doing the little things for his athletes, just taking care of us and looking out for our best interests.”

Collie used to drive Verbeek up to Brock to train when she was a teenager and made sure she knew there was more to wrestling when high school ended.

“One thing I really valued about his coaching philosophy is that he wasn’t just looking for results at the high school level. He was looking to build a foundation for athletes and as people to continue on after high school.”

“He has bit of different perspective than Marty and the balance is really strong,” Verbeek said. “He believes in the process, he believes in the training philosophy here and he’s the whole package.

“He’s a team player and that’s the bottom line.”

Collie has been helping with the Brock university and club wrestling program since he graduated from the St. Catharines university in 1986.

“The last four years I have been spending a lot of time here, coaching full time as well, but now there’s a big difference from last year,” he said.

While still teaching, Collie would be a Brock five mornings a week, but now he is at Brock twice a day when the team has two workouts scheduled and plans to do a lot more travelling with the team.

He admits it was odd when September rolled around and he wasn’t heading back to work. He has fond memories of Beamsville.

“There’s lot of memorable individuals but also lots of memorable matches,” he said. “I had one individual who was not very athletic or academic and one year he knocked off a really strong wrestler from South Lincoln to go to OFSAA. He then went to OFSAA and won a couple of matches.”

That snippet is emblematic of the many Collie has stored in his memory.

Also among his highlights were watching daughter Keagin win two OFSAA wrestling golds and seeing his son Koldin compete at OFSAA despite being so sick he could barely get out of bed.

He will miss the element of high school wrestling where athletes start from scratch, but has always enjoyed his time in the Brock wrestling room.

“What nice in university, especially at this stage of my career, is that everyone at Brock is a highly motivated athlete and they have goals,” he said. “You are working on fine tuning rather than from scratch.”

Collie got his start in the sport when a high school wrestling coach held a coaching clinic at his elementary school.

“Wrestling challenged me more than any other sports I did,” he said. “The other sports were games and wrestling is a way of life.

Collie came to Niagara for an education and to train with Richard DesChatelets.

“He was wrestling the same weight class as I wanted to wrestle in and that’s why I came here,” said Collie, who would go on to represent Canada internationally.

During his teaching career at Beamsville, Collie spent 15 years as the school’s head of physical education and taught phys-ed, law and science.

He was heavily involved on the executive of the Niagara Region High School Athletic Association, including seven or eight years as a member of the executive.

Much has evolved in high school sports since he first became involved in it.

“Change comes really slow but I have seen participation numbers of kids trying out for teams dropping,” he said. “There’s less and less kids to draw from but there’s more and more kids working after school. Their priorities are more on making money and keeping their marks up in school.”

Collie has no plans to stop coaching at Brock. Once his wife, Sherry Crossman, retires from teaching he plans to travel more but for now most of his road trips involve catching home games and some road games of his daughter’s soccer team. Keagin is scholarship soccer player at Dayton University.

His former Beamsville athletes will not be far from his thoughts.

“I will miss the daily work with them but I will still see some of them up here at Brock.”