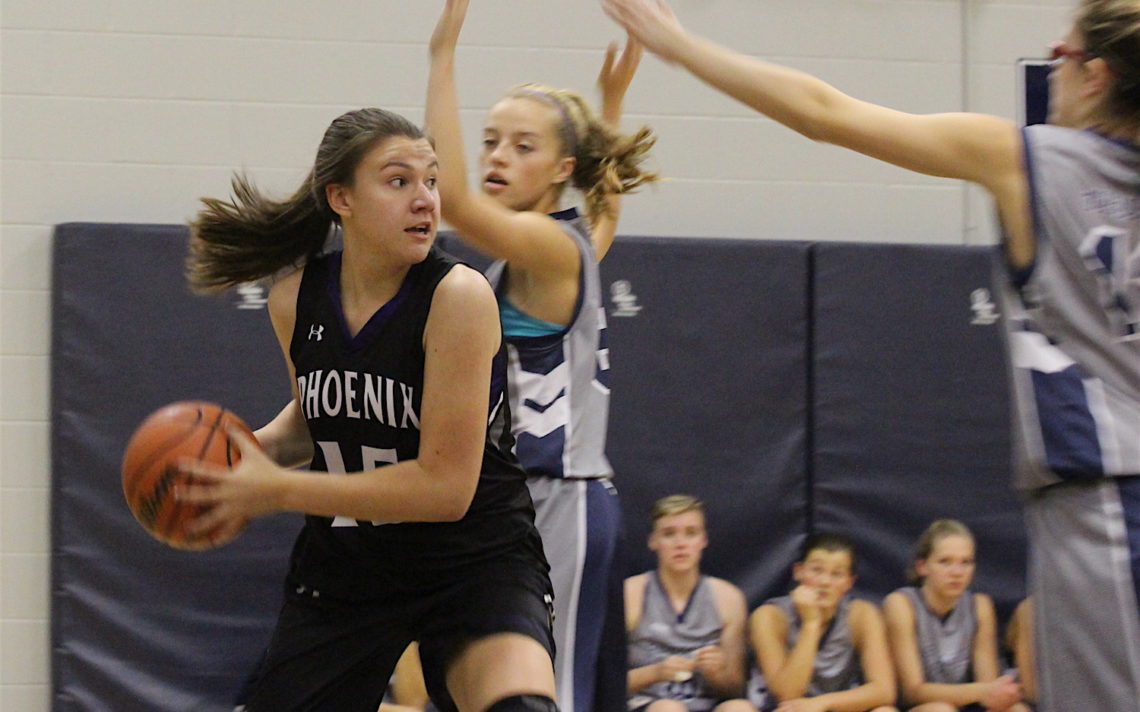 Sophia Al-Kayed is the engine that drives the offence of the St. Francis Phoenix senior girls basketball team.

The Grade 12 student is a rare pass-first point guard.

“That’s tough to find, that unselfishness in a high school player,” Phoenix coach Jon Marcheterre said, prior to a game Wednesday at Blessed Trinity. “Typically, they are trying to keep the spotlight on them but she’s pretty modest and doesn’t necessarily like the attention. But she definitely deserves it.

“She’s a heckuva player and really the catalyst for us.”

The 17-year-old is more than content to dish the ball.

“Since I have such good teammates, I’m fine with passing the ball because I trust them,” she said.  “If I drive inside, I know I can pass to someone outside.” Unselfishness is one of Al-Kayed’s many attributes,

“She is a real hard worker and she’s as tough as nails, too,” Marcheterre said. “Her coming out of the Standard tournament (with an injury) certainly changed the tournament for us, but you know right away if she says she’s hurt, she’s not playing because it’s unbearable.”

Al-Kayed admitted it wasn’t fun to be a spectator in the Standard tourney.

“It was horrible,” she said. “I do sit in games but not that much. The whole game I was wishing I could help them.”

Thankfully, the ankle injury that knocked her out of the tournament healed in seven days.

The Phoenix missed her on-court play and her leadership.

“She’s not an overly vocal leader but she leads by example and leaves it all out on the floor,” Marcheterre said. “She’s very quick, fearless and an exciting player.”

In his second year as head coach, Marcheterre has seen development in the 5-foot-6 guard.

“She is trying to be a little more patient and even though she always looks to distribute, she plays the game 100 miles an hour,” he said. “She needs to slow down her thinking a little bit to allow other things to develop around her.”

He would also like her to be a little more selfish with the ball.

“She is very strong with the ball in her hands and typically she is the quickest girl on the floor,” Marcheterre said. “She could be more aggressive and thus open up the floor a little bit more for her teammates,”

Al-Kayed is not playing travel basketball this winter after helping the Niagara Selects under-17 team win an Ontario Basketball Association Division 1 title this past spring.

“This year I stopped because it was getting too hectic with soccer,” she said. “Soccer starts in January and basketball is still going. And there’s school.”

Al-Kayed suited up last summer for the Niagara Regional Soccer Program but will play for the St. Caharines Jets under-21 team this season.

“I wouldn’t mind continuing to play basketball but I love soccer more,” she said.

Soccer was her first passion and she only got into basketball when her friend Erin Giroux’s father (former St. Catharines Rebels travel coach John Giroux) saw her playing soccer and suggested she give hoops a try.

“I wasn’t even expecting to play basketball,” she said.

Training for soccer helps her in basketball more than vice versa.

“Soccer helps me with the conditioning for running back and forth,” she said. “Sometimes I get tired but not very often.”

Both St. Francis and Blessed Trinity came into Wednesday’s game with 3-1 records and the Thunder took sole possession of second place behind unbeaten Notre Dame with a 59-55 victory. The Thunder struggled with defensive rebounding and the Phoenix missed too many easy shots.

“They were a good team though,” Al-Kayed said. “They kept making their shots and we had so many chances that kept bouncing out.”

“Other than the first quarter, we competed with them, fixing little things along the way like boxing out and making sure we didn’t get beat back on D,” Holy Cross coach Erin Gauthier said. “We most definitely missed Sarah O’Rourke as she is out with a sprained ankle.”