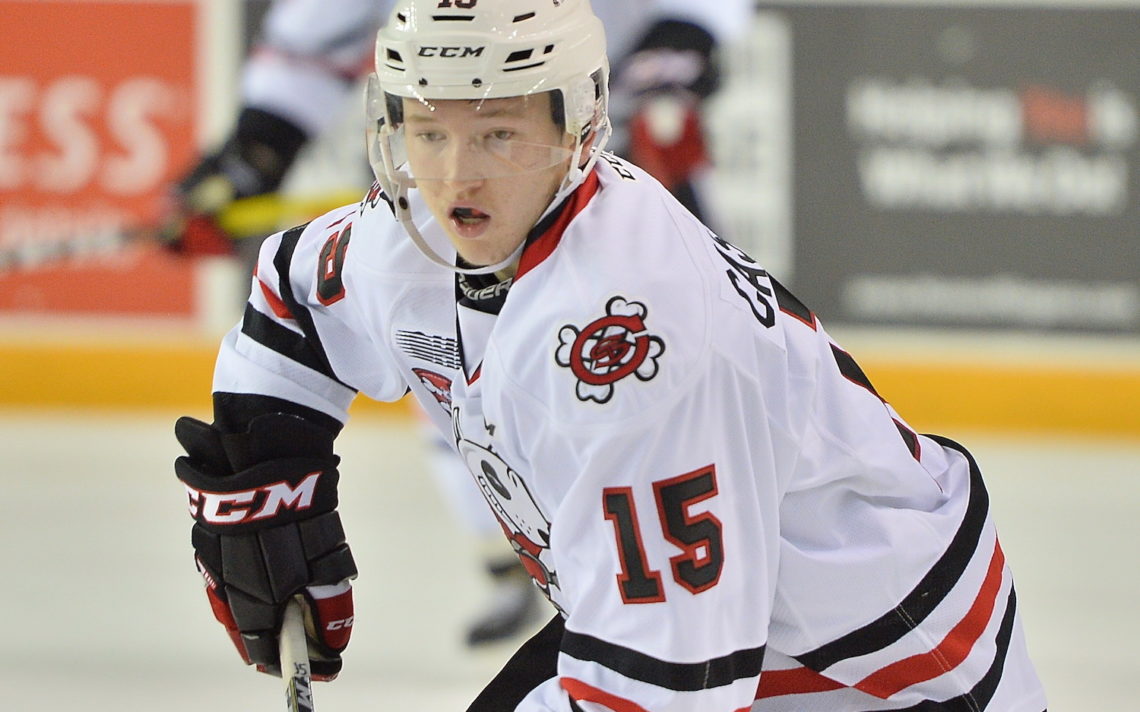 Oliver Castleman is playing some of his best hockey of the season at the most crucial time.

The 18-year-old Gloucester native had a mediocre regular season which included a 21-game scoreless streak, but has upped his game down the stretch and into the playoffs.

The IceDogs now advance to the semifinals where they will take on either the Hamilton Bulldogs, North Bay Battalion or Kingston Frontenacs.

Castleman, who also collected three assists in Game 4, was one of several lesser lights to shine as the IceDogs led from start to finish.

Liam Ham and Willy Lochead each collected a goal and assist while Bradey Johnson was held off the scoresheet, but turned in a solid, two-way game.

“It feels great. I’m working hard and everything is going my way,” said Castleman, who collected 12 goals in his sophomore season after netting 18 as a rookie. “The puck is going in and it feels great doing all of the little things.

“Good things are happening so I couldn’t be happier.”

The post-season has obviously brought out the best in Castleman.

“The playoffs are a completely different season,” he said. “You just want to be better than everyone else. It’s working hard on the boards and winning puck races, and it’s also some skill here and there.”

IceDogs coach Billy Burke certainly has noticed Castleman, promoting him to the third line when Kyle Langdon was suspended.

“Cass has had a great couple of weeks for us and I think he’s going to keep it going,” Burke said.

Burke was thrilled to eliminate the Generals and have some down time to rest and prepare for the next round.

“It went exactly how we hoped it would. You win Games 1 and 2 at home, split on the road, and win in five,” he said. “That was the plan going into this thing and when today rolled around, we did not want to go back to Oshawa.

There was no scoring in the first period, a surprisingly hum-drum 20 minutes, save for a couple of good chances for both teams later in the period. The Gens held a 10-9 edge in shots.

The IceDogs broke the scoreless deadlock early in the second wth a pair of quick goals by defencemen Lochead and Ham. Kyle MacLean got the Generals on the board with just under five minuets to play before Castleman answered back to give the IceDogs a 3-1 lead after two.

The Gens made things interesting with a goal five minutes in to narrow the gap to 3-2 before the IceDogs answered with a pair of quick goals to extend their lead to three goals.

“I thought it (effort) was great,” Burke said. “We told the guys at the end of the second period that we’re on the verge of ending some guy’s careers and we have to understand how serious that is.

“They didn’t roll over and I was impressed how we were able to weather their storm, not collapse from their pressure, and once again the fans brought us home.”

The IceDogs will take Sunday off and reconvene Monday to prepare for the next round.

Up next: Niagara advances to the Eastern Conference semifinals versus either Hamilton, North Bay or Kingston.