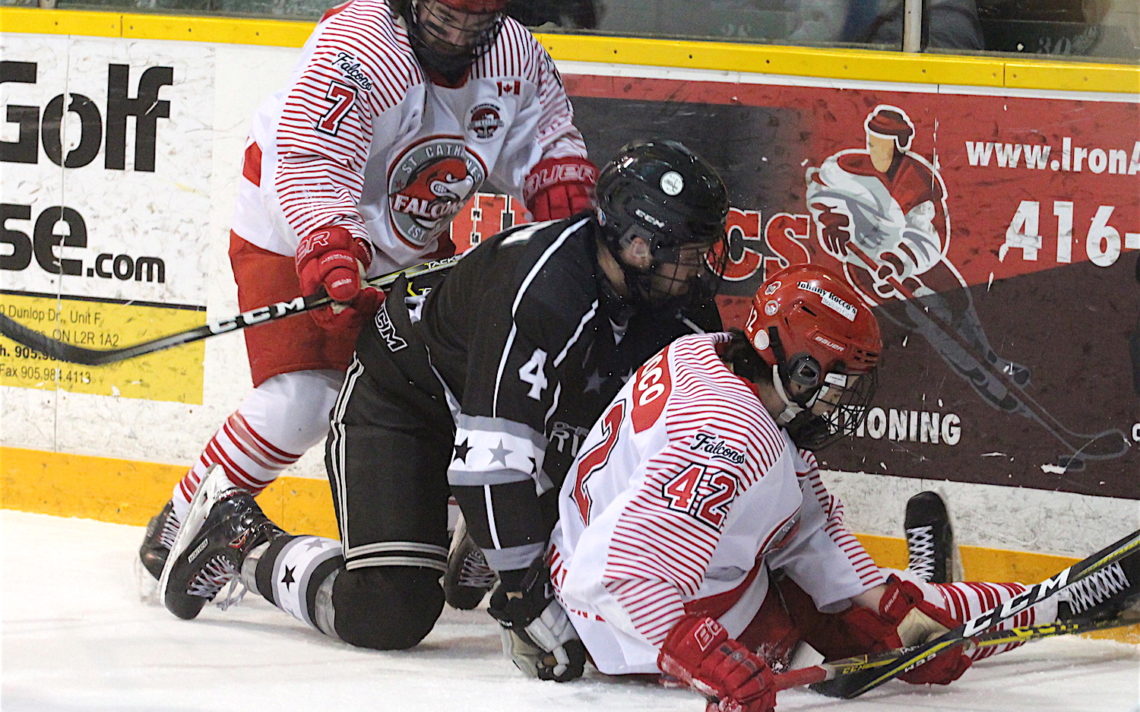 Falcons on the brink of elimination

The St. Catharines Falcons and Caledonia Corvairs meet Monday at Jack Gatecliff in Game 4 of the Golden Horseshoe final. The Corvairs lead the best-of-seven series 3-0. Photo by: Bernie Puchalski.

The St. Catharines Falcons have backed themselves into a corner from which there may be no escape.

The Corvairs can wrap up their sixth straight Golden Horseshoe crown with a win in Game 4 Monday at Jack Gatecliff Arena. Game 5, if necessary, would be Wednesday in Caledonia.

“We just have to prepare ourselves to play the best game we can Monday,” Falcons general manager/coach Frank Girhiny said. “We need to take one Monday and I feel confident we can do that.”

Girhiny was encouraged by Saturday night’s effort which saw the teams play a scoreless first period. Caledonia took a 1-0 lead in the second on goal by Adam Craievich before Joshua DeFarias netted two late goals in the third to put the game out of reach for St. Catharines.

“We were chance for chance with them. We were one shot away from tying the game,” Girhiny said. “We were pressing and then we took an undisciplined penalty. They scored on the power play and it’s game over.”

The Falcons were once again at a disadvantage with several key players out of the lineup. Dakota Miskolczi and Liam Dunda were suspended while Carson Edwardson and Tristian deJong were out with injuries. The club has also been battling a flu bug which caused Zach Lawerence to miss two games.

“I’m so happy with the guys who have come in and played,” Girhiny said. “We’re giving it, but we’re not deep enough.”

Dunda is slated to return from suspension Monday while Edwardson and DeJong are questionable.

The Falcons have been blanked twice in the series and managed to score just two goals.

“We’re not scoring, but because we’re so depleted, my top guys are penalty killing and playing against their top players and on the power play,” Girhiny said. “(Matt) Busby and (Tyler) MacArthur are getting 30 minutes of ice and you can’t do that. They have been unreal.”