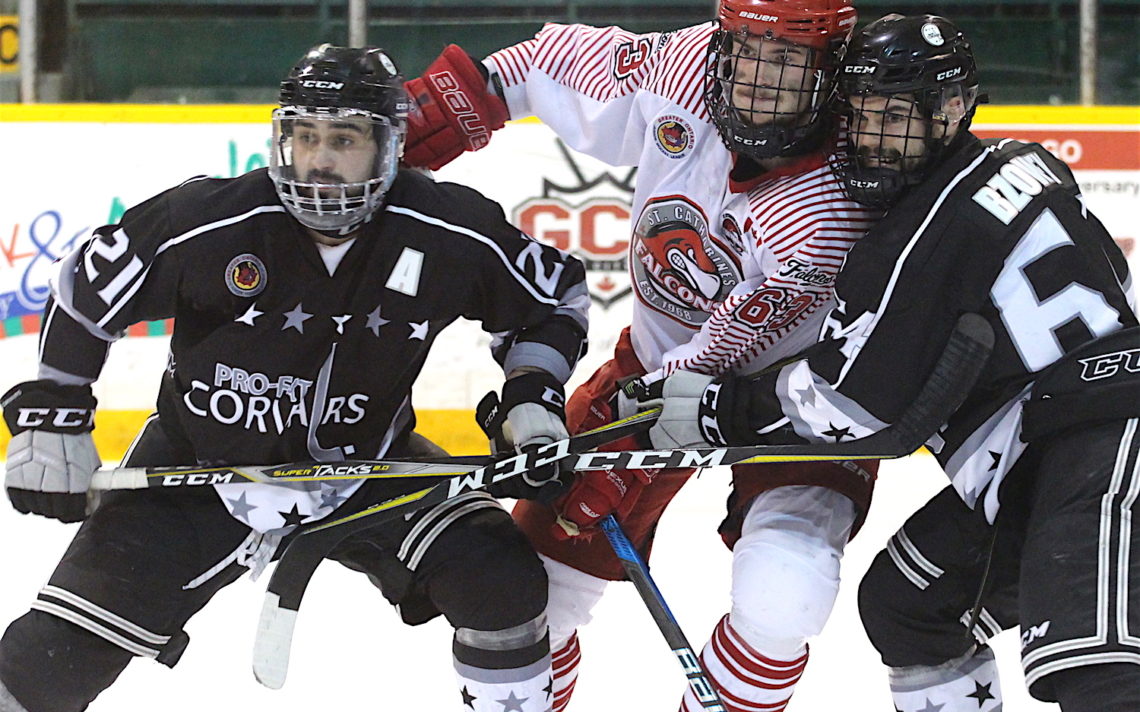 The St. Catharines Falcons were once again the author of their own demise.

The Falcons blew a two-goal lead and in the process dug themselves a huge hole after dropping a 4-2 decision to the Caledonia Corvairs Friday night at Jack Gatecliff Arena. 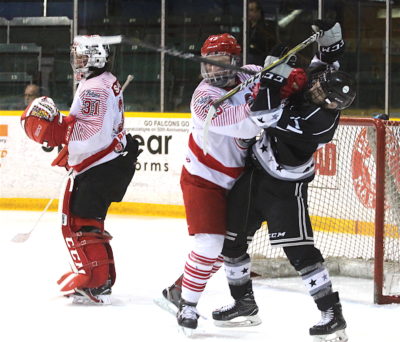 The regular season champion Corvairs now lead the Greater Ontario Junior Hockey League, Golden Horseshoe Conference best-of-seven championship final series 2-0 and can take a stranglehold on the set with a win at home in Game 3 Saturday.

The Falcons gave the Corvairs 11 chances on the power play and although Caledonia scored just once with the man advantage, that lack of discipline once again came back to bite St. Catharines big time.

Overall, the Falcons were assessed 47 minutes in penalties on 15 infractions while the Corvairs spent just 15 minutes in the box on seven infractions.

“I’m so tired of it . . . I’m speechless,” Falcons general manager/coach Frank Girhiny said. “I cannot believe we played such a good game and there’s penalties in the course of a game, but it’s the type of penalties we are taking.

“It’s been a huge issue all year and against that team you cannot do that.”

Almost lost in the aftermath was a great start by St. Catharines that had them up 2-0 before the halfway point of the first on goals Kyle West and Andrew Somerville. The Falcons then ran into penalty issues and permitted a late goal by Eric Eschweiler to lead 2-1 after 20 minutes. 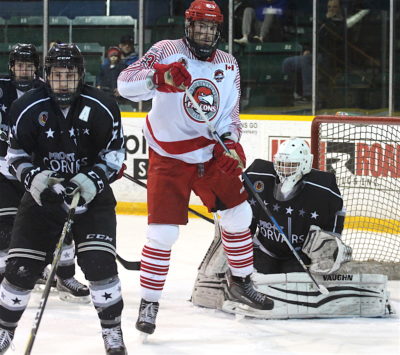 The Corvairs netted the lone goal of the second on a power play in wild, ragged period filled with penalties and turnovers.

Caledonia then scored two goals before the four-minute mark of the third. The Falcons still had plenty of time to get back into the game, but were unable to respond.

Girhiny still has faith in his club — the Falcons were the only team to defeat the Corvairs in regulation and did it four times in the regular season.

“All we need to do is steal one and come back here Monday and win and we’re right there,” he said. “We’re in the series. I feel good. I don’t feel we are out of the series, but our boys need to play the game the right way and they’re not. 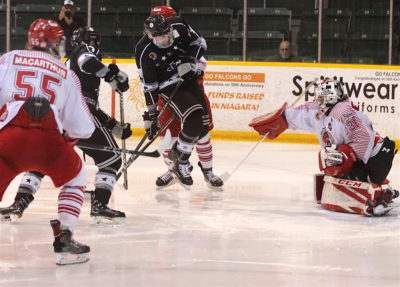 “It’s on our veteran guys. Guys I brought in are letting the team down.”

The Falcons will be without one of those veterans, Liam Dunda, who took a needless slashing major late in the game and will be suspended for Game 3.

“I bring him in specifically for this series and now he’s out,” Girhiny lamented.

Falcon facts: Carson Edwardson, Zach Lawrence (sick), Dakota Miskolczi (suspension), Perth Swick, Tristian deJong and Jack Venneri did not dress for the Falcons  . . . Bailey Fletcher, Brad Lindsay and Jeff Linsday were scratched for the Corvairs . . . Tickets for Game 4 will go on sale Monday at 4 p.m. at the box office . . .The Corvairs lost leading scorer Jesse Barwell early in the first for a hit on Dante Felicette. Barwell was given a five-minute major for check from behind. Later in the period Felicette was assessed a minor and misconduct for a head check.

BPSN Star of the Game: Caledonia forward Eddie Schulz with a goal and assist.