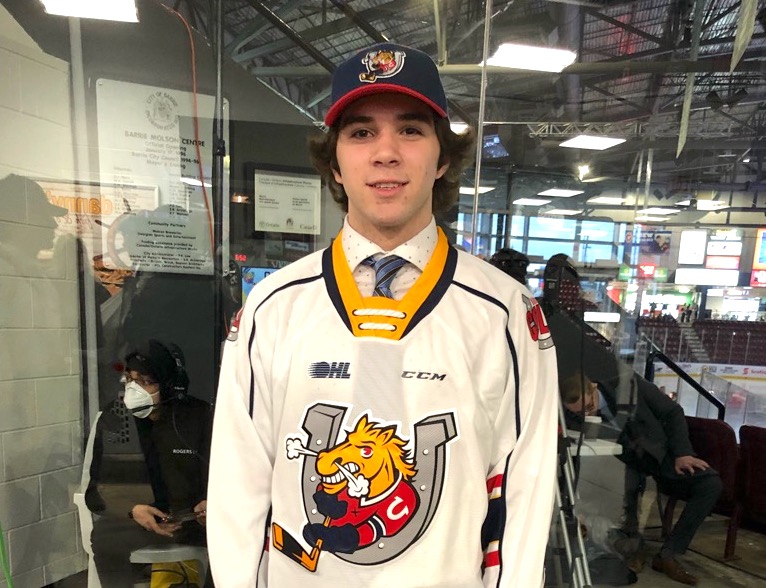 On Monday night, Parker Forlin got a look at what he’s hoping will be his hockey home for the next four or five or five years.

The 16-year-old Niagara Falls native, who was drafted in the fourth round, 73rd overall by the Barrie Colts Saturday in the Ontario Hockey league draft, travelled to Barrie Monday.

“They had a ceremony for all the players who were drafted. We got a jersey, we got to go on the ice and it was  an amazing experience,” the Niagara North Stars under-16 AAA player said. “All the fans in Barrie got really loud for us and it was really exciting.”

Forlin and the rest of Barrie’s draft picks were given a tour of the Sadlon Arena and met the coaching staff.

“It’s a great city and they have a great fanbase up there,” he said. “I have heard a lot of great things about their coaches and all their staff and I am looking forward to getting started.”

“It was obviously an exciting moment for me. I was sitting in the living room with my mom and dad wondering where and when I would go and when I finally went, my parents (Robin and Dennis) were both excited and my sisters (Paris and Briar) came down and congratulated me.”

Plenty of thoughts were swirling through Forlin’s head when his name came up on the computer screen.

“My first thoughts were that the hard work is finally paying off and when I saw that it was Barrie, I was thinking that I would be moving away from home and I would miss my parents,” he said. “They have worked so hard for me and hopefully one day I can pay them back any way I can.”

The 5-foot-7, 157 pounder, who was second in scoring for the Niagara North Stars with 24 goals and 42 points in 23 games this past season, has a goal of making the team this fall.

“I have worked hard for this all of my life and to see that finally come true is exciting. My first goal is to make the team and then my second goal is stepping on the ice and playing with them.”

He is going to continue to work hard in preparation for his first training camp with the Colts.

“Obviously I have to get bigger, stronger, faster but for me the most important thing is getting faster to keep up with all the guys. It is a fast-paced league.”

He is looking forward to the entire experience.

“It is getting to Barrie and showing the coaches why they picked me and why they should pick me to be on the team this year.”

“They’re two really skilled guys who drove their teams,” he told Barrie 360. “We think those are guys that can really make an offensive impact down the road for us.”

The website Prospect Pipeline had Forlin listed as one of 15 prospects to watch heading into the 2021-2022 season.

“Although slightly under-sized, Forlin is a dynamic offensive machine. Not only does Forlin feature terrific speed and agility, but the youngster pairs a crisp, accurate shot with innate play-making abilities,” the website read. “As a multi-faceted centre, Forlin keeps his opposition on their toes due to his unpredictable nature when the puck is on his stick.”