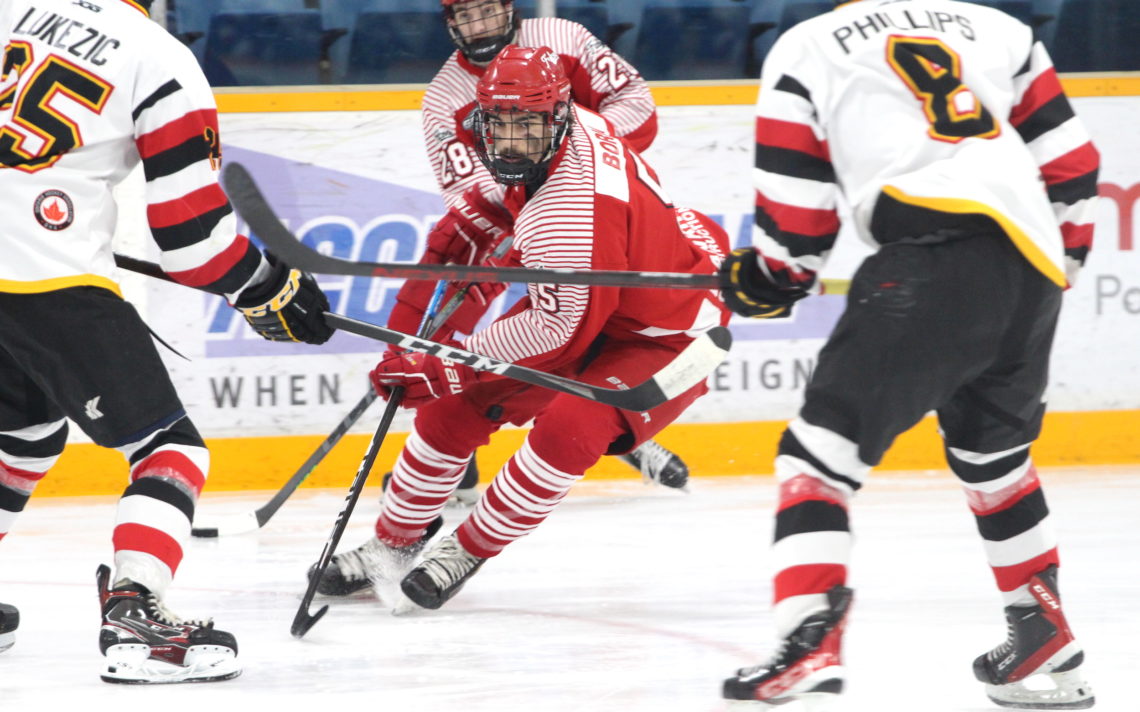 The Falcons dropped a 4-2 decision to the Hamilton Kilty B’s Wednesday night at the Dave Andreychuk Mountain Arena, their first defeat after nine straight post-season wins following four-game sweeps over the Pelham Panthers and Caledonia Corvairs.

“There’s no high too high, no low too low,” he said. “We try to keep the same mentality all three periods. We just came out a little slow.

“A little adversity never hurt anybody and we’ll get right back at it Friday.”

“I thought tonight we beat ourselves,” he said. “I didn’t see anything special over there.”

The Falcons finally got on the board later in the period when Boria scored on another spectacular individual rush, but the Kilty B’s countered when Justin Monteith netted his fifth of the post-season at the 18:20 mark on a rebound to restore their three-goal margin.

“It’s tough. Down three goals in the finals you shouldn’t be able to claw back but we challenged our guys to work and they did,” Bielby said. “As a coach, that’s all you want at that point. You can’t control what happened already. You can only control what’s ahead of you and we won the rest of the game once they got up 3-0.”

The Falcons, already without defencemen Olivier Desroches, who is sidelined indefinitely with an upper body injury sustained in Game 4 of the semifinal sweep over Caledonia, lost Mason Howard for a check from behind on Luke Johnston early in the second period. Johnston appeared injured but quickly returned and scored Hamilton’s second goal minutes later.

“It’s important to find ways to stay in the game,” Bielby said. “We missed 29 (Howard) down the stretch. We need to make sure we have six guys in the lineup every night taking short shifts so we don’t have to get down to four.”

Boria, Joe Colasurdo, Cal Reesor and Jordan Schanbacher all logged a ton of ice, but that’s fine with Boria.

“It’s the playoffs,” Boria said. “I need to go whenever coach calls my name. It’s what I’m here to do. Four D definitely doesn’t help, but it’s playoffs so it’s all fun and games.”

Referees Patrick Myers and Ryan Moniz put the whistles away for the most part despite a ton of stick work and physical play.

“I think tonight the finals started,” Bielby said. “The first game I thought there was a lot of feeling out but tonight both teams showed up with a little extra edge.”

Hamilton forward Luke Johnston with a goal and two assists.