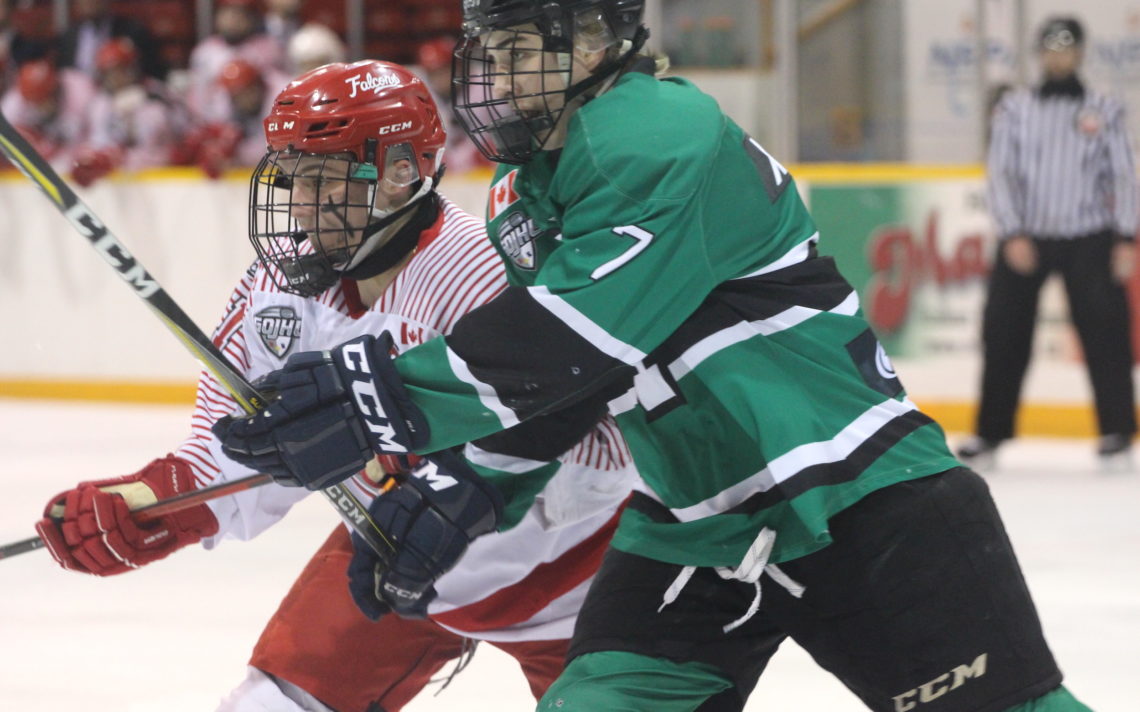 Andrew MacLean has more than exceeded expectations for the St. Catharines Falcons this season.

The 20-year-old backstop was brought in to provide top-notch goaltending after spending time in the Ontario Hockey League and the veteran backstop has done that and then some.

MacLean set a Greater Ontario Junior Hockey League record with 10 shutouts during the regular season and has maintained that standard in the playoffs.

The Michigan native earned his second shutout of the series and 12th overall this season as the Falcons blanked the Pelham Panthers 3-0 Tuesday night at Jack Gatecliff Arena to complete the four-game sweep in their Golden Horseshoe Conference, best-of-seven quarter-final playoff series.

“Every game is an individual challenge,” MacLean said. “I never think about how many I get in a row. Earlier in the year I had four or five shutouts in a row but I never thought about that going into a game. I checked the numbers here and there but it’s about getting a win and putting up a goose egg is part of the game.”

MacLean has loved every minute of his final season of junior hockey.

“When I first came here and talked to coach and (general manager) Frank (Girhiny) and they gave me a rundown of how the room was going to be and the atmosphere and it’s been all of that,” he said. “It’s run like an OHL program.”

MacLean was particularly sharp in the first period as the Falcons came out flat.

“When we came out and laid a goose egg he was the difference with us going into the second period with a lead,” Falcons coach Tyler Bielby said. “It should have been 3-1 Pelham after the first.”

Bielby has been impressed with MacLean’s commitment to excellence.

“It comes with the preparation,” Bielby said. “That’s a 20-year-old that came down from the IceDogs who could have packed it in and really enjoyed the year and had a good time with the boys, but he’s the first one on the ice, he’s the last one off the ice. He works hard to get better every day with Mr. Bedard (goaltending coach Jim Bedard) and you can see it.”

MacLean’s play has been a safety net for the Falcons

“It’s always important to have trust in your goaltending and I’ve had trust in both of our goaltenders all year. Mac lets us focus on the other side of the ice because we know he’s doing his job back there,” Bielby said.

The Falcons didn’t get going until the second period.

“I thought that first period was the worst period of hockey we’ve played as a team in a month, if not more,” Bielby said. “We challenged the boys in between and I thought the second period we dominated but we were undisciplined, so any time we were getting momentum we kept going to the box and going to the box.”

The Falcons now have 10 days off until Game 1 of the best-of-seven semifinals versus the Caledonia Corvairs.

“I think you make sure you take it as an opportunity to get better,” Bielby said. “We want to get right back to practice tomorrow, Thursday and Friday and again next week and make sure we’re preparing and getting healed up. If guys are banged up and need to nurse some injuries, then we’ll do that as well.”

MacLean is looking forward to the challenge.

Across the ice, the Panthers were packing up for the last time this year. Several of the graduating players took a few extra moments to sit on the bench and soak in their final minutes of junior hockey before peeling off their uniforms for the last time.

“It’s tough, a lot of emotions,” Pelham captain Jordan Tutt said. “At the end of the day we just have to be proud of what we’ve done. We’ve had ups and downs this year but I couldn’t be more proud of the guys we had. We battled through some adversity and we never let each other down.

“It wasn’t the outcome we wanted and it wasn’t the ideal season we wanted but we worked hard and we have an amazing group of guys.”

Tutt appeared to hold back his emotions when asked what he would miss the most.

“There’s too much — the guys, just being in the lockeroom, the competitiveness, the nerves showing up to the rink. There’s a lot that goes into hockey and a lot of people don’t realize it but you play it because you love it.

“It’s the 21st time I’ve done it and it’s never easy and it’s always tough when it’s the last game, whether you win or lose,” Toffolo said. “It’s their last time of playing competitive junior hockey and it’s very emotional for them. Some of them maybe won’t step on the ice again for years.” 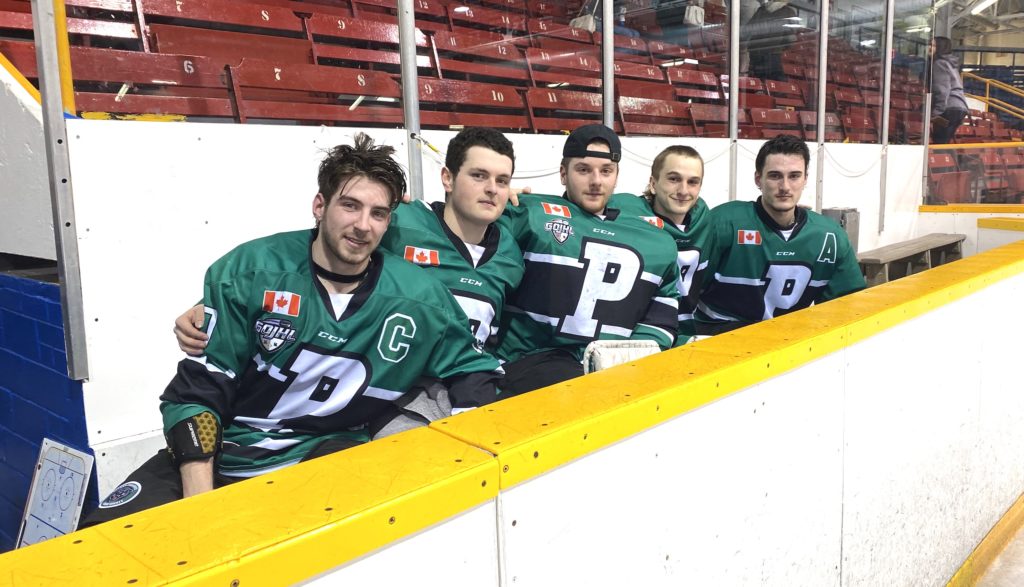 St. Catharines goaltender Andrew MacLean with 20 saves for the shutout.

Up next: The Falcons square off versus the Caledonia Corvairs in a best-of-seven semifinal playoff beginning Friday, April 22 at Jack Gatecliff Arena.