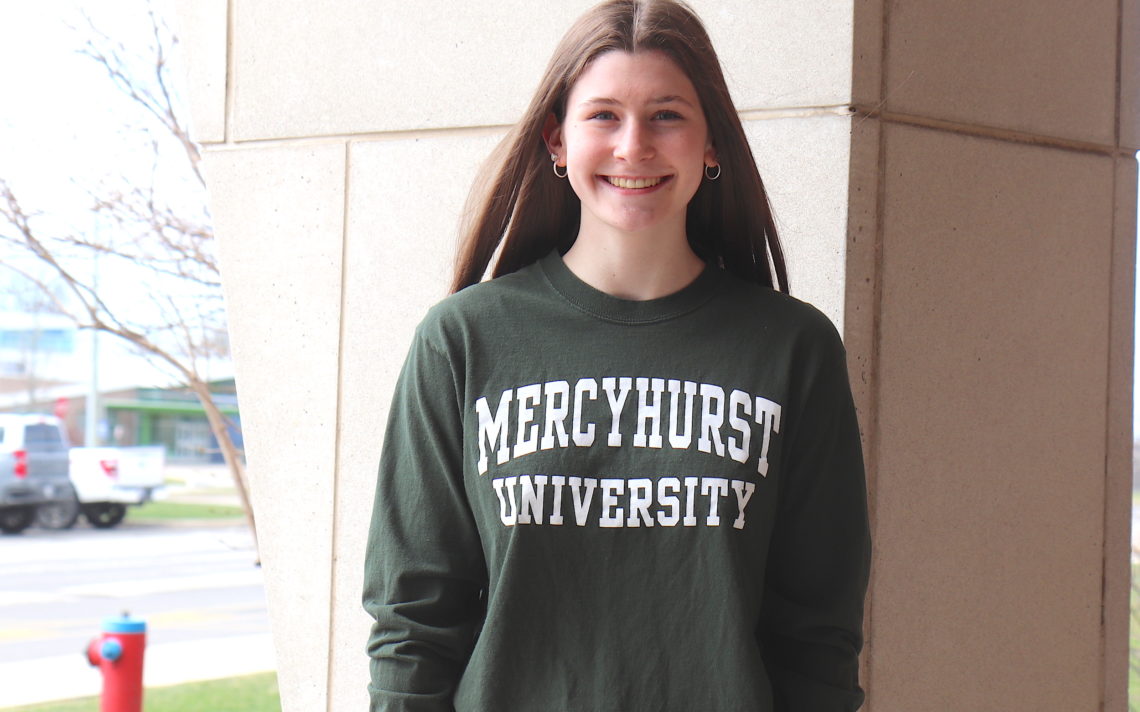 Henlee Mahoney’s hockey roots are as Canadian as you can get.

The 17-year-old Niagara Falls resident, who is committed to play hockey at Mercyhurst University in Erie, Penn., first picked up a hockey stick when she was four years old.

“The only reason I started playing is because the house we lived in had a pond in the backyard. My brother (Liam) was always playing so we joined for fun and stuff. Every winter, my dad would set up lights and I would have all my friends over. It was a lot of fun.”

It wasn’t long before she took her skills off the pond.

“My sister (Kylee) and I started to really like it and we switched to play in a house league.”

She grew up playing her travel hockey in Niagara Falls but two years ago she and Kylee decided to take the sport more seriously and go play with the Stoney Creek Sabres junior team.

“We have both always wanted to play at the highest level possible and Niagara couldn’t really offer us that any more,” she said. “It was one of the best hockey decisions that I have made.”

Mahoney realized she had an opportunity to play in the States when she first met up with Stoney Creek coach Brian Cleary.

“He saw the potential that my sister and I had and he was a good influence on the Mercyhurst coach. He reached out to Mike Sisti, the coach, and he got our names out there on the radar. Then they came to watch us.”

Her sister is already at Mercyhurst.

Because of a NCAA rule change, Henlee was allowed to commit or talks to schools after June 15 of her Grade 10 year.

“After that, I could have had a conversation with any other coach but coach Sisti reached out to me and really persuaded me,” she said. “I also visited the school with my sister and I knew what I wanted from a school. I wanted something that felt like home and wasn’t too big and Mercyhurst really offered that. I feel it is a really good fit for both me and my sister.”

She liked everything about the school.

“Everybody was extremely nice and I loved the environment and the hockey culture. And the campus itself was really beautiful. I just had that feeling about it.”

Having her sister there was an important factor in her decision.

“It is kind of a sense of comfort knowing that I will have someone to show me the ropes and guide me. I think we are closer than most sisters. We don’t really fight much. It is kind of weird

The Grade 11 student at Saint Michael was born in Baltimore and came to Canada when she was 10.

“It was easier because I have dual citizenship. I don’t have to get a student visa or anything like that.”

Mahoney is not sure yet what exactly she will major in but is leading towards a science degree.

The forward, who suited up on defence for her school’s Niagara Catholic Athletic Association championship squad, is planning to work hard to get ready for university hockey.

“My team does on- and off-ice training in the summer and that is definitely something that I will be doing. And once my sister comes home, we usually go to the gym three or four times a week to stay in shape.”

Her biggest adjustment will be getting strong enough to play against older women.

She has set realistic goals for her first season at Mercyhurst.

“I am not going to set too many expectations for myself because I know the jump from junior to the collegiate level is pretty big. I am just hoping to play some minutes here and there and have fun.”

She is hoping that the COVID-19 pandemic is done interfering with her training.

“It was stop and start because they would open and close again. It was really hard to get into a groove but I managed it pretty well just because our trainer my sister and I use is private,” she said. “We were lucky because we were able to go until there were total lockdowns. The inconsistency was the hardest thing.”