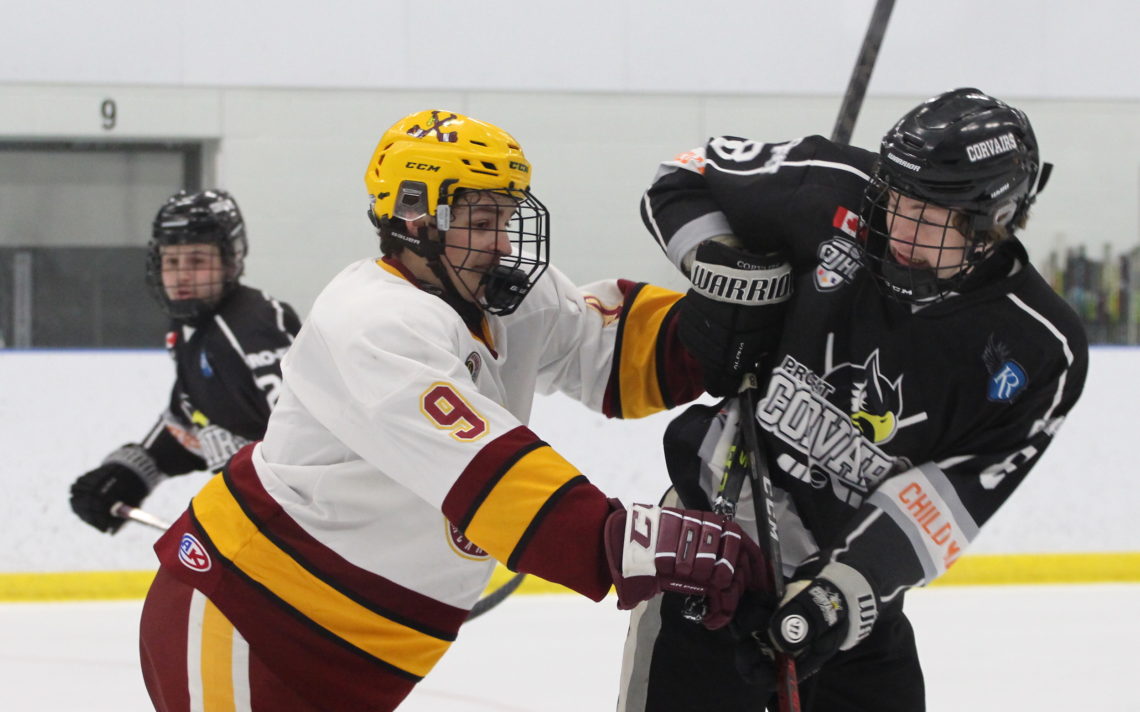 Blackhawks leave it all on the ice

For the better part of three seasons Noah Fortuna has been the epitome of consistency in goal while carrying himself with the class and dignity of a seasoned professional off the ice.

The 21-year-old Niagara Falls native joined the Thorold Blackhawks in a trade with the Niagara Falls Canucks in the 2018/19 season and quickly established himself as a mainstay between the pipes.

But all good things come to an end, and for Fortuna, the end came Monday night at the Vale Health and Wellness Centre in Port Colborne.

Fortuna kicked out 27 shots as the Blackhawks dropped a heart-breaking 4-3 decision to the Caledonia Corvairs.  The Corvairs sweep the best-of-seven, Greater Ontario Junior Hockey League, Golden Horseshoe Conference quarter-final playoff series 4-0 and advance to the semifinals which are slated to begin next week.

“You just don’t think it’s ever going to come to an end, especially when you’ve been playing for 15 years or whatever,” Fortuna said. “I’m just kind of soaking it in right now. I’m sure by tomorrow it will hit me.” 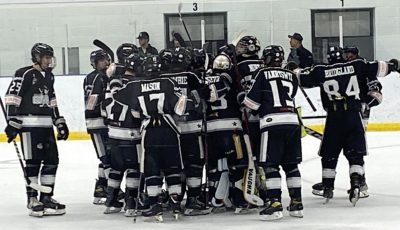 Fortuna didn’t hesitate for a second when asked what he will miss the most about playing junior hockey.

“I think just the friendships you make every year,” he said. “For the most part you get almost 20 new guys every year and you get to regroup and you’re best friends for a year.

“I’m just going to miss coming to the rink everyday.”

Fortuna, who attends Brock University, isn’t quite sure what the future will bring as far as playing at a competitive level again.

“I don’t know yet. As of now, probably (not), but you never know what will come up,” he said. “I’ll keep playing for sure though. I’ll never stop playing.”

Thorold coach Scott Barnes is a big fan of the way Fortuna goes about his business.

“He’s irreplaceable,” Barnes said. “It’s not only his on-ice. It’s his character and the way he conducts himself in the room and just everything about him. We’re going to miss it.

“He’s our unofficial captain and a leader. The guys love him in there.”

Captain Cooper Lobsinger and forward Nathaniel Krbavac also graduated and Lobsinger did it was a bang, dropping the gloves with Caledonia’s Josh Russell less than five minutes into the game.

After the game, Barnes said the Caledonia coaching staff were on the lookout for Lobsinger to pay their respects.

“I think our team gained a lot of respect from those guys through this whole series the way we fought back and held our own,” Barnes said. “I know it was a four-game sweep, but they had a series.”

Fortuna appreciated the efforts of his teammates to extend the series.

“They played really well. They knew they were in this situation and they put everything they into it out there,” he said. “I think we deserved to win tonight.”

Down 3-1 after two periods, the Blackhawks went down swinging in the third starting with a power-play goal at 13:17 by Jack Sykes following a five-minute major to Caledonia’s Markus Dempewolf for charging on a play which knocked Thorold defenceman Owen Caldwell out of the game.

Less than a minute later Noah Baltzer scored a short-handed marker for the Corvairs to restore their two-goal lead but Sykes then potted his second of the period to draw the Hawks back to within one again.

With Thorold pressing for the equalizer, Dylan Coers was called for a head check with 33 seconds to play, effectively ending Thorold’s hopes of a comeback.

“I just told the boys I’m extremely proud of the way we battled,” Barnes said. “I think Game 1 we could have won and I think Game 4 here we could have won. I think in Games 2 and 3 I think they took it to us and physically wore us down but the way our guys responded today . . . they could have easily folded the tent and said they were done but they fought and that goes by the leaders we have in the room. They played for the 20-year-olds tonight. It was nice to see.”

Up next: The Corvairs advance to the semifinals next week.