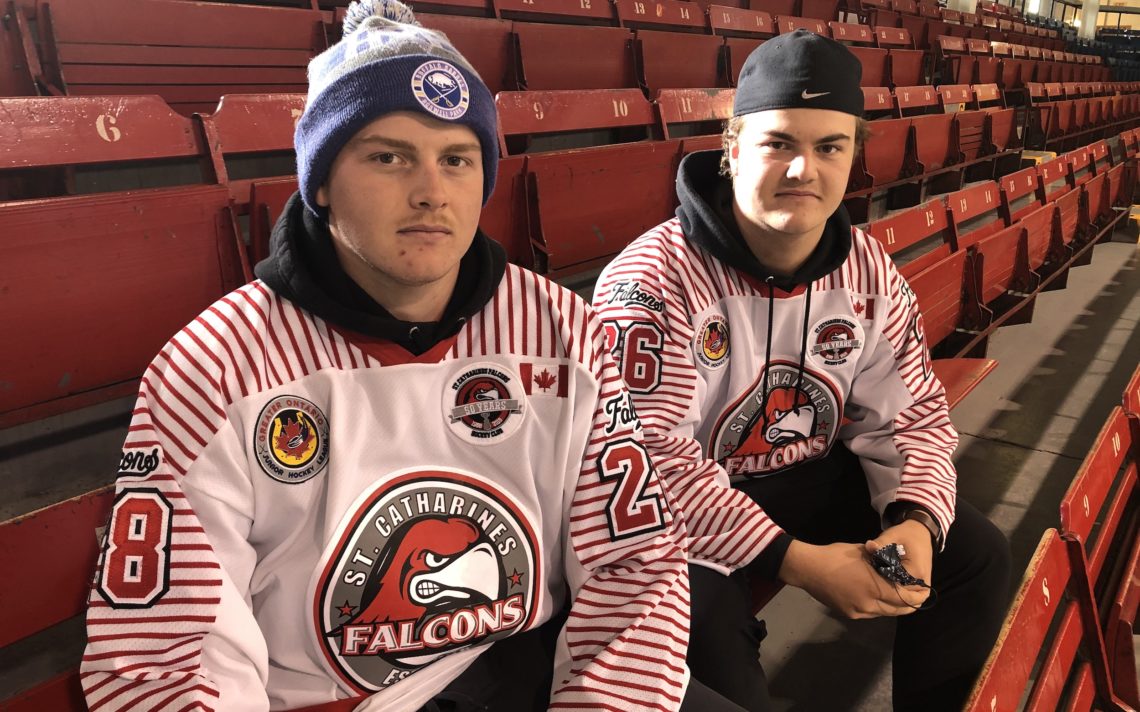 Trent Glenney, left and younger brother Kyle Glenney are looking forward to being teammates with the St. Catharines Falcons this year. Photo by: BILL POTRECZ

Trent Glenney and Kyle Glenney are as close as two brothers can be. The Dunnville natives grew up playing hockey together in the driveway, basement and on a backyard pond, hit the links together in the summer, and attend Brock University.

This season, the Pelham residents will also suit up together for the St. Catharines Falcons, although both agree they bring unique skill sets to the ice.

“I think we’re very different players,” said Trent, a 19-year-old forward, who is entering his second season with the Falcons. “He’s a little more offensive than I am. He’s got a better shot — anybody out here will tell you that. I think I’m a little more defensive minded.

Kyle, an 18-year-old winger, agrees with his older brother.

“I think I have better shot and touch around the net but he’s a better all-around player. He’s a big body and he’s a leader. He was our captain from midget. He’s always been a leader and guy to look up to on the bench.”

The brothers played together only once before, two seasons ago when Trent was in major midget and Kyle was a minor midget.

“It’s good for us to be able to play together. We’re close as brothers so it’s good for us on the ice working together,” said Trent, who is majoring in sports management.

Kyle, who is studying kinesiology, got into a handful of games with the Falcons last season as an associated player and is looking forward to a full season together with his big brother.

“I’m excited and I know my parents and grandparents are (excited) to be able to watch us play at the same time,” he said. “My teams (in minor hockey) would train and he would train with us so even if we weren’t playing together we were always around each other’s teams.

“We’re always together so it’s nice to be able to put it all together.”

Trent joined the Falcons last season after a solid season at the major midget level with the Niagara North Stars and collected seven goals and 17 points in 41 games.

“Trent is a good pulse of the Falcons organization in the way he approaches things. We know what we’re going to get out of him,” Falcons coach Tyler Bielby said. “We’re going to get 110 per cent commitment, a good attitude, a good teammate.

“He’s very responsible defensively. We put a lot of weight in what he does on that side of the puck, particularly at the centre position. He plays well underneath the puck and controls his skating to make sure he’s not too ahead of the puck.”

Bielby feels there is more upside for Trent to contribute offensively as well.

“I feel like he could have scored 20 goals last year without an injury. I feel he has potential to do that this year. It’s an interesting year for him because is he that 20-25 goal scorer? I think that is in him. He’s a big part of our forwards and will see a lot of top-six, top-nine forward minutes.”

Trent admits he feels much more comfortable heading into his second season of junior.

“I have more confidence I think going through a year and playing here with some of the older guys,” he said. “They show you the ropes and how to play correctly and do the little things right.”

“I don’t think I’ll ever play for a coach like Marty with what he’s done and he’s definitely given me a lot to be able to make the jump this year,” Kyle said. “I think it will be a little more difficult and a little less time with the puck but for the most part after AP-ing for a couple of years at the junior level it will be an easier transition.”

Bielby is confident Kyle will be able to put the puck in the net at the junior B level.

“Nobody shoots the puck harder,” Bielby said. “He has just as hard a shot as anyone in the league. The expectation is for him to play a big role and to contribute offensively for us. That’s why he’s here and we expect him to get those things done. With his man-size and man-strength, he’ll be just fine.”

The Falcons visit Niagara Falls Friday and host the Canucks Sunday for a pair of scrimmages. Games are not open to the public due to COVID-19 restrictions.

The games will be five-on-five with no contact with a combined total of 50 players, coaches and team personnel permitted to participate.