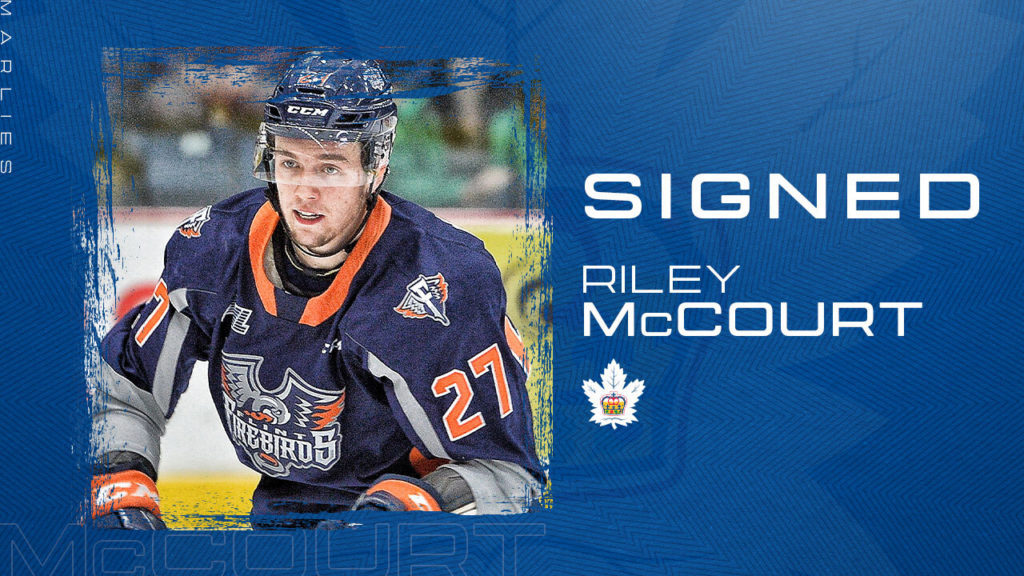 Riley McCourt is living the dream.

The 20-year-old St. Catharines native grew up envisioning himself playing professional hockey and recently saw that dream come true when he signed a two-year American League contract with the Toronto Marlies.

“It’s exciting. For me as kid growing up around hockey, it’s what I wanted to do my whole life,” McCourt said. “There hasn’t been a moment when I thought what I might do outside of hockey. It’s been my life for as long as I can remember. To continue that journey, I’m honoured and humbled and I’m excited to see where it goes from here.

“It’s something I’m thankful for and not going to take for granted.”

Before the season, McCourt sat down with his father and the coaching staff in Flint and mapped out a plan to give him the best shot of turning pro.

“They gave me list of things I had to work on. I tried to work on those things and work hard every day and it worked out,” McCourt said. “At the start of the year I had that goal in the back of my mind. Hopefully I was ready to make that step, make that jump.”

McCourt is well aware the work has just begun.

“I’m working towards it and working hard every day to be able to be ready to make that jump,” he said. “I’m confident in my abilities and I know what I can do and how tough it is to play at the professional level and be a professional hockey player.

“I know pro hockey is a different game and I have a lot to learn and areas I need to grow to make that step.”

McCourt began skating and working out at the Maple Leafs practice rink in Etobicoke last week and was blown away with the facilities and organization.

“I’m skating once, twice a day and in the gym working on getting stronger and putting on lots of muscle,” he said. “It’s tough but they have a great staff and great facility and player development people.

“It’s first class so I’m excited to continue to work out with them.”

McCourt is also working with a nutritionist.

“They set a meal plan in place for me so I can put the right things in my body to give me energy at the right times and help me build muscle.”

McCourt admits being part of the Maple Leafs organization is particularly special.

“Obviously it’s an honour to be part of that organization. It’s a historic franchise and it’s close to home too which is something that every kid dreams of. Just having it play out like that is exciting.”

McCourt played for the Niagara North Stars before moving on to Ridley College followed by a season of junior B with the St. Catharines Falcons.

McCourt then spent half a season with the Hamilton Bulldogs before being traded to Flint.

“It’s been crazy. It’s been a whirlwind. It’s been something that I haven’t really had a chance to sit back and look at yet,” he said.

McCourt hit his stride with the Firebirds.

“I played roles that were definitely substantial in my development and my confidence. It wouldn’t have happened without everyone in Flint and Hamilton for sure,” he said.