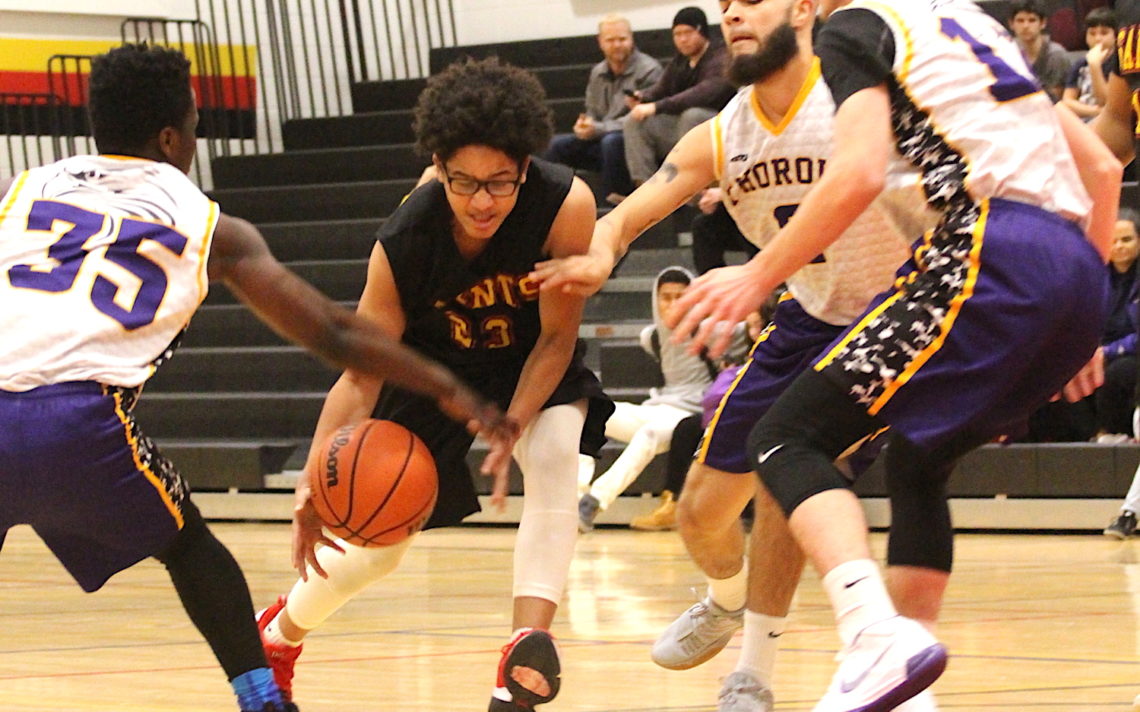 The road to the basket goes through Alec Young for the Thorold Golden Eagles.

The 18-year-old, Grade 12 student is the Eagles’ primary distributor, a role he relishes and fills more than capably.

Young was at his best Wednesday running the offence as the Eagles defeated the St. Catharines Collegiate Saints 67-48 in a District School Board of Niagara senior boys basketball game played at the Collegiate.

“Sometimes it can be hard when people don’t move but normally I can find someone.”

Young scored eight points Wednesday — an unofficial estimate since the game sheet was not recorded properly — but isn’t concerned with points.

“I’ve had Alec as a student and it’s the first time I’ve had him as a player on my team and I’m really impressed,” said Dupont, who moved up to senior this season from junior to help head coach Jon Kwiatkowski. “He’s not a loud guy but he listens to whatever we try to do at practice and he’s such a great role model on our team. When we ask him to do something, he goes out and does exactly what we want.”

Dupont loves the way Young can dictate the pace of a game.

“On the floor, he’s that calming presence,” he said. “He’s a good leader and plays some tough minutes.

“He does all the little things. He gets a lot of assists and rebounds and a lot of steals. He might not light it up on the scoreboard like some other guys, but he’s an invaluable member.”

Dupont says Young knows his role, which rubs off on the other members of the squad.

“The reason why we’ve been pretty successful so far is because we’ve bought into the team concept,” he said. “When you have your third-year, senior guys out there and instead of going in for layups he’s looking to pass the ball, it’s contagious and other players see it and the other guys are making that extra pass.”

“We started off really slow. Normally, we are better but we came around,” Young said.

Jake Stirtzinger added 16 for the Eagles while Devon Maltby chipped in with 13.

Jerrell Plumadore had 13 and Clayton-Thomas Harris 11 for the Saints.