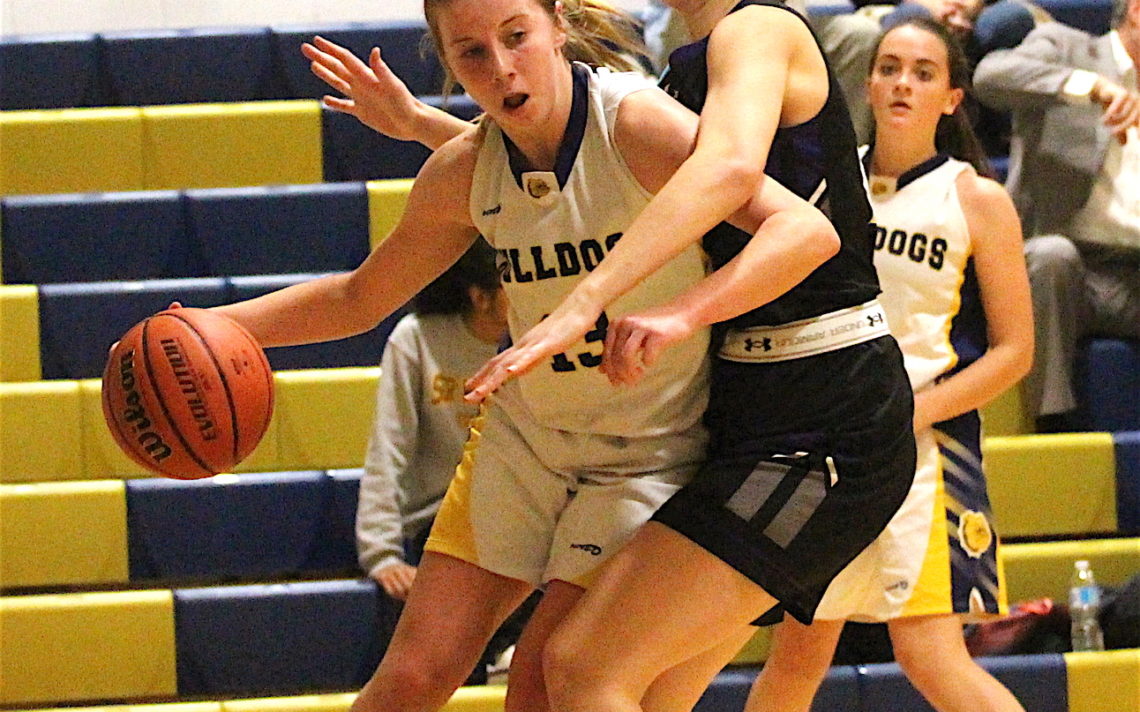 Churchill’s Ally Sentance, shown in this file shot, had 27 points as the Bulldogs fell 58-50 to Dundas Valley in the SOSSA senior girls AA basketball final. Photo by BERNIE PUCHALSKI.

“I can’t complain about the season because there were a lot of positives and a lot of experience gained but definitely in the finals, our nerves really showed and their (Dundas Valley’s) experience paid off,” Churchill coach Frank Keltos said. “The kids didn’t give up and even with a minute and 30 left and down nine, we thought there was a shot.”

“Ally played phenomenal and we would have lost by 40 if she didn’t have the game she did,” Keltos said. “She played like a Grade 12 but at times, with her being 14 years old, she showed her youth with a few turnovers that a more savvy player would think that that’s not a pass to make.”

Sir Winston Churchill made it to the SOSSA finals with a hard fought 59-53 victory over the Centennial Cougars.

DeMont led the way for the Bulldogs against Centennial with 21 points, including 10 in the final quarter. Janee Harrison added 14 and Olivia Krieger 11 for Churchill with Sentance and Nat Weber scoring five apiece.

Catherine Maltais topped Centennial with 24 points. Other leading scorers for the Cougars were Olivia Smith (10), Destiny Pacquin (10) and Kirstyn Atkins (6).

“The whole day was a day of nerves as we were really long or short on a lot of shots,” Keltos said. “You’re not really shooting the ball. You are kind of aiming it.”

Churchill struggled to hit shots all game and Centennial went on a run that had Churchill thinking its season might be coming to an end. But big shots by Harrison and Krieger with three minutes left helped the Bulldogs get back on track.

“I knew Phil (Mosley) was going to be prepared because he’s a great coach,” Keltos said.

“Coming back next year, of the nine girls I rotate, I’m losing one,” Keltos said. “I have eight strong players coming back and girls that were in Grade 11 this year got more experience and we’ll be 12 deep next year.”