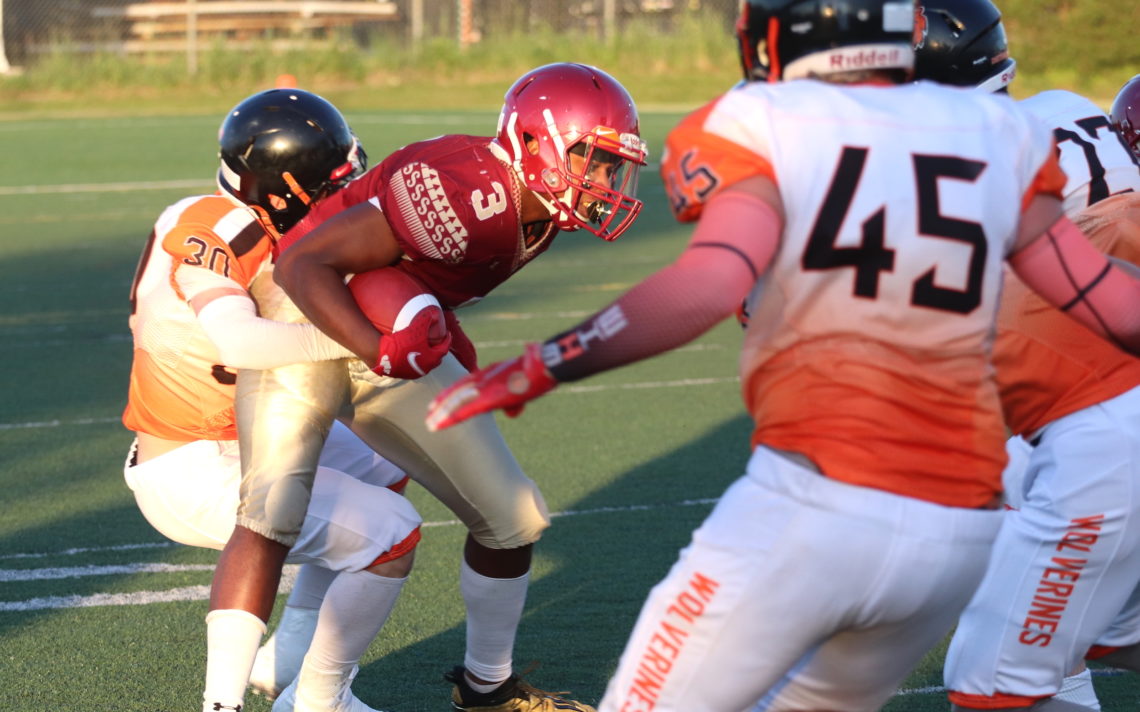 The Spears turned the ball over on their first possession and London scored en route to a 10-0 lead after one quarter and 27-7 at the half by the Junior Mustangs.

“It’s hard to open the game and, in under a minute, you’re down by seven on a fluke. We just need to take a breath and relax, play our game and don’t let them dictate the game to us,” Spears head coach Brian Duguay said. “The first quarter was tight with a lot of hard hits on both sides. You take away that misplay on the punt and we are down 3-0.”

Niagara’s first half score came on a 20-yard pass from Marshall McCray to Ryan Segato. Ryan Midany converted the major.

“The second half continued with the hard hits on both sides,” Duguay said.

London led 37-7 after three quarters before McCray finished off a long drive with a one-yard QB keeper converted by Midany. The Mustangs concluded the scoring with another major.

“We need to be consistent. We see a lot of great plays and then we will have a temporary memory loss which will result in a loss of yards or a long touchdown,” Duguay said. “I see lots of progression in our play but we need to believe in our abilities and live for the next play.

“All the coaches are really proud of the progress but we need to limit our mistakes.”

He was impressed with his team’s discipline versus the Mustangs.

“London took a lot of penalties and our players kept their cool.”

Leading the way on offence were: McCray 6-13 passing with a TD pass and seven rushes for 60 yards, including a TD run; Jacob Tessier with seven rushes for 66 yards and three receptions for 67 yards; and, Segato with a 20-yard TD catch.

The Niagara junior varsity Spears were blanked by a tough London team.

“The Spears fought hard and played tough from whistle to whistle,” coach Grant Owen said. “The Spears will regroup, put the loss behind them, and prepare for the next game at the Hamilton Junior Tiger-Cats.

“The Niagara Spears bantam team competed this week against very formidable team in the Burlington Stampeders,” Spears coach Austin Huh said. “The boys worked and prepared very hard for this week’s contest against the Stampeders but ultimately came up short.”

“The coaching staff would like to acknowledge all the parents, family members, friends and the larger Niagara Spears organization for their continued support and display of solidarity,” Huh said. “The boys have demonstrated growth in the past four games and will continue to develop as the season progresses. The bantam Spears’ staff are proud of the entire team and we will be ready to go to work again this Tuesday.”

Niagara is on the road Sunday against the Brampton Bulldogs.