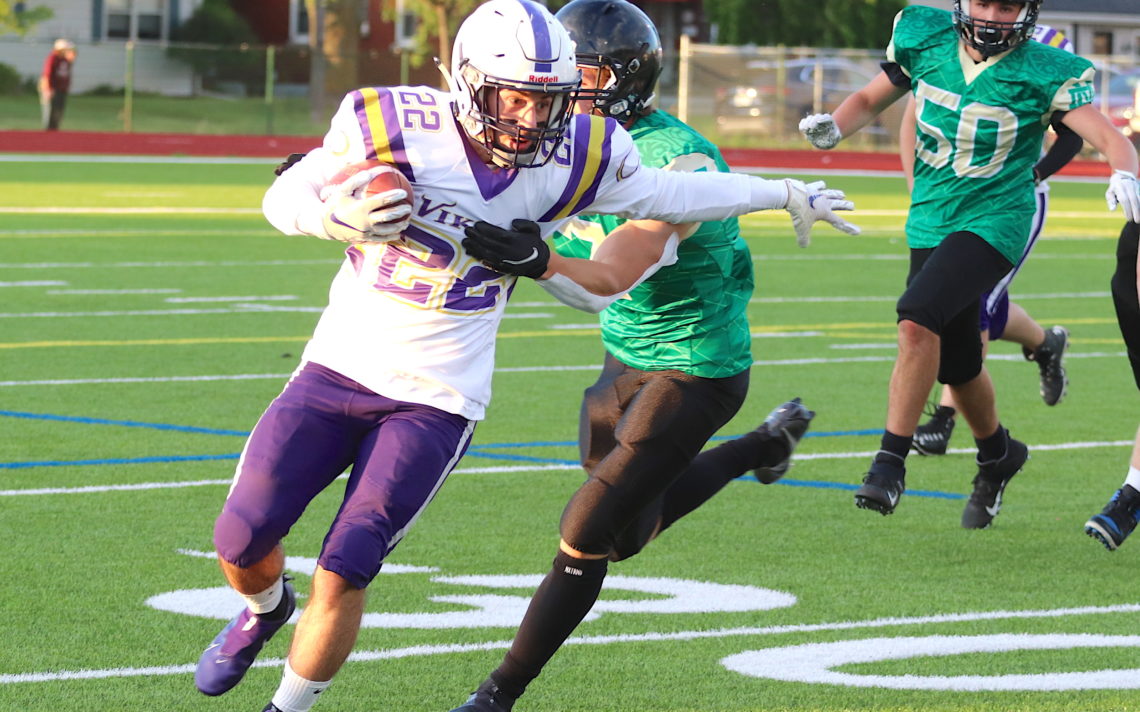 Football is alive and well in Niagara judging by the reaction to the Niagara Regional Minor Football Association’s summer varsity house league for players in Grades 9 through 11 this past high school year.

Last Thursday night at A.N. Myer was the second week of the league’s regular season and it was an event. Nearby streets and the Myer parking lot were full of cars, the stands were packed with spectators and the players on the field were having a blast.

“It has been fantastic and the response has been great,” NRMFA president Kent Wakem said. “We were only expecting maybe four teams and to have five teams is really good. There are a lot of kids out which is good.

“Next year we expect it to continue to grow and we are hoping for eight to 10 teams.”

Word of mouth will help that growth.

“We are expecting high school coaches who see how well it is run this year to promote it next year,” he said.

The association felt it was important to create the league.

“Several of us coach high school in the fall and we saw a need in regards to the number of players who actually got to play post-COVID,” Wakem said. “There was a skill discrepancy and with travel ball there’s only a select number of kids who get to play. We can see there is close to 200 kids who want to be playing on top of that. Because a lot of (high school (programs) have diminished the Grade 9s and 10s actually get to see field time here.”

There are two teams made up of primary Myer players (Chargers and Vikings), one team of Notre Dame and Centennial players (Irish), one team of mostly GFESS players (Gryphons) and a St. Catharines team (Knights) made up of players from a bunch of high schools.

“It’s great to see all these athletes out here and the buy-in from the coaches is great too,” Wakem said. “Some of our executive members are coaching some of the teams and then there are some community coaches. That helped balance it out.”

There are also high school players involved in the coaching

“It helps those kids get a little more knowledgable about the strategic part of the game.”

Games are being held at the GFESS, Myer and Centennial turf fields and it’s being played under regular football rules with one exception.

“We decided to eliminate the kickoffs so coaches could focus on offence and defence. Also, what is the point having a Grade 9 up against a Grade 11 trying to make an open field tackle,” Wakem said.  “It is exciting for the players and you can see that they are getting excited about it.”

Myer head coach Dave Buchanan is a big proponent of the league.

“We are excited to have the opportunity for our young players to get a lot of reps this summer. With a smaller roster size and equal play, it’s a great way to have all players play and improve on their football skills,” he said. “This also gives all of them a feeling like they are contributing to the team’s efforts.”

The Myer teams have a few Saint Paul players and one Stamford athlete. Coaching is being done by Myer coaches and players coming off their Grade 12 seasons with the Marauders. Eugene Park and Matt Newton are running the Vikings’ defence, Tyler Goforth is in charge of the Chargers’ offence, and Arden Martinez and David Arevalo-Reyes are coaching the Chargers’ defence.

“The main focus is to give kids the opportunity to play the game, develop some skills for the future and have fun with their friends,” Buchanan said.

Greater Fort Erie coach Dave Sauer also loves the league. He also coached when the NRMFA ran an eight-on-eight varsity league the year before COVID hit. His squad, made up of all GFESS players with the exception of one player from Lakeshore Catholic who lives in Fort Erie, includes 11 Grade 9s, 15 Grade 10s and 14 Grade 11s.

“It’s huge for our program. Our Grade 9s are getting playing time, reps and practice reps; all the things they might not have seen in the previous fall,” he said. “For the Grade 10s moving up to senior, they get to see what senior ball is like. They will be ready to go in August, It is tough for Grade 11s to get on the field in senior football and they will be prepped and ready. It is exciting.”

Sauer describes the league as awesome for his program.

“We will notice a big difference in August and once we got into September, especially after COVID hindered our progress,” he said. “A lot of them have never seen football or played on a field and now I have Grade 9s playing and practising hard. It has been great.”

His son, Garrett Sauer, is enjoying the league.

“It gives us a huge advantage over other teams. It gets our fundamentals down and is so helpful,” the Grade 11 student said.  “And it is fun to play football all year. I could never get tired of playing football. Football has been a lifestyle for me, it is part of me and I am a big football guy.”

Garrett feels the league is physical and teams are playing for keeps.

“It is equally as intense as high school football because although it is technically not high school, we are prepping for high school and we take it seriously. We want to win and the other team wants to win.”

In games this past Thursday, the Chargers beat the Gryphons 34-17 and Vikings topped the Irish 33-0.

“Our Chargers started off slowly not being able to stop their option run but we managed to adjust our defensive strategy to slow that down as well as make some adjustments on our O line to open up holes for our run game and hold the line for our passing game that stared to connect later in the game. That proved to be deadly,” the Chargers coaching staff said.

Leading the way for the Chargers were: Evan Goforth with three touchdowns catches from quarterback Thomas Somerville QB and a two-point conversion on a catch; Dante Damario with a 10-yard pass and run TD from Somerville; and, Julian Mangiacasale with a five-yard rushing major, a two-point convert on a run and a ton of rushing yards that opened up the field for the Chargers to start passing later in the game.

“He made an incredible impact for our team.”

For the Gryphons, Hunter Van Vlak had TD runs of five and 50 yards and Bo Train booted a field goal and two extra points.

“We jumped out to a quick start and had a half-time lead. The offence and defence played well and then Myer made some adjustments and we made some mistakes,” Dave Sauer said. “We gave Myer the ball twice inside our 40 and that hurt our defence. Overall our players are getting better and I am proud of their efforts this week. We cleaned up the stupid penalties and there were positives to the game. On to next week.”

Leading the Vikings to victory were: Ben Maglicic with TD passes of five, 30 and 40 yards; Graham Walters with TD grabs of 15 and 40 yards; D’Angelo Holness with a 30-yard TD catch; Marco Grusso with a 90-yard pick six; Jonathan  Colcuc with a field goal, three single-point converts and a two-point convert; interceptions by Johnny Baka and Eric Corriveau; and, strong linebacker and DB play by Nate McAlpine and Kensin Lambert; and, effective running by Mitchell and Ethan Casucci.

No information was available for the Irish.