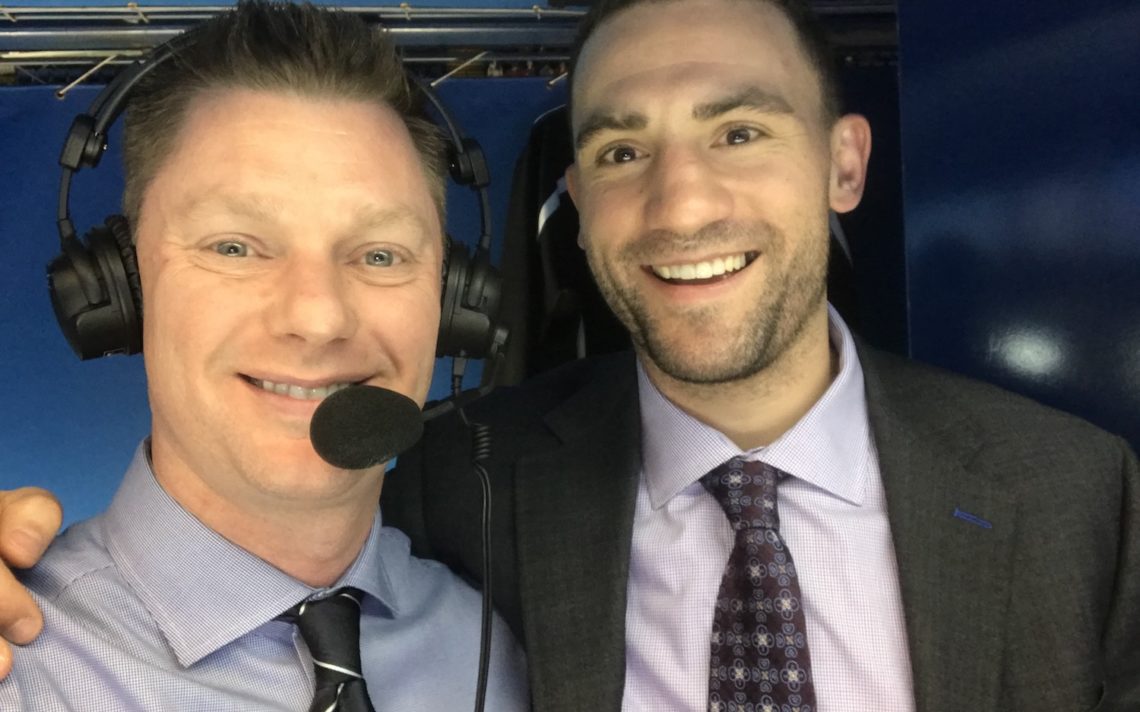 Derek Wills, left, and Welland’s Paul Bissonnette, who is a member of the Phoenix Coyotes broadcast crew. Photo: Special to BPSN.

The 41-year-old Port Colborne native is in his fourth season as the Calgary Flames radio play-by-play announcer on Sportsnet 960 The FAN, but the road to the NHL wasn’t easy and it certainly wasn’t quick.

Wills spent 13 seasons as the senior director of broadcasting, communications and team services for the Hamilton Bulldogs of the American Hockey League before getting his big break.

The stars certainly aligned for Wills to be hired by the Flames, but only after an interesting series of events.

Wills began his broadcasting career locally calling Golden Horseshoe junior B games through the company he founded, Sportscaster Broadcasting. He also did games on local cable working as both a play-by-play announcer and host.

“I created a job for myself buying air time from stations and St. Catharines and Niagara Falls and working it out with league to broadcast their games,” he recalled. 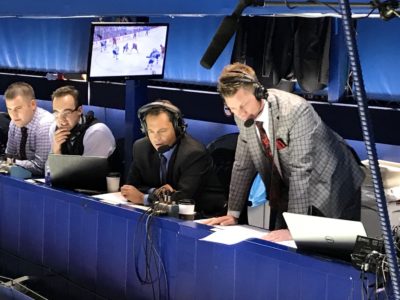 Wills has fond memories of that time in his life. He lived at home and was consumed with finding a way of earning a living as a broadcaster.

“When I think back about those days, they were some of the best days of my life,” he said. “I was doing what I loved and was at a point where I didn’t need to make a lot of money. It was just about trying to start a career.”

Wills got his first break when he was hired in Hamilton.

“I got lucky I got Bulldogs job when I did. I was the youngest guy in the league at the time and probably didn’t deserve to be there the first couple of years, but they stuck with me.”

Wills did a lot more for the Bulldogs than just call their games, which is the norm for broadcasters in the minor leagues.

“In the American League, I was doing 12 different jobs. Really the broadcasting in a way was last,” he said. “You had to get the team to and from games and on flights and busses and into hotels and that had to be my first priority. Communications came second and broadcasting in a lot of ways was third.”

Wills made a name for himself in Hamilton — he called more than 1,000 games — but had his eye on a job in NHL. He thought he was in line for a job with the parent Montreal Canadians but the call never came.

But for every door that closes another opens.

Wills credits his ex-wife for encouraging him to pursue the job in Calgary. He quickly applied but didn’t think much of it.

An hour later he got a call that changed his life.

“It all happened very quickly after that,” Wills recalled.

So Wills packed up and moved out west to begin his dream job. He replaced a local legend in Calgary, Peter Maher, who retired after calling 3,162 games for the club including their 1989 Stanley Cup victory.

“It wasn’t easy at first,” Wills recalled. “My ex-wife really didn’t want to go to Calgary and after eight months and me being on the road for 100 nights, on the personal side that cost me.

“On the professional side, replacing a hall-of-famer, he was the only voice the city ever knew for hockey. That was a challenge at first. Over the time the shadow gets smaller and I’ll start to establish myself as the voice for the coming generation.”

While Wills may no longer be responsible for travel and sending out press releases, that doesn’t mean his lives a life of leisure. He spends countless hours at the rink preparing for games, collecting audio and doing reports back to Calgary, and is also now a columnist on Sportsnet.ca.

“When we’re on the road, I go back to the hotel and spend the whole day prepping,” he said. “I do way too much prep — I probably use five per cent of what I prepare — but you don’t know what five per cent you’re going to need.”

At home, it’s more of the same on game day except Wills stays at the rink all day doing prep following the morning skate rather than travel back and forth twice to his home, which is about a 40-minute drive from the rink.

“They are long days, but it balances out,” he said. “I never got summer off in American League. I was going 100 miles-per-hour for the whole year. Now you go hard during the hockey season and then you get a break.”

“They try and make it as easy as possible,” Wills said. “We fly charter so don’t have to worry about airports and chasing the team around, but the travel out west is brutal. You get home at 3:30 a.m. and you’re back up again the next day. The travel can wear you out more than anything else.”

There are other perks as well.

“The NHL stands for the Never Hungry League. There’s always plenty of food around,” said Wills, who recalled using coupons on the back of Bulldogs tickets for fast food to help him survive in the AHL.

Wills finds it hard to get home, although, he has had plenty of visitors out west.

He makes sure to seek out other locals who have made it to NHL. He recently hooked up with Welland native and Nashville Predators goaltending coach Ben Vanderklok.

“I was telling him I Googled something and the old junior B message boards popped up and go look at them. It’s hilarious and how big the league was back then with games on TV and radio and great newspaper coverage. It was something.”