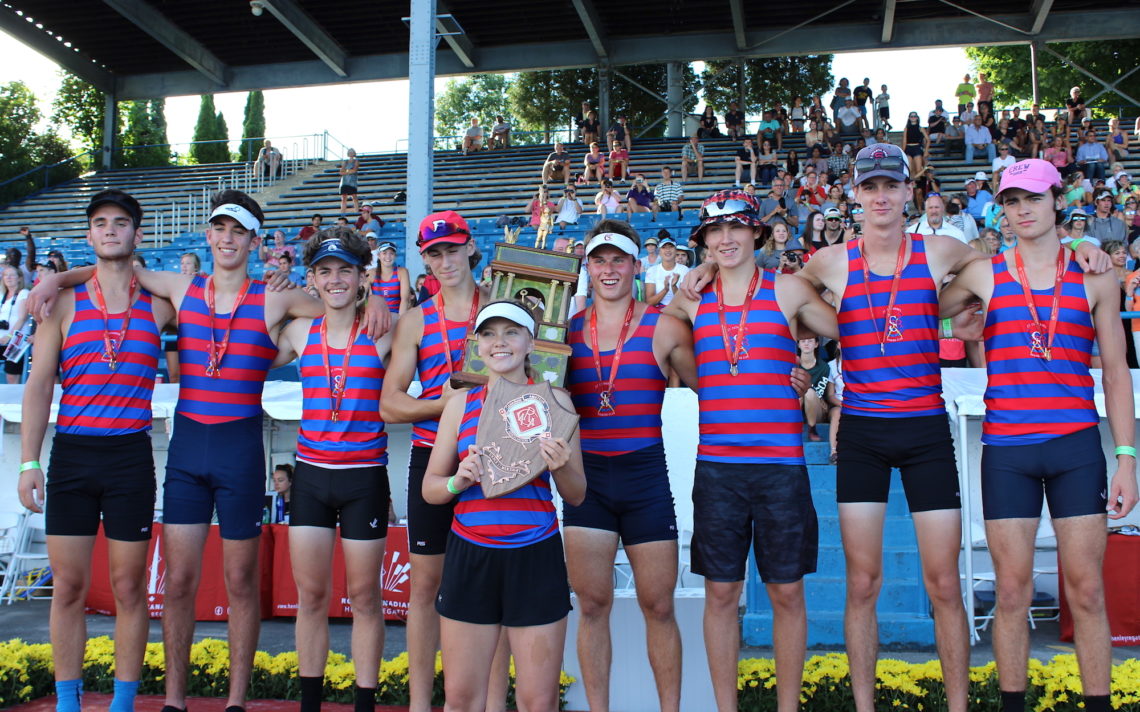 It took a while, but it was well worth the wait Friday for the St. Catharines Rowing Club’s men’s under-17 eight.

The victorious crew in its final at the Royal Canadian Henley Regatta had a lengthy wait at the grandstand before being called to the podium to receive Henley gold. There was some confusion whether there was a protest lodged for the eight race, but it turned out the protest was for the preceding women’s senior lightweight single race.

“We were a very strong crew and we jelled together really well,” said Prinsen, a Smithville resident who attends Blessed Trinity in Grimsby. “We have a lot of power between us and good technique, which pulled us to the win.”

The boat wasn’t one that came together at the start of the summer and kept rolling.

“With changes in the boat, it took a little time to develop, but it really worked out in the end,” Prinsen said. “We had many boat changes and many order changes, but two weeks before Henley we had three people join in and it really dropped our time.”

Prinsen was one of the incoming three, along with Chapman and Gondek, who helped the eight row through the competition all week.

“We consistently pulled ahead, but TBC (Racing from Washington) was often on our tails,” Prinsen said. “It was clean races and we had a good week overall.”

The Henley gold was the first of Prinsen’s young career.

The only other Niagara crew to mine Henley gold Friday was South Niagara men’s senior 64-kilogram coxed four made up of Jacob Coombe, Jacob Gula, Jeremy Langelaan, Alex Barnes and cox Riley O’Neill.

It was the first Henley gold for all the crew members with the exception of the cox, who has now won two.

“This was important for some of us because it is our last race,” Barnes said. “It means a lot more because a few of us are going to university and we are not going to row.”

Barnes and Coombe are both off to university in the fall and the Henley championship was a nice sendoff.

“I have been looking forward to this race all year and it is a great way to cap off the season,” Barnes said.

“It was a choppy race all the way through and a bit of survival, but we stayed calm and rowed our race,” Barnes.

Members of the boat also won the lightweight four at both Central Ontario Rowing Association regattas and placed fourth at the Ontario championships in the heavyweight four.

Through two days of finals at the Henley regatta, Winnipeg, Peterborough, St. Catharines, Argentina and Vesper are all tied with three victories.