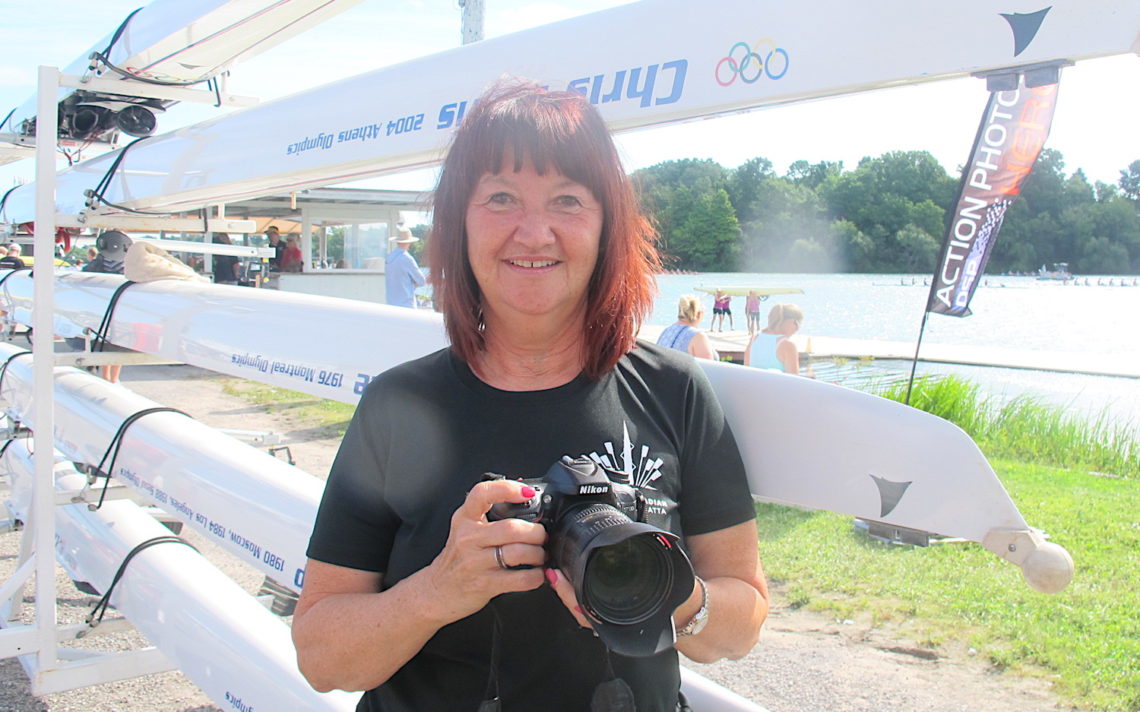 Spend even a few minutes on Henley Island and it’s likely you will spot Renate Hodges toting her trusty camera around.

The 65-year-old Port Dalhousie resident has been a staple at the Royal Canadian Henley Regatta for years as a volunteer taking pictures and acting as a media liaison.

“I think I was born with a camera. The first gift my father gave me was a camera,” Hodges smiled.

Hodges began volunteering at regattas when she was a secretary at West Park Secondary School. The school needed a staff member to help out at Schoolboy and she quickly signed up to handle the administrative side of things.

She began attending regattas and taking pictures and realized how grateful people were she was there.

“We would take pictures and when I got really involved with the rowing, I would always take my camera and did all the pictures,” she said. “I had the camera and that became a really big thing. I would start taking pictures to capture life on the island. People were happy. I couldn’t believe it.”

She hooked up with the Henley about a decade ago.

“They needed somebody to be the meeter and greeter of the media,” she said. “I will send out press releases and anything else that needs to be sent out.”

Between shots, Hodges helps out the media any way she can.

“I’m here from start to end and try to get them on the water and get the shots they need because I know it’s hard for them because they are so busy and have other events to cover,” she said. “I just wanted to show the happy side and the beautiful side of the regatta.”

Hodges said it’s not uncommon to get several emails thanking her for the pictures.

“I take a lot of emotional pictures as well. I know we’ve had some rowers over the years who were not well,” she said. “I cannot believe that they row. Good for them and the courage they have to carry on.

“We hear about these people and I try and make sure I get a picture for mom and dad so they have something.”

She has made a seamless transition to digital photography.

“Digital is different. Now it’s instant. It’s nice,” she said. “We didn’t have Facebook before. It was all prints and that’s what I would bring back to the school and it would be all over the walls.”

Hodges often teams up with her husband, Kevin Hodges, to make sure as many athletes are covered each day.

Hodges is proud to be a Henley volunteer.

“This regatta just happens with all these volunteers. I’m just one of them that is a part of it,” she said.

“I love going around to see the happy faces and the volunteers love it. There is a real happiness here when people are volunteering.”

“I think I have the best volunteer job on the island. We get to see the happy faces and everyone is so grateful. That’s what I get over and over again. It is a fun position.”

Hodges, who retired five years ago, also volunteers with her husband at the Folk Arts Festival.

“I did all these things when I was working and I can’t believe how I fit it all in back then,” she said. “When you’re retired you are so busy.

“This is how we give back. They all want their pictures.”

She plans on continuing to snap away as long as she can.

“It’s getting harder when I get on my knees on the dock to take the pictures to get up but I keep doing it. I think it keeps you young,” she smiled. “It’s like being part of a family, part of the rowing community.”