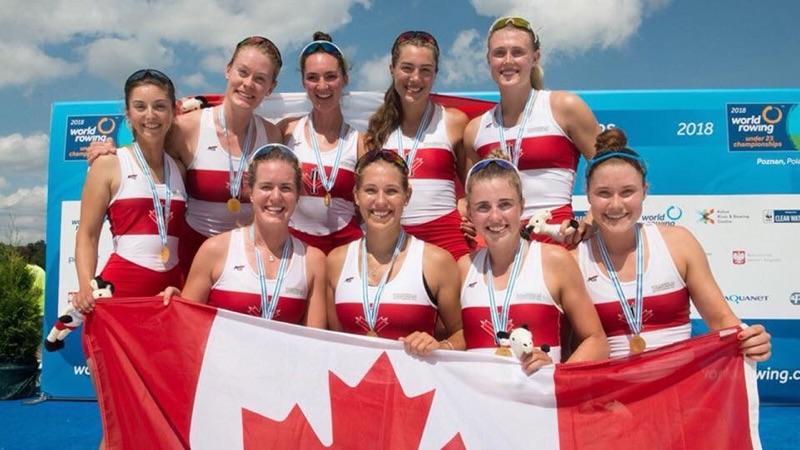 Member’s of Canada’s women’s eight celebrate after winning gold at the 2018 under-23 world championships in Poland. Photo special to BPSN.

A two-time Royal Canadian Henley gold medalist is feeling every centimetre of the 4,400 kilometres between herself and the 136th annual regatta taking place this week in St. Catharines.

“I really wish I had been able to stay home longer and be able to at least watch some of the events,” the 21-year-old St. Catharines native said. “It is always the best week of the summer and I always loved racing in it.

“It was great to have a ton of racing that week, have that experience and see how competitive it was. Henley is a great regatta.”

Rosts was home last weekend to serve as the maid of honour at her sister Mikayla’s wedding. The only unfortunate part of the nuptials was that it caused Morgan to miss the Canadian trials for the senior world championships this September in Bulgaria.

“My hope is to train with the senior team all year long and be able to make that team next year,” the Governor Simcoe alumnus said.

“Knowing how great it felt last year, we wanted to do whatever we could to have that same feeling,” she said.

Winning was quite different from last year when Canada entered the worlds as an underdog after not entering an eight in the event for quite a few years.

“No one knew what to expect and we didn’t know how fast we were going to be either. That was exciting, but there was a lot less pressure,” Rosts said. “This time we had a lot of expectations from ourselves and also from other people.”

She described those expectations as good pressure.

“I think we handled it well and used that to motivate us,” Rosts said. “We were excited to race and show what we could do on an international level.”

Having her second world championship gold medal hung around her neck was an unbelievable moment.

“It was such a cool feeling getting the medal and getting to sing the national anthem afterwards,” she said. “It was an honour to represent Canada and stand there with my teammates.”

What made the moment even more special was having her parents, Cheryl and Ted Rosts, on hand to watch the race. They hadn’t attended her first world championships.

“They have put a lot of time and money into my siblings and I doing all these sports. It was great to share the moment with them and be able to see it first-hand.”

She is the only member of the under-23 women’s eight that has moved on to the senior training camp because she was the only one who graduated this spring. She expects a few of her teammates to join the camp at Christmas or next year.

“We have done some training with the senior team in the past and they have been very welcoming and that has helped with the transition. But it’s hard being the only newbie.”

She graduated from the University of Virginia with a degree in speech pathology. As a scholarship rower, she had seats on the school’s varsity one and varsity two eights. At the recent NCAA championships, she was in the second eight that placed third and helped Virginia tie for fourth in the points standings.

“Things started to go pretty well my last couple of years at university and I was a lot more successful at it. I wanted to see how far I go,” she said. “I had two really great experiences at the under-23 level and I wanted to see how I would be able to transition to the senior team and if I could feel something like that again.”

In Victoria, she is staying with her brother, Ryan Rosts, until she finds a place of her own. Ryan spent four years chasing his national team aspirations in British Columbia and rowed for Canada’s senior team at the Lucerne World Cup in 2017. He no longer rows.

Ryan will be a valuable mentor.

“He always tells me to stay relaxed and to make it as fun as possible,” she said. “He is a great resource and he is always giving me little tips based on what he has gone through, but I think the biggest thing is to try and enjoy it and be with other encouraging and motivating people who will help you along the way.”

She won’t need any help when it comes to being passionate about rowing.

“I love the sport and I love competing,” she said. “It’s very different from other sports that I’ve played and it’s very challenging.

“Sitting on the start line with other rowers and knowing how much work you have put in with each other is pretty special. Rowing isn’t like other sports because of how physically and mentally demanding it is.”

She has received carded money from the federal government since June. She was given D (development) card money only after she graduate from Virginia. NCAA rules don’t allow scholarship athletes to receive outside funding.

“I am going to try and find some work once I get more settled in and I kind of figure out the full-time rowing and see what kind of time it allows for work,” she said. “It’s real hard with scheduling so I am going to wait a bit to see how it all works out.”

She has no plans to resume her schooling right now, but would eventually like to pursue a masters degree in speech pathology.

Her goal is to make the 2020 Canadian Olympic team.

“I am going to shoot for that and if it doesn’t work out, I at least tried it. My first goal is to make the world championships team for next year and qualify a boat for the Olympics.