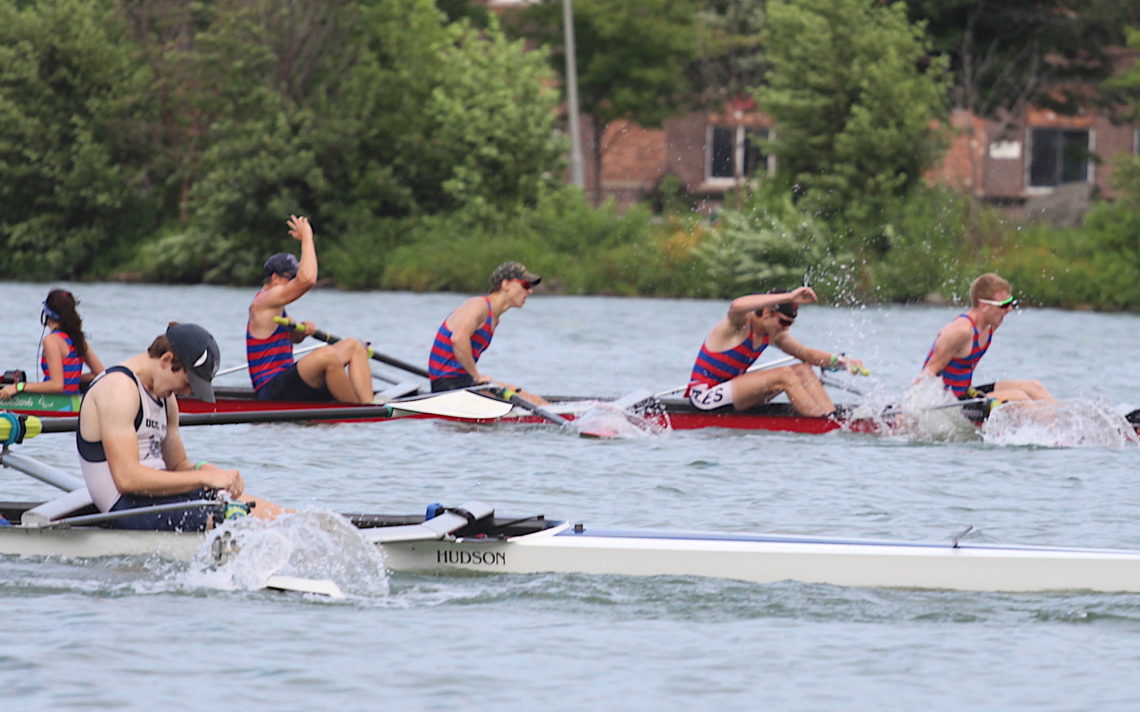 Members of the  St. Catharines Rowing Club’s men’s under-19 coxed four celebrate their victory Thursday in the first day of finals at the Royal Canadian Henley Regatta.

Hailey Mercuri capped an excellent summer Thursday by winning the women’s under-19 single at the Royal Canadian Henley Regatta.

Earlier this year, the 17-year-old Grimsby resident won the single at the Canadian Secondary Schools Rowing Association championships and captured a gold medal in the as part of Team Canada at the CanAmMex regatta.

It was the second career Henley gold for the Grade 12 student at Grimsby and District Secondary School. Last year, she won the double with Graciella Leon, one of her competitors in Thursday’s final.

Her first international foray was a thrill.

“It was the experience of a lifetime,” the St. Catharines Rowing Club member said. “I met some amazing people and I have to thank all the people that supported me; all my friends and my family. I am going to start crying because they really did support me so much and I really appreciated it.”

She described her Henley gold as the highlight of her summer.

“Rowing for Canada was pretty great, but to have everyone here is probably the best thing ever,” she said. “They are the people who got me here and if it wasn’t for my parents driving me and my friends supporting me, I would never had made it here.”

Mercuri reaped the benefits of a full winter training plan designed by coach Michele Fisher. The coming winter will be more of the same as she chases her rowing goals.

“I am going to keep training all year because it’s the thing I love to do,” she said. “I want to keep winning golds and it would be pretty cool to make it to junior worlds.”

“One of my friends, Emma Dockray, is competing tomorrow (Friday) and to make it to her level is definitely a goal. She is an inspiration for me.”

FROM DISAPPOINTMENT TO TRIUMPH

Disappointment early in the summer turned to triumph Thursday for the St. Catharines’ men’s under-19 coxed four, made up of Evan MacRae, Christian McAlpine, Johan May, Andrew Barry and cox Erynn Hutley.

The crew became the first Niagara boat to win on the first day of finals at the Royal Canadian Henley Regatta. It was Barry’s and McAlpine’s fifth career Henley gold, the second for May and MacRae, and the first for Hutley.

“We are a bunch of really good guys and we were all really close to making the junior national team,” May said. “Unfortunately, we all just missed the cut and we came back with a vengeance to do something special.”

The crew knew early on it had a chance to claim Henley gold.

“We all got in the same crew and we knew on the first day of seat racing who was going to be in the top boat,” he said. “We knew with this combination that we would be able to do something tremendous and were going to do some serious damage to the competition.”

The boat has been together for a few weeks and had a great race plan for the final.

“Every race we got better and we executed perfectly today,” May said.

Members of the boat were part of an eight that won an Ontario title and the four also won the Central Ontario Rowing Association regatta in St. Catharines and the St. Catharines Invitational.

“All of these guys are good enough to compete at the international level, but we stayed together and rowed a really good race,” May said. “We owed it too ourselves and we owed it to everyone that kind of believed in us.”

The boat’s margin of victory in the final was its largest of the regatta.

“The heat and the semi we won by not even a second,” May said.

Thursday’s finals saw boats from 14 different clubs emerge as winners in the first 14 races. By the end of the day’s 19 finals, the St. Catharines Rowing Club, Argentina and the Vesper Boat Club from Philadelphia had each won two events.