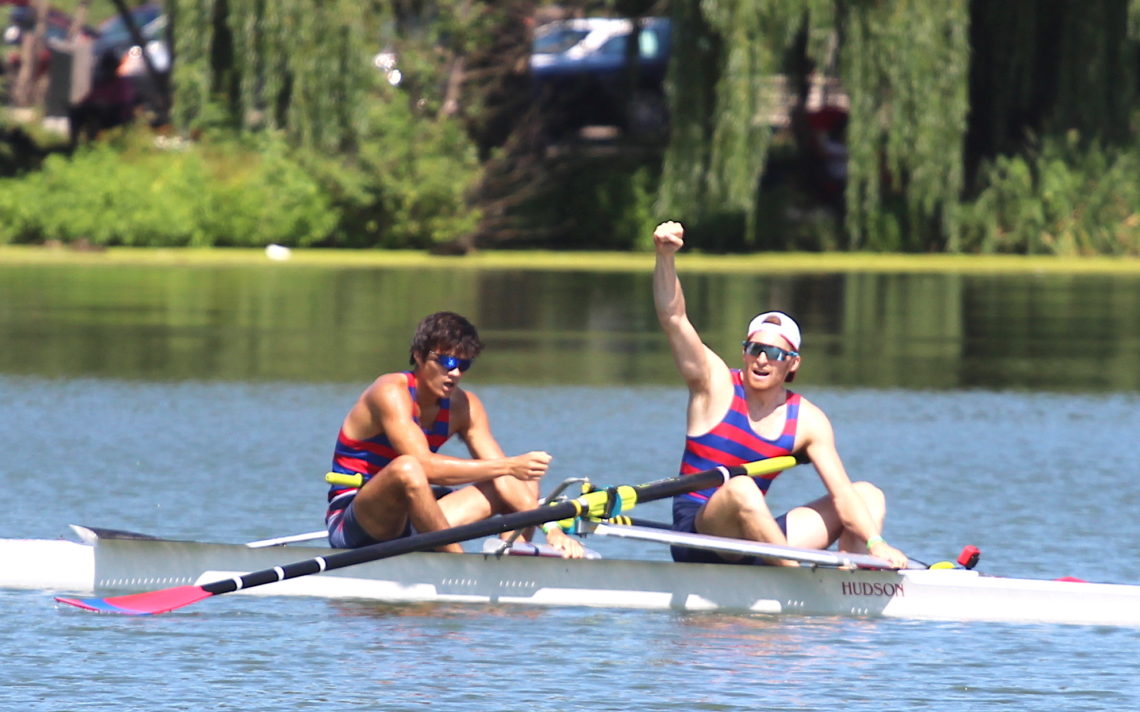 “Eric is a year older than me and I have been racing against him my whole life,” Jacob Giesbrecht said. “I recognized him in the draws all the time, so it was nice to finally compete with the guy here.

“He was always a guy I was amped to compete against.”

Giesbrecht competed against partner Eric Buchanan in the fall and winter. He was a member of the South Niagara Rowing Club and the University of Toronto, while Buchanan rowed for Brock and the St. Catharines Rowing Club. 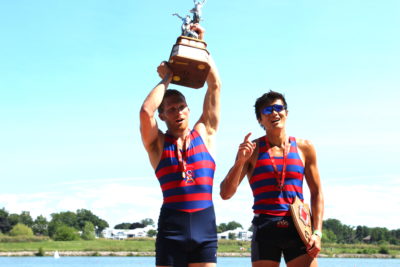 Buchanan, a 24-year-old St. Catharines native, was the St. Catharines Rowing Club’s 2017 senior oarsman of the year after winning Henley gold in the eight and the eight dash. He just graduated from Brock, where he was a two-time Ontario University Athletics champion.

Giesbrecht, who is starting a master’s degree at Brock University this September, admitted it felt unusual to win Henley gold in SCRC colours.

“It feels a little weird, but I am pretty much rowing with all my Brock buddies and guys who I will be rowing with in the fall season,” he said. “It feels like home already.”

Giesbrecht and Buchanan won Saturday despite limited time together. 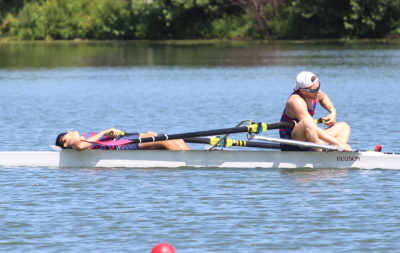 “This is the first regatta that we’ve raced the pair at and it is probably the boat we’ve had the least practise in,” Giesbrecht said. “Most of our practice was in the eight and the four.”

Buchanan said there was no secret to the boat’s success.

“It was putting in the kilometres rowing together,” he said. “We are the old guys so we were always in a boat together. It was easy for us to match up.”

The two came second to Argentina in the men’s senior lightweight four Thursday along with Jacob Martens and Owen Voelkner.

“It was a disappointing call (result), but we were happy to have the competition,” Giesbrecht said.

And more than happy to win their third career Henley golds Saturday.

“You have international competition and the best crews from North America tend to come here and this one is the bigger one in the summer for us,” Giesbrecht said.

For Buchanan, he’s not sure what we will be doing next summer.

“I’m getting a job and I don’t know about rowing,” he said. “I’ll see what I can do with it. I want to keep going, but I will see what life says.”

Less that two hours later, Giesbrecht and Buchanan won their second Henley gold of the day as members of the SCRC’s men’s lightweight eight in the 500-metre dash. Other members of the crew were Dylan Vanderloos, Zach Whiteley, Noah Van Helvert, Cameron Walsh, Martens, Voelkner and cox Raymond Wong.

“I just got out of medical because of a little bit of exhaustion from the previous race,” Buchanan said. “They wanted me to scratch (withdraw), but I had a Freezie so we were good to go.”

The St. Catharines eight went to first from third in the final 150 metres to record the victory.

“I don’t want to give away St. Catharines’ secrets, but the rest of the guys held me down and we just pulled harder,” Buchanan said.

The boat’s speed came through repetition.

“All of these guys are from Brock and we have been in the boat at least since the fall, although, we swapped a few guys out,” Buchanan said.

The strategy for the dash is simple.

Through three days of Henley finals, St. Catharines, Vesper and Argentina have each won five events. Clubs with three triumphs include Winnipeg, University of Victoria, Peterborough, Penn AC and Don.