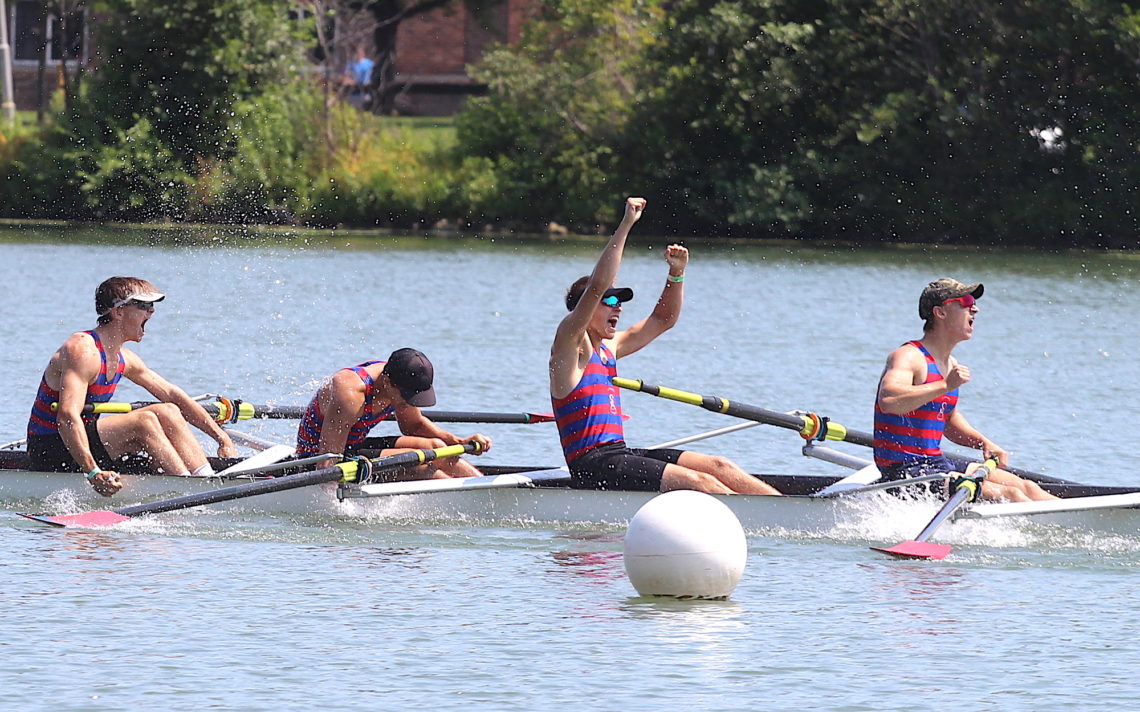 The 17-year-old Grimsby resident won his second Henley gold of 2018 and his sixth overall Sunday as the St. Catharines Rowing Club’s men’s under-18 eight cruised to an impressive victory. On Thursday, the Grimsby and District Secondary School student was part of a St. Catharines crew that won the men’s under-19 coxed four.

Also winning their second Henley gold of the week were Johan May, Evan MacRae and Andrew Barry. Other members of the victorious under-19 eight crew were Jacob Tyrer, Stuart Wing, Michael Bourdeau, Hunter Young and cox Nich Murray-Coplen.

McAlpine won the under-17 four and eight the previous two summers before keeping it rolling in 2018. He never gets tired of winning Henley gold.

“No way,” he said. “Every one gets a little sweeter, especially winning the events this year with all these boys. I couldn’t have done it with anyone else.”

McAlpine was one of several members of the boat that tried out unsuccessfully for the junior national team this summer. He didn’t make it past the first round.

“It wasn’t our best performance and it was a little disappointing right at the start of the summer,” he said. “We finished third (in the pair) and only the top two moved on.”

The early setback motivated McAlpine through July and August.

“The entire summer I was training as hard as I possible could and I never felt more motivated to try and come back from the situation that I was in.”

The St. Catharines eight won the RowOntario finals and went into Henley undefeated before getting beaten by Saratoga in the semifinals.

“We got walked in the race and losing that race was an eye-opener for us,” McAlpine said. “It really pushed us and it made us strive to achieve this win.”

He described the semifinal loss as the best thing that could have happened to the crew.

“It gave us the hunger to do this in the final,” McAlpine said.

Sunday’s medal presentation was extra special for crew member Wing. Both his grandfathers, Art Wing and Tom Rankin, were on hand to present the medals. Wing is a former teacher and rowing coach at St. Catharines Collegiate and Rankin is the CEO of Rankin Construction.

One event was listed in the final schedule for Sunday, but the race wasn’t contested. It was the first year no para events were staged at the regatta since they were introduced to the event.

“It’s very disappointing and process is the key piece here,” Rowing Canada president Carol Purcer said. “Rules are in the rule book and coaches need to read the rules.”

“As part of the process, we have to have the athletes qualified before they come to the regatta,” Purcer said. “That didn’t happen and we weren’t able to make it happen.

“Coaches are very aware now of the process and next year I am sure all the pieces will be in place and we can make it happen.

Also missing from the Henley regatta were Canadian national team members in the championship events.

Team Canada athletes compete in most Henleys, but the timing of international events this summer didn’t allow for their appearance in St. Catharines.

“It’s very important,” Purcer said. “It’s about growing rowing and the excitement that comes from it. They mill around and they chat with athletes and it’s really great, but unfortunately this year we have so many things happening at this time.”