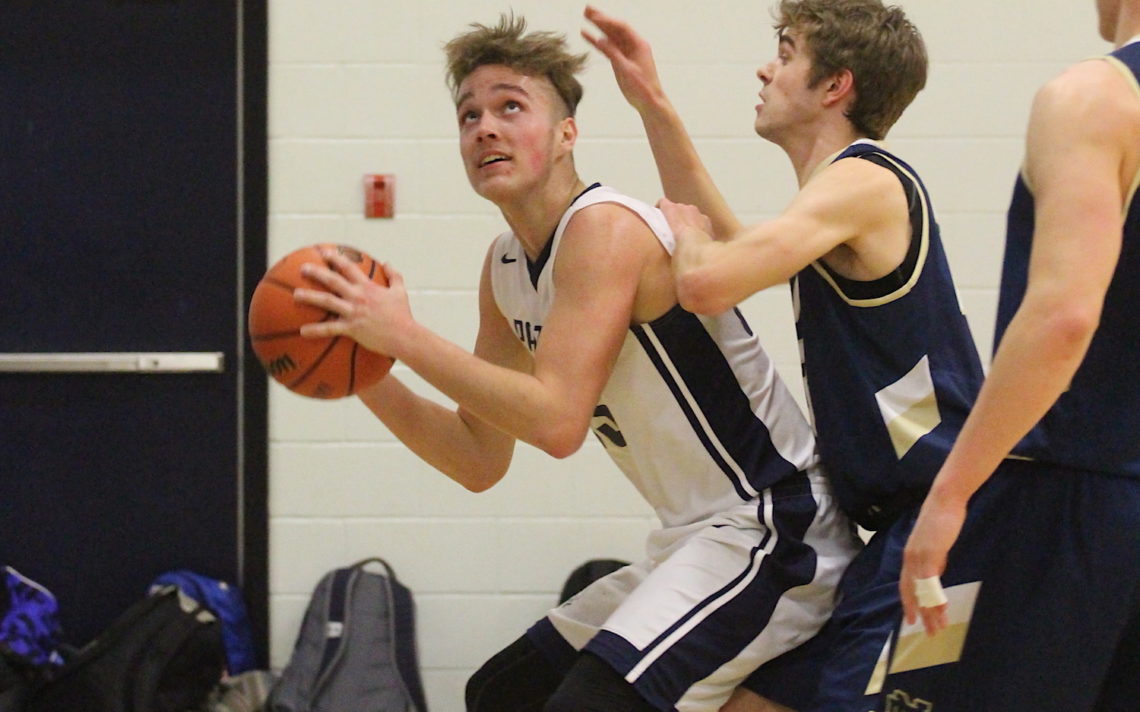 Saint Paul’s Will Schmahl may take the prize as the most unlucky basketball player of the 2017-18 season.

The 6-foot-2 senior basketball player missed two and half weeks after getting elbowed in the face during a league game against St. Francis. In his first game back, the 17-year-old was hit in the face again and needed stitches in his forehead. It was the second time this season the Grade 12 student needed to get stitches after playing basketball. 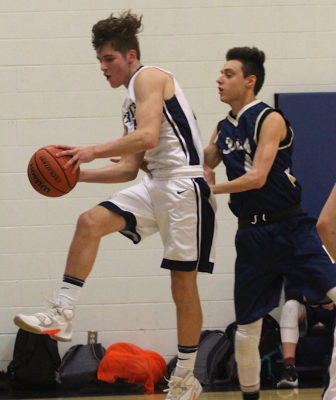 He was beginning to wonder why it always had to be him getting hurt, especially after he suffered the concussion.

“I was definitely out of it and had double vision for a while,” said Schmahl, after scoring 16 points to lead the Patriots to a 60-59 victory over the Notre Dame Fighting Irish Wednesday in the Niagara Catholic Athletic Association semifinals. “It took about two weeks before it started to get better and I could play again.”

“He’s coming around,” he said. “He missed two and half weeks and he’s just now seems to be getting his sea legs.” 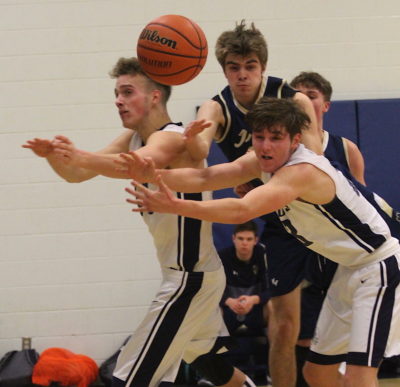 And maybe, just maybe, Schmahl’s luck is beginning to change.

With the Patriots trailing 57-52 with 1:48 left in the game, Schmahl hit a lucky bank-shot, three pointer that cut the lead to two.

“I didn’t call that,” he said, with a smile. “It honestly slipped out of my hand and we caught a break when it went in.”

Capretta felt it was a break his team deserved.

“We missed bunnies (easy shots) and we make a bank so I think it’s the basketball gods rewarding us a bit,” he said.

With the game down to its final seconds, Schmahl’s next three-point shot hit nothing but net to give his team the one-point victory.

“As you can see, he obviously can shoot the ball and he’s really smart,” Capretta said. “He is the quarterback on our football team and he gets the way the game is supposed to be played.”

He certainly did that Wednesday and helped his team overcome an offensive drought.

“We lived on the edge a little bit,” Capretta said. “I thought we had control of the game. We were up five and we couldn’t buy a basket.”

During that drought, the Irish built a 57-50 lead with less than three minutes left in the game, but got outscored 10-2 down the stretch to lose for the second time this season to Saint Paul in NCAA play.

“In the last minute or so, we made a couple of critical mistakes that we shouldn’t make at this time of the year after all the games we have played,” Noter Dame coach Mark Gallagher said. “They took advantage of it and a kid made a shot at the end.

The loss means nothing to Notre Dame in terms of advancing to the overall Zone 3 AAA final, but it’s a game the Irish wanted to win.

“The league is important and from a learning experience, you want to close out that game and win,” Gallagher said. “Sometimes you need the positive results at the end of the game to reinforce the things we are trying to teach.”

Gallagher thinks his squad will play A.N. Myer next Thursday to determine the Zone 3 AAA champion.

Capretta also felt the urge to be victorious Wednesday.

“You have to win this time of year,” he said. “You can’t gather any momentum by losing games and the only way to keep momentum moving forward is to win games.”

“In the big picture, it doesn’t matter, but it does matter in terms of what we are trying to do as a team.”

Significant about the victory was that it was Saint Paul’s 20th overall win of the year.

Schmahl wanted badly to win the game and move on to the NCAA final.

“I think it was one of the most important wins of the season,” he said. “We won the first-ever one last year and I don’t plan on losing this year.”

Saint Paul will move on to be the NCAA representative at the overall Zone 3 AA final.

BPSN Star of the Game: Saint Paul’s Will Schmahl with 16 points, including eight in the last quarter.

Up next: Saint Paul will play in the NCAA final next Tuesday at 3 p.m. at St. Francis.