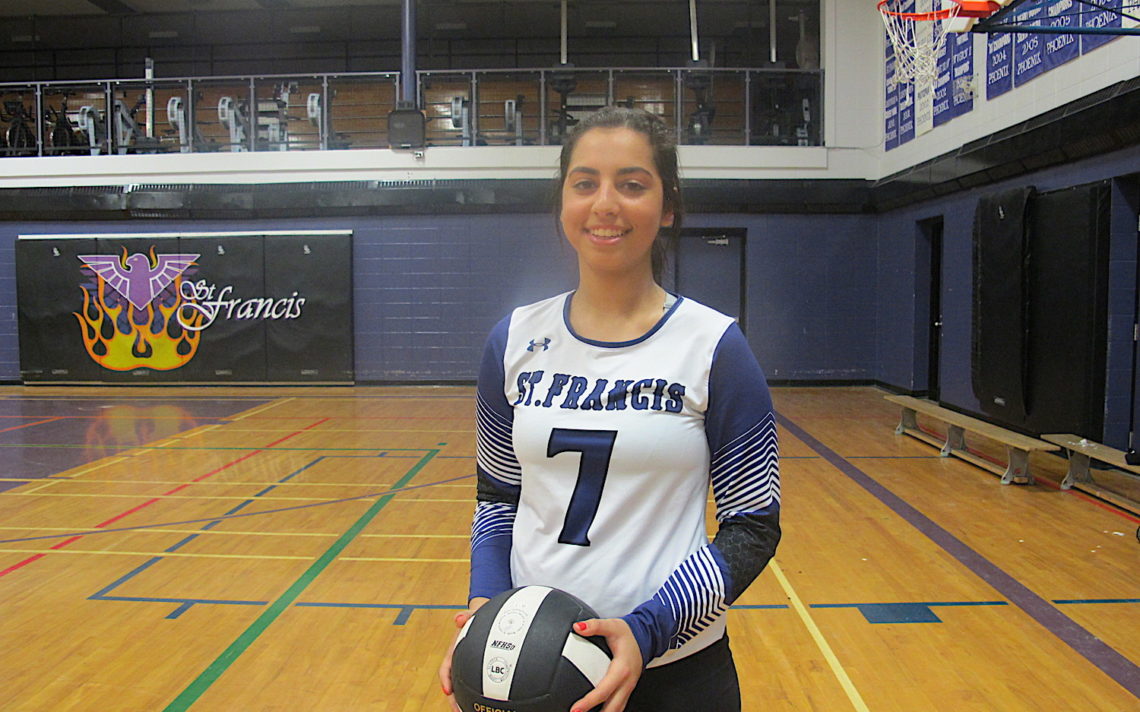 The long and short of it

Carol Maximous is short on stature but long on talent.

The 17-year-old, Grade 11 student stands just 5-foot-3, but is a force to be reckoned with for the St. Francis Phoenix senior girls volleyball team.

Maximous was front and centre with a strong effort Wednesday to lead the Phoenix past the Lakeshore Catholic Gators 25-19, 25-15, 25-19 in a Niagara Catholic Athletic Association semifinal playoff game.

The Phoenix now advance to play Saint Michael in the NCAA finals Tuesday. The winner will take on the Eden Flyers for the right to advance to the Southern Ontario Secondary Schools Association (SOSSA) playdowns.

“Even though she is shorter she doesn’t let that cripple her on the court,” St. Francis coach Tanya Paladino said. “She has a powerful serve, she’s a great hitter, and she’s quick…she is truly an all around player and a pleasure to coach.”

Maximous, who played previously with the Niagara Rapids but gave up travel ball to concentrate on school, admits her height — or lack thereof — can be difficult at times.

“It’s hard. If the ball is really close to the net it’s hard for me to tip it over. Sometimes I have to go in the front row and that’s not easy for me,” she smiled.

“I just always liked the sport. People told me no matter what I should play.”

Maximus has taken on a leadership role in her first season of senior.

“As a Grade 11, this is her first time playing senior volleyball and she has become a valued player and has really made a positive impact on our team,” Paladino said. “After watching her play in the beginning of the season, it was quickly determined that she would be a starter.

“She is the backbone of the team.”

Maximous enjoys being a leader.

The Phoenix jumped out to an early lead, which Maximous said was a key.

“It’s such a good feeling. It puts us in a good place and sets us up,” she said. “When you’re down you don’t have that motivation but when you’re winning, I can’t explain the feeling. It’s so good.

“It’s so frustrating (to fall behind). Our team kind of gets down sometimes when that happens and it’s hard to get people up but you just have to work hard.”

Maximous’ serve was working well — hard and low just over the net — but she downplayed any grand strategy.

“I just hit it as hard as I can, honestly. It’s harder for teams to get it when it’s straight down from the net.”

Paladino was happy for her charges.

“Our team played with such heart. They really wanted it. You could tell. They worked hard out there and deserve to move on.”

Paladino said a birth at SOSSA would be the ultimate.

“It would be great. That’s all the kids have been talking about. They really want to go so it would be great to go and for me too, my first time coaching senior volleyball.”