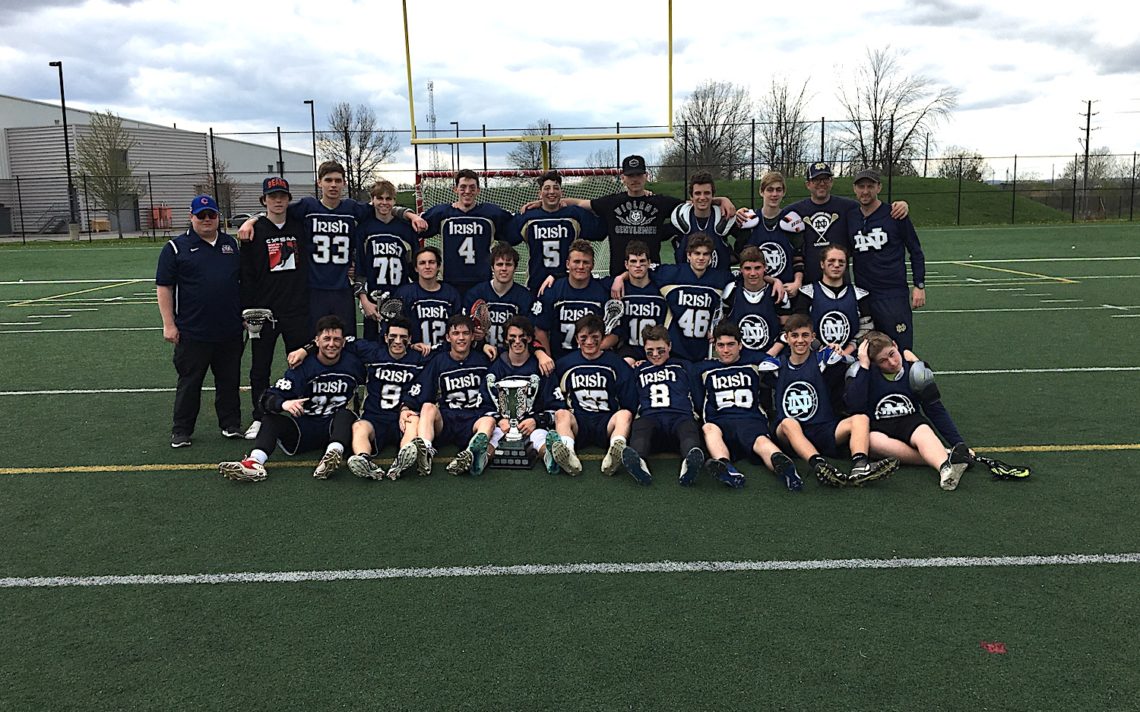 The 18-year-old, Grade 12 student is a steady, stay-at-home defenceman on the ice for the St. Catharines Falcons, but is a go-to player on offence for the Notre Dame Fighting Irish.

Main collected a goal, an assist, and ran the offence to perfection, as the Fighting Irish edged the Denis Morris Reds 8-6 Wednesday to capture the Niagara Athletic Association varsity boys field lacrosse championship at Kiwanis Field.

The Irish, who earlier in the day edged the Lakeshore Catholic Gators 7-5 in the Zone 3 semifinal, advance to the Zone 3 title game versus A.N. Myer next week. The winner of that matchup moves on to the Southern Ontario Secondary Schools Association (SOSSA) playdowns in St. Catharines.

The Reds earn an automatic bye into SOSSA and will play the winner of Myer-Notre Dame.

“It’s awesome to be able to change through the seasons,” Main said. “I don’t get a lot of points in hockey, but I get a lot more in lacrosse so that’s nice.”

“Hockey is momentum and lacrosse is the fastest game on two feet,” he said. “Anything can change in one possession and face offs are everything. Hockey is you have to get your chances and bear down, but in lacrosse anything can happen at any time.”

“When he’s not here, we don’t win a draw and we don’t get possession so it starts with him,” Hominuck said. “He’s such an integral piece. He’s very composed and that’s the big difference from last year to this year. We’re not rushing.

“We played an excellent game. We’ve put a lot of time into it and it showed.”

Hominuck feels the Irish are peaking heading at the most important time of the season.

“It’s awesome. The kids are gelling at the right time and in both games our best players were our best players. We have a lot of weapons on this team and today that really showed as everyone participated.”

Main was thrilled to come out with a victory.

DM coach Matt Vinc, who was formerly a teammate of Hominuck on the St. Catharines Junior A Athletics, said the Reds are in a rebuild this year after losing 12 seniors to graduation, including stars Carter Zavitz and Mason Kamminga.

“A lot of the guys who were here last year played big minutes for us today and throughout the course of the year and are showing the guys the type of tradition we have at Denis Morris,” Vinc said.

Dan Kennedy had two for DM while Ethan Marsh, Carson Eden and Tyler Angle also scored. One goal scorer was unaccounted for.

The Red were without top player Peyton McIntosh, who was ill.

The scoresheet from the DM-Lakeshore game was incomplete.