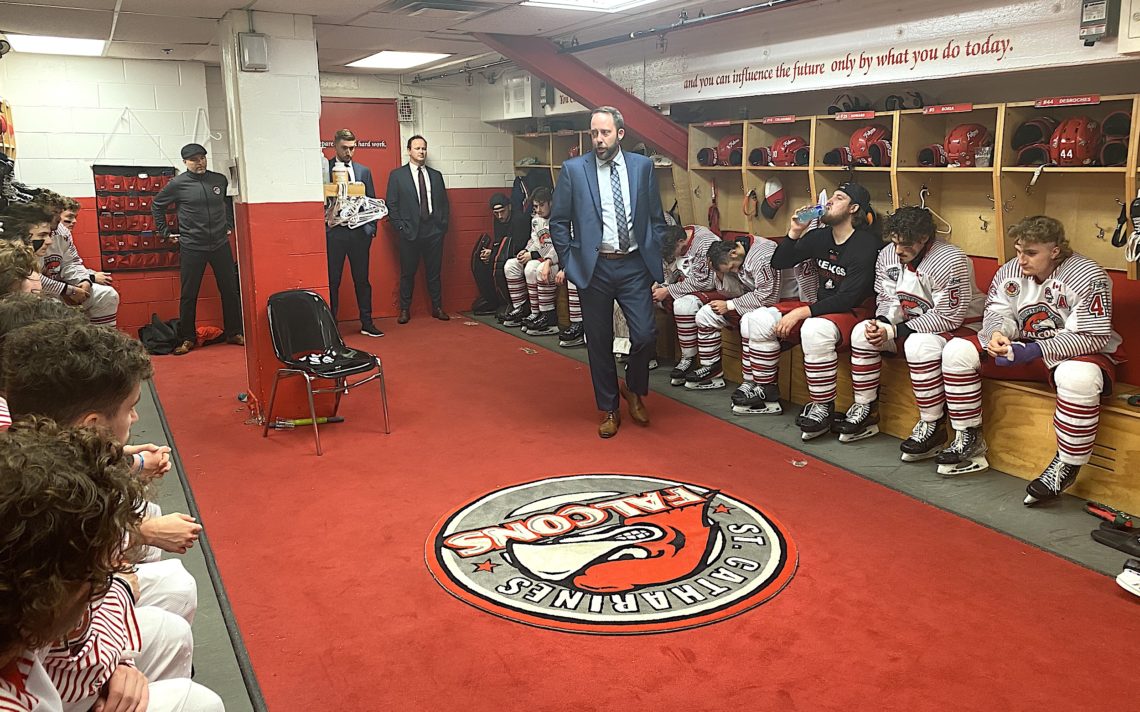 The Jack has gone black.

After 84 years, Jack Gatecliff Arena will soon be gone, a necessary move considering the age and condition of the deteriorating facility.

No more minor hockey games, no more lacrosse, and most of all, no more St. Catharines Falcons games on Friday nights.

Fittingly, the final game played at the facility was last Friday (May 27), a 6-2 Falcons triumph over the Chatham Maroons. The Falcons won their second Sutherland Cup Sunday in Chatham to sweep the best-of-three final 2-0, negating Game 3 in St. Catharines which would have been held tonight.

Instead, the Falcons used the already booked ice time for a final farewell to The Jack, posing for a team picture with the Sutherland Cup.

What a fitting way to close down the old barn.

The arena was built in 1938 and dubbed the Garden City Arena until being renamed Jack Gatecliff Arena following extensive renovations in 1996.

The Falcons are slated to move to the Seymour-Hannah Sports Complex next season while the incumbent Brock Badgers men’s and women’s hockey teams shift to the mint-new Canada Games Park.

It’s a logical and sensible solution, but it’s hard to envision Friday night Falcons hockey ever being quite the same.

The four-pad’s main arena is suitable for junior B hockey but it is cold and the atmosphere is antiseptic. There is nothing special about the building, nothing noteworthy. The Falcons will hopefully bring their championship banners to hang from the rafters and begin a new chapter in their history.

One tangible way to add some history to the four-pad would be to add Jack Gatecliff’s name to the building, press box (if you want to call what they have a press box), dressing rooms. Something.

Jack was an institution in St. Catharines and his name and legacy in local sports must be preserved.

But back to The Jack.

What the building lacked in modern conveniences — the seats are tiny, the walkways too narrow and the ice surface too small— was more than made up for by the memories and history made under that roof.

I have been fortunate enough to cover many, many events in the building, and what better time to reflect on some of the my top memories.

Some of these I have mentioned in a previous column, but under the circumstances, they are worth repeating.

Without a doubt, the Falcons and Port Colborne Sailors playoff game, which began March 10, 1999 and ended the next day, was the most memorable event I ever covered.

The teams played a record eight periods (three regulation and five overtimes periods) before Peter Lacey ended the drama with a goal at 2:13 a.m. The game is believed to be the longest (153:47) in junior B history in Canada. If someone can prove that statement incorrect, I’m more than willing to listen.

Falcons finally win it all

The St. Catharines Falcons have one of the most storied histories of junior B teams in Ontario, but until 2012, were missing one trophy to complete the collection.

After several attempts came up just short, the Falcons finally won their first Sutherland Cup in the spring of 2012 by defeating the Brantford Eagles in six games.

The Eagles, who relocated the next season to Caledonia, won the first two games of the series and it was beginning to look like the Falcons would be bridesmaids once again.

But the Falcons regrouped and ran off four straight wins, including the cup-clincher at home.

Following the game, the emotion, not only the faces of the players, but also on many long-time members of the board of directors and volunteers, was palpable.

In 1997, the Falcons and Elmira Sugar Kings engaged in a memorable seven-game set for the Sutherland Cup.

To this day, the game was the most drama-filled and anticipated encounter I ever covered at Gatecliff Arena.

Remember, this was pre-Ontario Hockey League in Niagara and junior B was the be-all and end-all for local hockey fans.

Fans packed Gatecliff that night, with many literally hanging from the rafters and sitting in the aisles, only to see the Sugar Kings come away with a 5-3 victory over head coach Garry Lariviere’s charges.

After the game, the silence of the dressing room was something I will never forget. To come that close only to fall just short was gut-wrenching.

Long before the Meridian Centre was constructed, the Niagara IceDogs called The Jack home. The IceDogs played their first seven seasons there, including their first game in St. Catharines, Oct. 4, 2007 after moving from Mississauga. Stephan Legein (remember him?) scored three times as the IceDogs topped Mississauga 7-3 before 2,441 fans.

Players loved the atmosphere and fans quickly began to pack The Jack. It was a great place for the IceDogs to start in St. Catharines, but long-term the team needed a bigger, more modern facility.

Still, over seven seasons, the IceDogs managed some great moments and left their own, albeit short, legacy at The Jack.

This one really hits home. The Falcons defeated Welland 8-1 that night, but what made it so memorable was it was my final assignment for the St Catharines Standard after more than three decades with the newspaper and before BPSN was born.

Following the game, Falcons coaches Chris Johnstone and Rick Girhiny brought me into the room and told the team I was moving on. The players showed their respect and captain Justin Felker gave me the game puck. Wow. What a moving moment. I told them at the time I will never forget Friday nights at The Jack and that hopefully I would be back soon writing about them.

It’s a memory I will never forget.

There are many other memories too — the St. Catharines A’s winning a Minto Cup in 2001; the Buffalo Sabres hosting the Ottawa Senators in an exhibition game that saw Garden City native Andrew Peters score a goal and get into a fight for the Sabres; Sabres holding training camp in 2000; the St. Catharines Saints; curling; pro wrestling; even the circus!

And now it’s time to move on.

What’s the old saying? Be glad it happened and not sad it’s over.

That’s a tough thing to do right now.