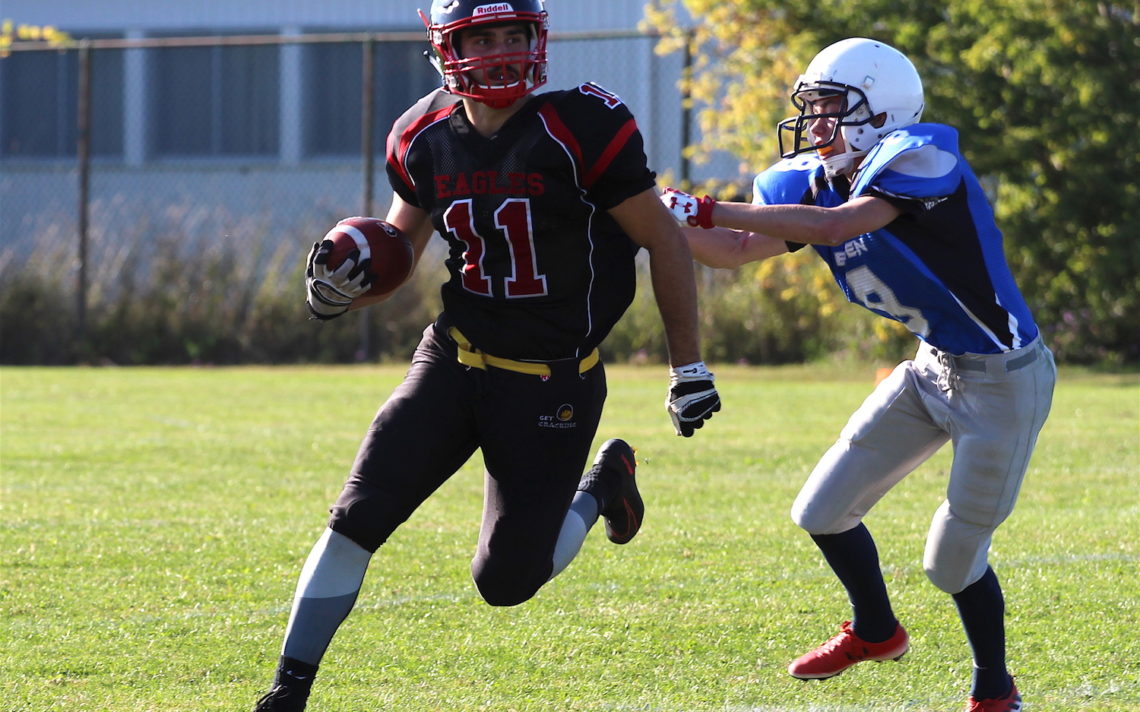 The Eagles have landed

Football is back with a vengeance at Grimsby Secondary School.

With a 31-17 victory Tuesday over Eden, the Grimsby Eagles are 2-0 in Niagara Region High School Athletic Association Tier 2 senior play. It has been a while since Grimsby has had a senior squad and things couldn’t be going any better.

“There is a lot of positive vibes at the school,” head coach Zack Silverthorne said. “They all have the shirts on. Grimsby is back in black and we’re going with the AC/DC theme here. The school is loving it and it’s more than we could have imagined. It’s crazy.”

Silverthorne, who was the head coach of a strong program at South Lincoln before that school closed, isn’t starting from scratch.

He has 12 returning players who played with South Lincoln last year, including two from Grimsby and two from Beamsville.

“It’s good to have 12 returning players but we got killed by graduation,” Silverthorne said.

It’s an understatement to say the team is a work in progress.

“We don’t know if we’re going to score, we can’t tackle but somehow we are finding out that we are fast,” Silverthorne said. “We got speed and some horses and we are getting the ball to our weapons.”

He’s hoping he can return football to be a big part of Grimsby school life.

“The goal is to build the program and stop the bleed to Blessed Trinity of the nines and 10s that are going there for their junior program,” Silverthorne said. “Eventually we will have a junior and senior team because we will be over 900 kids.”

Contributing to the Grimsby win were: Justin Defaria, who scored three TDs on runs of 65, 70 and 11 yards and also booted a 22-yard field goal; and, Cole Abernot with a 30 yard run. Defaria also scored four touchdowns last week in a win over St. Catharines Collegiate.

For Eden, which fell to 1-1 with the loss, Cole Parkin had a 90-yard TD run, Blake Maude completed a 45-yard TD pass to Jonathan Huys and James deBoer booted a field goal.

“Our guys were so tired,” Smith said. “We had lot of two-way (playing both offence and defence) people and they just couldn’t keep up.

“We have a short bench and that came in to play in the second half.”

Smith is delighted to see Grimsby back playing senior football. He played at both South Lincoln and in Grimsby during his high school career.

“I’m super excited to see Grimsby back,” he said. “West Lincoln has always been a hotbed for football.”