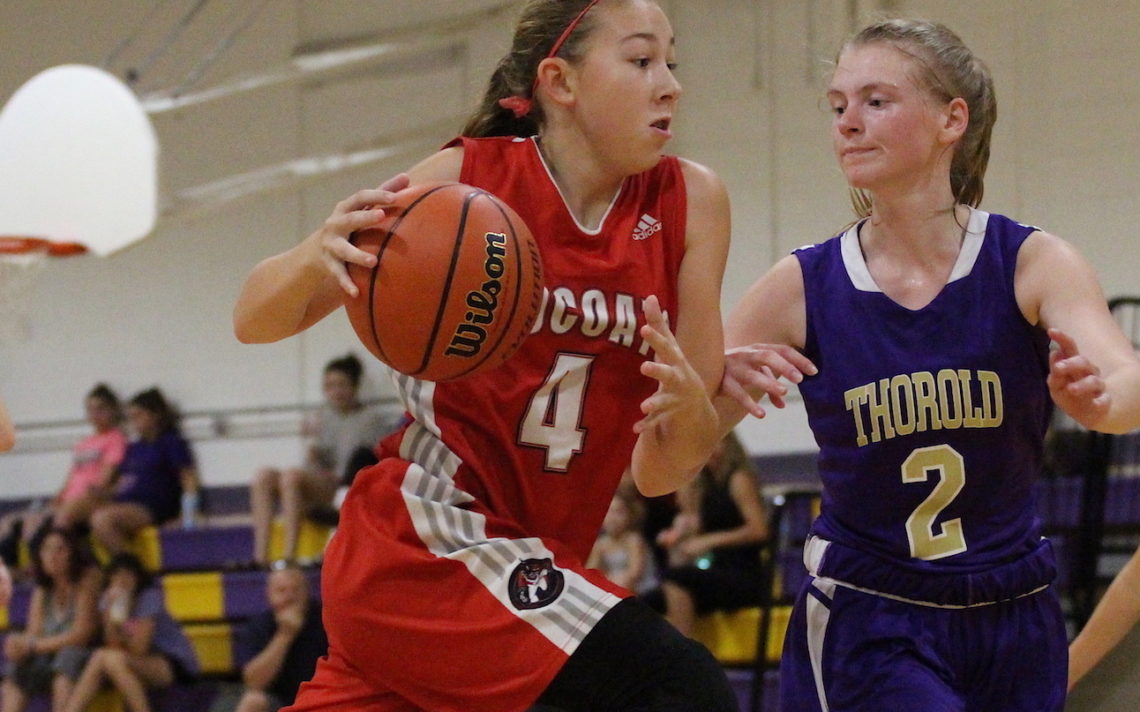 Redcoat learning on the fly

Allison Addy is getting a crash course in senior girls basketball.

The 14-year-old St. Catharines native is one of a number of junior-aged hoopsters playing on the senior team at Governor Simcoe.

“I love it,” the 5-foot-9 player said Tuesday, after netting 14 points to lead her team to a 39-18 victory over the Thorold Golden Eagles in Niagara Region High School Athletic Association play. “It’s much more intense than elementary school.”

The Dalewood grad has plenty of experience playing basketball at a high level. She played travel basketball last season with a strong Pelham Panthers under-14 squad coached by Agi Mete and recently she cracked the roster of the Niagara JUEL Prep team.

She has had to make a number of adjustments to play senior ball.

Once thing Addy isn’t shy to do is shoot the ball.

“If I keep missing my shots, I will start to drive, but if I’m making shots, I keep shooting.”

She has set a number of goals for her first year of high school ball.

“I want to increase my aggressiveness and work on my defence,” she said. “I think we are going to be pretty good.”

“She sees the floor very, very well and she has basketball instincts,” he said. “I always joke around that I wish I had three Addys on the team. She’s a very good player.”

Simcoe has decided to run a varsity (combined junior and senior squad) this season strictly because of numbers.

“We had eight and eight (juniors and seniors) and we didn’t want to do it but we had no choice,” Ingribelli said. “This is more of a rebuilding year for us and we’re teaching the girls basic fundamentals.”

Prior to beating Thorold Tuesay, Simcoe had lost to Eden and defeated Great Lakes in league play.

Like Simcoe, Thorold is running only a varsity program this season.

“We lost a few experienced players and we are in a rebuilding year,” Thorold head coach Marc Dupont said.

Thorold ran a junior program the past four years but didn’t have the numbers to do it again this year.

“We are working hard, the girls practise hard, we’re building on skills and hopefully we will be competing in a few tournaments and most of our games and we’ll see where we are at.”

Dupont feels there are a number of factors that are causing schools like Governor Simcoe and Thorold to run varsity-only programs.

“Clearly there’s less girls playing basketball,” he said. “But also with girls playing club sports and the commitment they have to some of those teams, they just don’t have the time to fit in a second sport like basketball into their schedules.”

Prior to Tuesday’s game, the Golden Eagles had lost league games to Grimsby and Eden.

“I don’t think either game was our best effort,” he said. “We played really good in the first half and in the second half both teams came out aggressive and we let them dictate the rest of the game.”