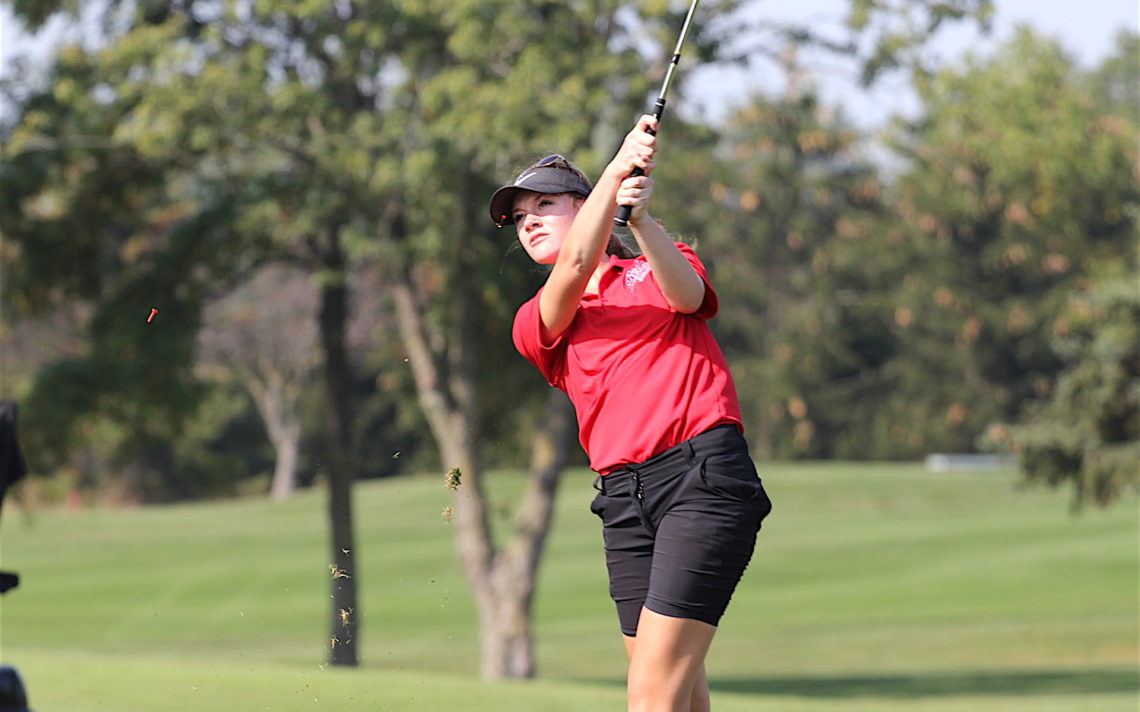 Emily White of Denis Morris carded an 86 Monday at Twenty Valley to win the girls title at the Zone 4 golf championships. Photo by BERNIE PUCHALSKI.

Despite the wickedly warm conditions, Emily White was ice cold to start play Monday at the Zone 4 golf championships at Twenty Valley.

The Grade 12 student at Denis Morris started her round with a double bogey, bogey and triple bogey.

“It was really hot, I wasn’t feeling it and I felt weak,” she said. “I started a little rough but I came back and I was happy with how I played.”

The 17-year-old was able to get things turned around and finished as Zone 4 champion with a 42-44-86 total.

“I knew there wasn’t a lot of good competition and I had a good chance,” she said. “I thought that even if today (Monday) wasn’t that great, I could get some practice in and get ready for next week.”

Emily was able to get through the blistering conditions thank to her mom Donna, who followed Emily’s group with a cart.

“Thank God my mom was there,” she said. “She got me some cold cloths and lots of water and food.”

That her mother was along for the day was no surprise. Everyone in the White family is a golf fanatic including father John, the long-time head pro at Beechwood and a respected golf coach in Niagara.

“It brings our family together and helps us bond,” she said.

This past summer, Emily placed sixth overall on the Niagara Junior Tour and felt she made some good strides in her game.

“I think how far I hit the ball and my short game are both a lot better,” she said. “And my accuracy.”

Older sister Courtney played university golf and Emily, who also does track and field, volleyball and basketball at DM, would like to follow in her footsteps.

“It’s going to take a lot of practice,” she said. “I need to get out to the range more and take lessons.”

Emily and Denis Morris teammate Anna Emond (56-53-109) both qualified for SOSSA next Monday at Twenty Valley.

“I’m hoping to qualify for OFSAA and maybe have a better score than I did today,” White said.

In the boys division, Blessed Trinity recorded the lowest team score in about a decade with a 299 total for four golfers. The last team to crack 300 was a Niagara District squad that went on to win OFSAA.

“We want to get to OFSAA really bad,” said Blessed Trinity’s Cristian Bale. “We missed by four or five shots last year and we are taking it really seriously.”

Bale, a Lookout Point member, did his best to help Blessed Trinity advance to SOSSA with the low score on the day, an even par 35-37-72.

The 17-year-old placed top four in the juvenile division on the Niagara Junior Tour a few years ago but didn’t play this summer.

“I took the summer off to focus on my studies,” the Grade 12 student said. “School is really important to me.”

He did find the time to qualify for a Canadian Junior Golf Association event at Peninsula Lakes.

On Monday, his round could have been even better.

“I struck the ball really well but I didn’t make a lot of putts,” Bale said.