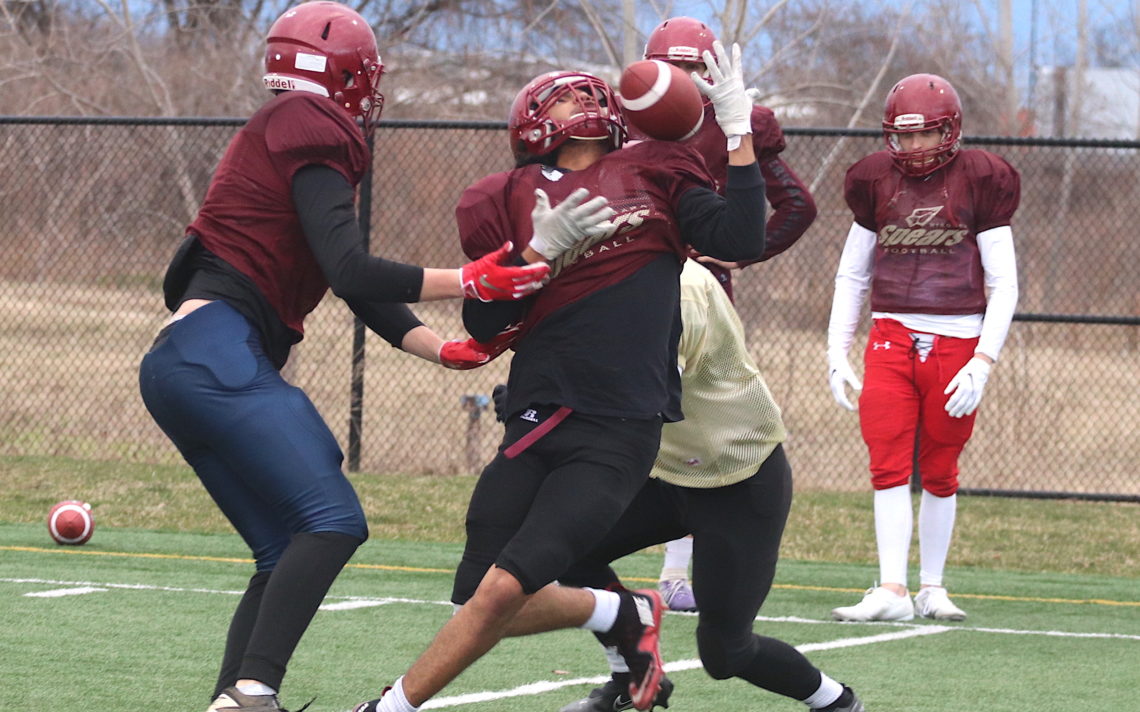 Josh Morley is thrilled with the return of Niagara Spears football.

“It has been three years and it is more than exciting,” the 12B student at Sir Winston Churchill said after practice recently at Kiwanis Field. “I have been waiting for this since Grade 10. We got two weeks of it in Grade 11 and then it got shut down. It was the best two weeks of learning football that I ever had.”

Morley can’t wait to get started.

“I am looking forward to winning. We are going to have a great team and already we have chemistry,” he said. “The guys are great and I have played with a couple of them before.”

There is plenty of internal competition for playing time.

“I have honestly never seen anything like it; the amount of athletes on the team and guys who go 100 per cent every single rep,” he said. “I am confident we are going to have a great team.

“It has been fun. My buddies were playing and I decided to come out,” he said. “I have been playing house league ball for about 10 years.”

Travel ball is a whole new level for Vandenberg.

The competition for spots on the varsity team started at Youngs Sportsplex in Welland in the last week of January when the latest pandemic lockdown ended. There were 70 players trying out for both the varsity and junior varsity teams and 35 at the bantam level.

“A lot more junior varsity players came out but varsity was comparable to other years,” Spears varsity head coach Brian Duguay said. “One nice thing about this year is that we have a player from every high school on the varsity team. It is the first time since 2010.”

The varsity team began outdoor tryouts at Kiwanis Field in April with 62 players still in camp.

“We are looking at what we have to do because we have jerseys for 58.”

One major difference in the league this year is that the team is only allowed to dress 10 12B players (2003 birthdates) and before it was unlimited.

“This year, Ontario Football decided they wanted to get rid of 12Bs and the cities could have CJFL (Canadian Junior Football League) teams,” Duguay said. “We are trying to get a team down here again but I am going to be graduating 2004s and 2003s.”

This year will be the last year 12Bs are able to play in the league.

That one extra year of development can also open opportunities up for players to play at the next level.

“I’ve known a lot of guys that took that 12B year and they progressed.”

With the Spears set to open their season May 21 at home, Duguay likes his squad.

“We have a great core of players,” he said.

There are intense battles for playing time on both sides of the ball.

“It is really nice. There are no guarantees anywhere.”

The Spears are now playing in the Ontario Summer Football League’s AAA South Division along with London, Essex, Hamilton, Cambridge and Brantford.

“It is the first time in a long time that all the leagues in Ontario are in the same league,” Duguay said. “We will still be playing the teams that we played before and our loop is still going to be hard.”

The decision was announced last year by Football Ontario and the Football Ontario Alignment Task Force and the move was made to “provide a streamlined process for delivery and participation.”

The other two divisions in the league are The GTA (Burlington, Etobicoke, Pickering, Scarborough, Oshawa and Brampton) and The North (Huronia, Myers, Cumberland, Kingston, Sault Ste. Marie and Peterborough).