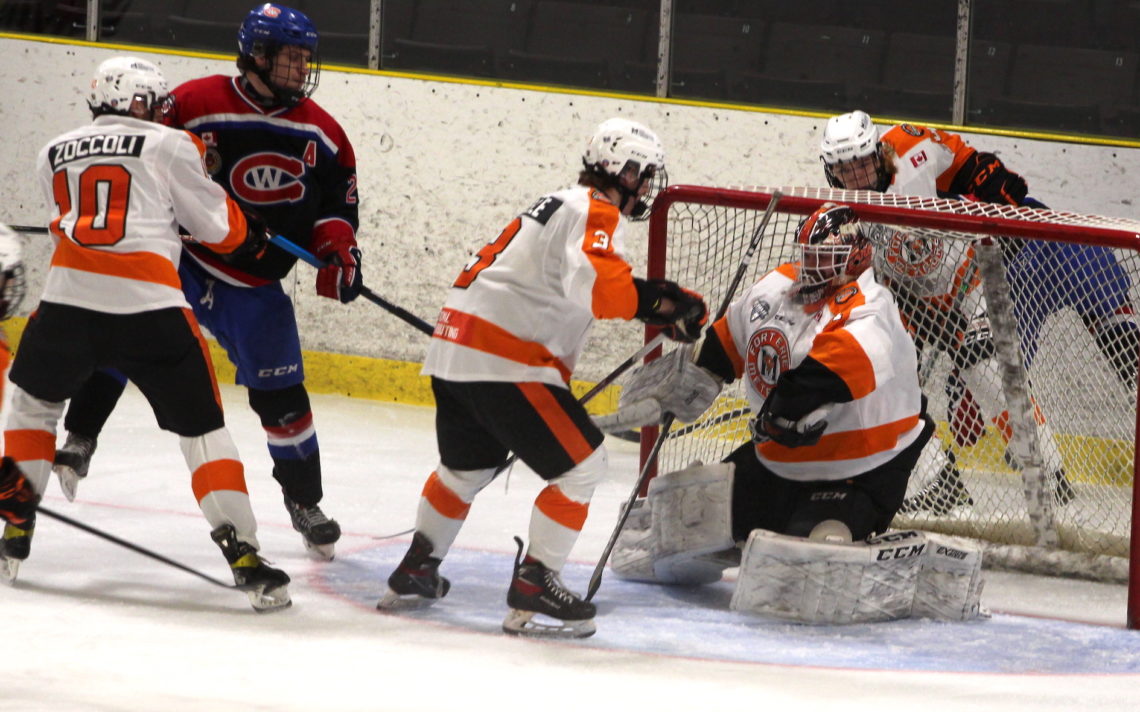 The Mets topped the Welland Junior Canadians 4-1 Saturday night in Fort Erie, then completed the four-game sweep of their best-of-seven quarter-final series with a 2-1 victory in Welland Sunday night.

“A great night for the organization,” Meteors coach Nik Passero said. “I’m proud to be able to lead these guys and our staff.

“It was a pleasure to stand behind them and watch them go to work.”

Tanner Ryan gave Welland a 1-0 lead in the first period before Brendan Krawczyk and Joshua DiFrancesco replied for Fort Erie less than a minute apart in the second period.

Duncan Nichols-Delay kicked out 17 shots for the win.

Nico Balice made 28 saves for Welland.

Saturday at the Leisureplex, the Meteors got two goals from Krawczyk and singles from Joseph Macchione and Marcus Regina.

Nichols-Delay made 30 saves for the win.

“We had huge series from a lot of guys,” Passero said. “Doug Doren is the best defensive centre in the league and he proved it four straight games in a row. Our 20-year-olds all played their best hockey of the year — Nichols-Delay, (Michael) Angrilli and Krawczyk were all-world.”

Balice made 25 saves in a losing effort.

The St. Catharines Falcons are one win from advancing to the semifinals following a 7-0 triumph over the Pelham Panthers Sunday afternoon in Pelham.

“Was nice to see some of our young guys get rewarded for their hard work today,” Falcons head coach Tyler Bielby said.

The Falcons rested a handful of players who were banged up.

“With it being our third game in four days, we felt we did a good job of letting the puck do the work,” Bielby added. “Was a good team win with a lot of different players contributing.”

Andrew MacLean made 18 saves for the shutout.

The Falcons can finish off the sweep Tuesday at home at 7 p.m. Game 5, if necessary, is Friday, also in St. Catharines.

“The job is not done though,” Bielby said. “Need to put it behind us and turn our focus to Tuesday. Hardest game to win is always the fourth. We will be ready and are looking forward to the opportunity to close out the series on home ice.”

The Hamilton Kilty B’s took a commanding 3-0 lead in their series with the Niagara Falls Canucks with a 3-2 overtime win at home Sunday night.

Adam Clark netted the winner just 1:08 into the extra period.

Matthew Duarte and Connor Haynes also scored for the winners.

Matthew Riva and Gehrig Lindberg replied for the Canucks.

Game 4 is Tuesday in Niagara Falls.

The Caledonia Corvairs can complete the sweep with a win Monday in Port Colborne after a 7-3 win at home Saturday to take a 3-0 lead in their quarter-final series.

Ethan Doyle continues to be unstoppable with three goals and two assists to give him 11 points in the first three games of the series.

Ethan Langevin made 45 saves in goal for the Corvairs.

Game 5, if necessary, would be Tuesday in Caledonia.