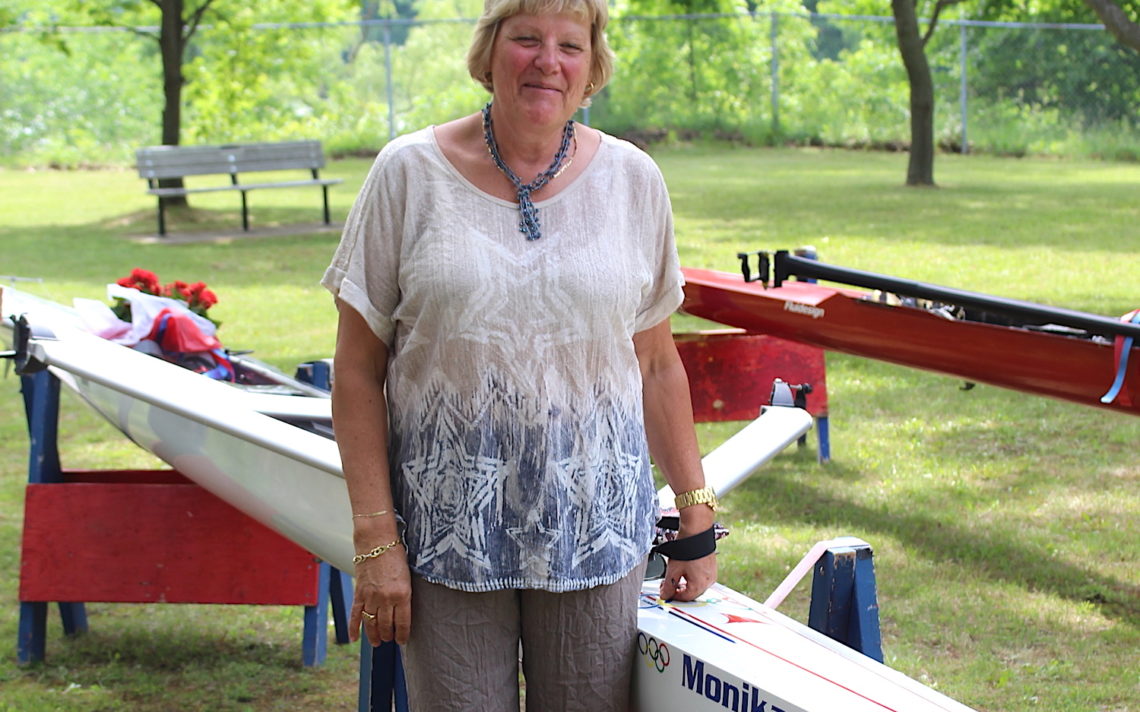 One of the trailblazers for women’s rowing in Canada was honoured June 10 at the St. Catharines Rowing Club’s boat and equipment christening ceremonies.

Monika Draeger-Seymour had the bow of an Olympic Series double/pair christened in her honour. With partner Becky Stevenson (Ostrom) from London, the Niagara Falls native made up the first Canadian women to compete in the world rowing championships. The twosome competed in a pair at the 1974 world championships in Lucerne, Switzerland.

Their coach, Kris Korzeniowski, wasn’t able to go to the world championships because he had defected from Poland, so he wrote the pair’s entire training program down for them and sent them on their way.

Sent to Munich, Germany, for a training camp before the world championships, St. Catharines coaches who were at the training camp, including Neil Campbell, Stan Murdza and Alex Wilson, took turns coaching the pair.

When they went to Lucerne for the world championships, they travelled with the referees, who helped them put their boat together before moving on to their own duties.

“There was supposed to be someone watching out for us, but we were on our own,” she said.

British coach Penny Chuter was there with a couple of British women and she helped the Canadians out with their boat if it needed any rigging changes.

“Becky and I went out there for our first race and the Bulgarians were on one side and the Russians were on the other and we had never seen anything like it,” she said. “We beat the Americans and we weren’t last. It got us really excited about the future.”

Part of the reason that were sent to the worlds in 1974 was to get a women’s team ready to compete in the 1976 Montreal Olympics.

At the Olympics, Draeger-Seymour competed in a coxed four and the event produced a memory that she repressed for many years.

“We probably could have won a silver medal, but we caught a huge crab in the semifinal and didn’t make the final,” she said. “Then it went down the dumper.

“I don’t remember that there was any pressure on us that we were going to do anything and it was only years after when some of us got together and saw a picture of what it looked like; this boat-stopping crab. There is a water spout that is probably 20 feet in the air and we were devastated.”

The boat ended up winning the petite (B) final, 10 minutes before the final. Its time in the B final would have won it the silver medal.

“They don’t compare in rowing and it is what it is, but years after (the 1990s) when we looked at it and thought about it, we thought that our lives could have been really different,” she said. “We were disappointed coming home from the Olympics and then we got on with our lives.”

She was ready to try her luck again at the 1980 Olympics in Moscow, but her hopes were dashed by an American-led boycott of the event.

“We had all gone out to Vancouver in January, trained there until May and it happened less than a week before we were supposed to be leaving for Europe to have a pre-Olympics training camp,” she said. “We sort of knew what was going on but thank you Jimmy Carter for mixing politics with sport.”

The 1992 inductee into the Niagara Falls Sports Wall of Fame started rowing in 1972 at the University of Western Ontario and would head home in the summer to train with the St. Catharine Rowing Club. Among her many career highlights was a bronze medal in the eight at the 1978 world championships.

She retired from rowing in 198o and started a long coaching career that included stints at the St. Catharines Rowing Club, Laura Secord, the Ridley Graduate Boat Club and Ontario crews at the Canada Cup. The current president of the Ridley Graduate Boat Club is also a faithful volunteer at the many provincial, national and international rowing regattas in St. Catharines. The Level 3 certified coach also rows recreationally

“Thank you for this honour and I can’t wait to see the boat go by me on the course,” she said. “It is really exciting and it is not something that I really expected.”

Like all the others at the christen ceremony, Draeger-Seymour poured water on the boat at the event.

“May you always row on calm water and come back to the shore safely but, in between, cross the line first,” she said, as she poured.