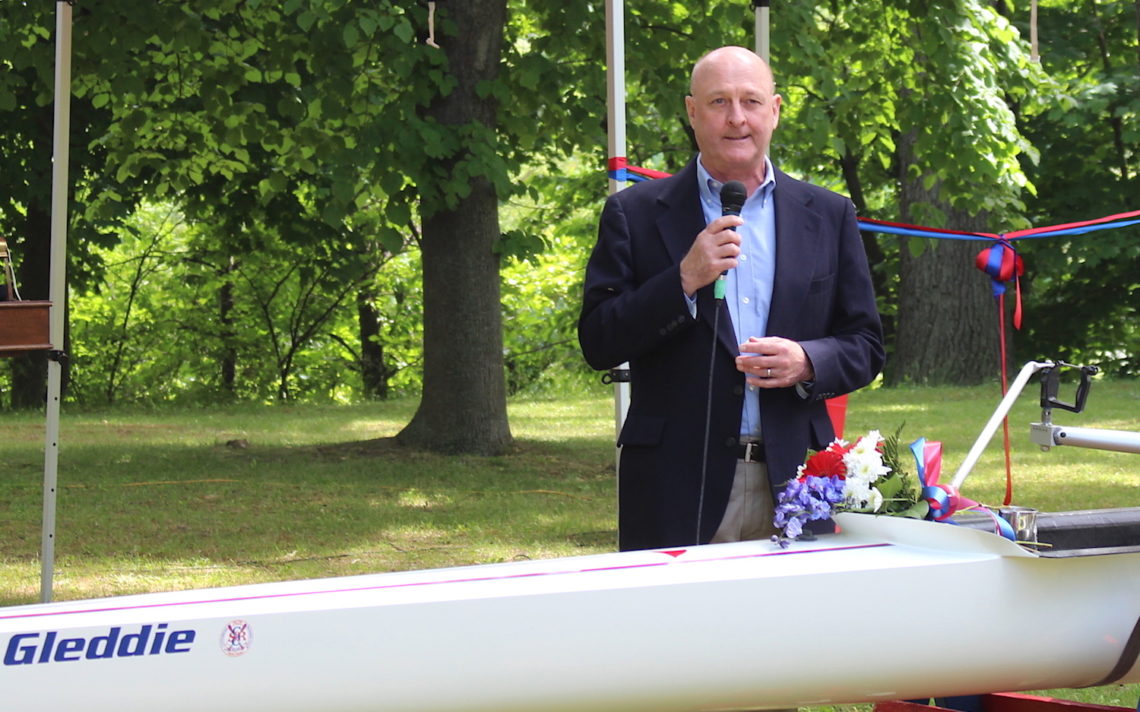 On the day a straight four/quad was christened in his honour by the St. Catharines Rowing Club, John Gleddie reminisced about a conversation he had with a coach during his early days learning the sport at the Argonaut Rowing Club in Toronto.

“He took me aside one day and told me ‘You will meet the nicest people and make your best friends for life.’ No truer words were spoken,” the chiropractor said. 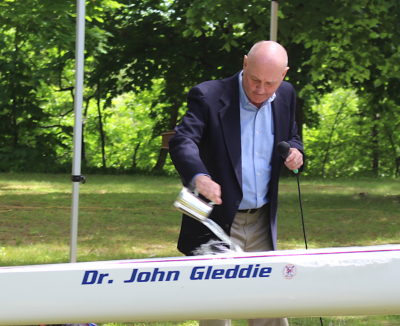 Gleddie deflected all the kinds words directed at him at last Sunday’s christening ceremony to the rowers he has coached.

“I want to thank the athletes,” he said. “There has been a number I have coached over the years and you are the ones that have put in the effort and you made me look good.”

The athletes were also acknowledged as he ceremoniously poured water on the boat to christen it.

“To the athletes who will row this, all the successes and good fortune to them all,” he said.

Gleddie was humbled by the honour.

“When Michelle (SCRC president Kerr) sent me the email saying that they were going to name a boat after me, I said there had to be more people worthy than me,” he said. “But you know what, thanks.

“There used to be an old tradition that they named a boat after you after you died, but I am glad they don’t do that now.”

In 1980, he was named an assistant coach with the women’s Olympic team, but didn’t end of going because of the American-led boycott of the Moscow Games.

Gleddie arrived in St. Catharines in the early 1980s and from 1981 to 1985 was the rowing coordinator at Brock University and the coach of many successful crews.

He had a hiatus from rowing from 1985 and 2015 — he spent that time in the employ of the Texas Rangers and NASCAR teams — before returning to coaching in 2015 with the St. Catharines Rowing Club’s heavyweight men’s program.

“Another thing about John is that he is very modest about the contributions he makes to rowing in a number of ways,” said Brock rowing coach Peter Somerwil, who introduced Gleddie at the christening ceremony.

‘I am not going to go into details about what these anonymous donations are about, but it’s safe to say John has made a number of donations and supported a number of rowing organizations in this area to either help the organization as a whole or to help individual athletes so that they could row for the summer.”

In the lead up to the 1996 Olympics, Gleddie spearheaded a campaign by the Ontario Chiropractic Association to raise $25,000 to help rower Derek Porter win gold at the Olympics. Porter was in chiropractic college at the time.

“I didn’t put all of that in,” Gleddie, said with a laugh.

“Even to this day, he supports a lot of rowers,” he said. “They call him at the last minute because they won’t do what the coaches say and do some stretching and warmups. When they run into trouble, John is quick to get them into his office and treat them. I’m guessing that not all of them are paying.”

Gleddie was delighted with the boat named in his honour.

“This is an awesome looking boat,” Gleddie said. “It’s rigged as a four right now, but it’s a four/quad and we had the good fortune of rowing it before we actually purchased it.”

The boat was purchased with the help of Gleddie’s heavyweight athletes.

“This boat should really be called the $5 boat because through the efforts of the senior heavyweight men and Mark (Welsh), we gave people the honour to park their car on Mother’s Day for $5,” he said. “All you have to do is make a donation to rowing. You can imagine driving up in your car and having some gorilla say ‘Hey, give me $5 to park your car.’ Thank you to the heavyweight men because your efforts have paid for a lot of this boat.”