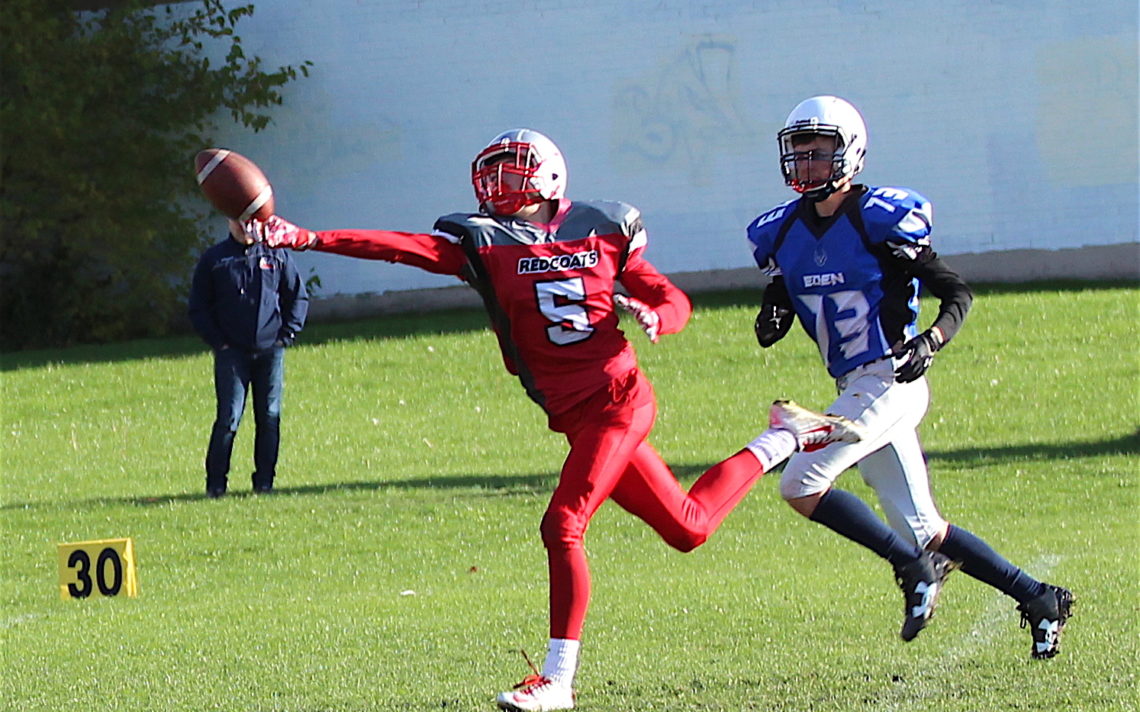 Reluctant back stars for Flyers

On every football team, there a player or two that wants the ball in their hands on every possession.

Then there’s Eden’s Evan Langendoen who wanted no part of taking over at running back when starter Cole Parkin broke his foot in the fourth game of the season.

“We had to pick and choose to see who could do it and Evan really didn’t want to do it,” Eden head coach Jordan Smith said. “But he embraced it and now he’s a star.”

Langendoen was certainly the star of Friday’s 21-6 victory over the visiting Governor Simcoe Redcoats in the Niagara Region High School Athletic Association Tier 2 semifinals. He rushed for more than 150 yards and a pair of majors.

The 16-year-old vividly recalled when he was asked to take over at running back.

“I was very skeptical because I had never played running back before and this was my first time playing football,” the six foot, 160-pounder said. “I was not a big fan of playing running back because I have seen other guys get injured playing it.

“I took it for the team and decided I would do it.”

The Grade 11 student quickly got over his fear of injury and began playing well.

“I just sucked it up and whatever happens happens,” he said. “I’ll just power through it.”

He is now a a fan of the position and hopes to stay in that role next season.

“I really like it,” he said. “I thought I would get hurt a lot more than I have, but I absolutely love it because I get the ball a lot more.”

In his former role as a slotback, he had caught a couple of passes in three games.

Improved vision and making cuts were the biggest adjustments he had to make.

“I had never done it before so I had to teach myself, trust my teammates, know where to go and have faster thoughts with the ball,” he said.

“It’s really exciting and I was really happy with the way the league was set up this year,” Smith said. “All the games have been competitive and it has been a lot of fun to be a part of for the coaches and the players.”

“It has taken a lot of hard work and the junior team has taken some lumps because the kids don’t come out yet.” he said. “I am hoping our success will breed more success and I am hoping that maybe we will eventually be competitive in Tier 1.

Governor Simcoe trailled 14-6 at half, which included getting stopped on three attempts to score near the goal line. Unfortunately, quarterback Andrew Scott was injured near the end of the first half and the Redcoats turned the ball over on downs five times in the second half.

“The kids played tough,” Simcoe head coach Jamie Brophy said. “They had a first and goal we didn’t score on and once our quarterback went out at the half, it’s tough when you have a real valuable player on your team get injured.”

When a couple other Grade 12 players also got hurt, it was too much for the Redcoats to overcome.

“We’re just not deep enough but we have a lot of talented young kids which bodes well for the future,” Brophy said. “We couldn’t execute when we needed to.”

Brophy is excited about his team’s prospects for next season.

“We have some talented Grade 9s and 10s which will really help us,” he said.

BPSN Star of the Game: Eden running back Evan Langendoen with 150 yards rushing, including TD runs of seven and 50 yards.

Up next: Eden advances to the championship Nov. 10 at Grimsby.