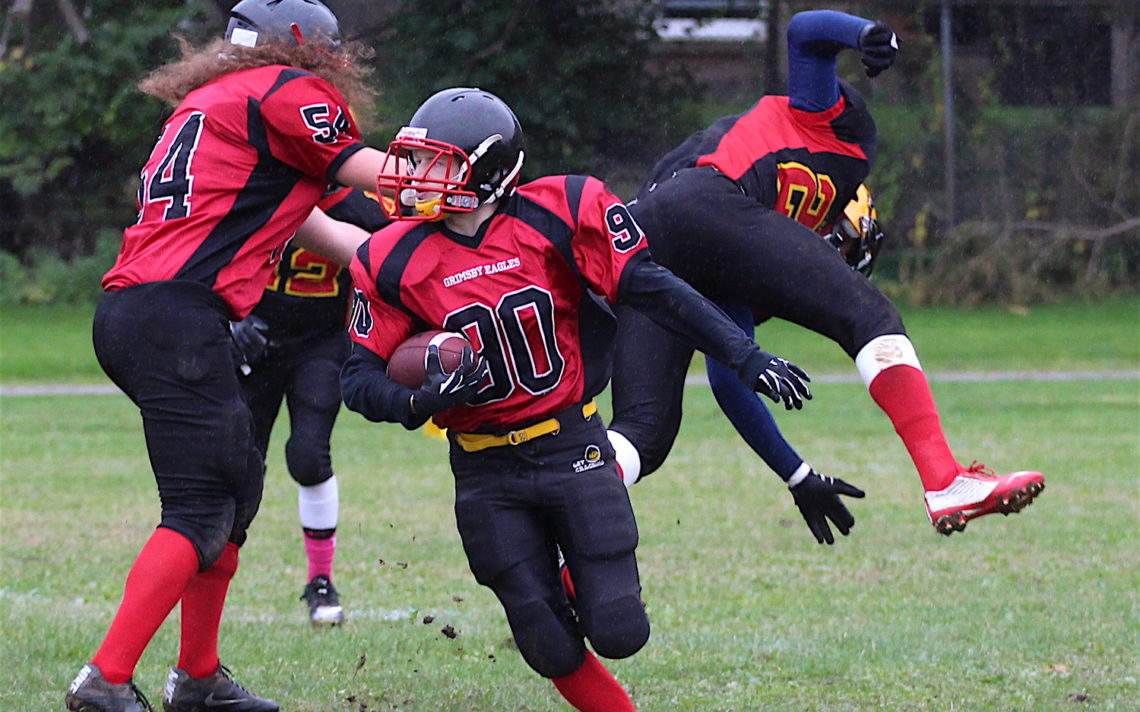 Saints give Eagles a tussle

Thursday’s semifinal football game between the Grimsby Eagles (5-1) and the visiting St. Catharines Collegiate Saints (1-5) wasn’t like anything one would expect from teams with opposite records.

That it took a late interception and an even later score for Grimsby to emerge with a 34-22 triumph in the Niagara Region High School Athletic Association Tier 2 matchup certainly didn’t surprise Grimsby coach Zack Silverthorne.

“We didn’t like the matchup or their home run ability,” he said. “They have two guys, 7 (Jon Emmorey) and 27 (Chris Ceide), who are fast, fast, fast and they break tackles.

“We hated the matchup.”

Silverthorne felt his team was lucky to escape with the victory.

“They had two touchdowns called back on holds and we got a touchdown on a tipped ball so we’re counting our blessings,” he said. “Defensively, I don’t know what happened, but we have to play better than that.

“We were a deer in the headlights everywhere.”

Thankfully, the Eagles had Justin DeFaria to bail them out. The 17-year-old came into the game with 12 touchdowns and added four more, two on the ground and two in the air. He also booted a pair of field goals and had the aforementioned late interception with 1:17 left in the game and Grimsby clinging to a 27-22 lead.

“The league knows about him,” Silverthorne said. “We have to find a way to get other guys touches.”

Emmorey credited his entire team for almost creating an upset.

“Everyone just has such good spirit and we tried our best,” the 17-year-old said. “Even if we are down a bunch of touchdowns, we strive to do our best.”

The Grade 12 student, who plans to return for 12B, likes everything about football; the only sport he plays.

“I love the aggressiveness and running a lot too,” he said.

The 5-foot-10, 165-pound quarterback has a simple recipe for his team to be even better next season.

“If people don’t show up to practice, we need to motivate them to show up,” he said.

Saints offensive coordinator Dan Pepe was disappointed with the loss, but happy with his team’s progress.

“I just think of where we were last year,” he said. “I believe we only scored 12 points all year and to think we got to that point halfway through our first game means we are building the program and the players are buying into what we do.”

Pepe is hoping to have Ceide and Emmorey back for one more year of high school football.

“We have some tricks up our sleeve and some ideas for those two,” he said.

Giving the ball to Ceide as much as possible should be one of Pepe’s tricks.

“Who would want to tackle Chris?” Pepe said. “He is going to make you play a full game to win and you’re not going to get away free with Chris on the field.”

“We didn’t play well today,” Notre Dame head coach Tim Bisci said. “We need to be more focused on the tasks at hand.

“I don’t think we will be looking beyond our next opponent.”

Corey Vazquez tossed a 20-yard TD pass to Tye Mezei and a 50-yard scoring strike to Ryan Labelle to account for Lakeshore’s scoring. Eli Lovegrove and Wes Dykstra had interceptions for the Gators.

BPSN Star of the Game: Grimsby’s Justin DeFaria who did a long list of things (see below).

Up next: Grimsby will host the NRHSAA Tier 2 football final next Thursday against the winner of Friday’s semifinal between Eden and Governor Simcoe.