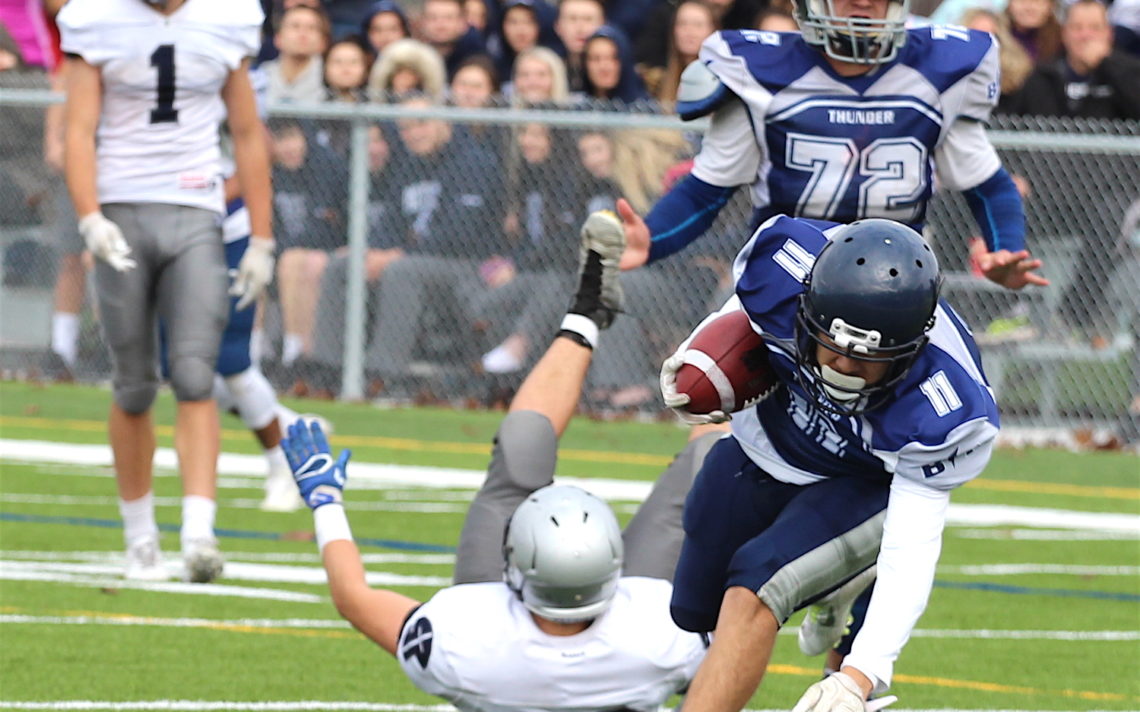 Each time the Blessed Trinity Thunder and Saint Paul Patriots met in high school senior football this season, there was a dramatic ending.

When the two Niagara Catholic Athletic Association squads battled in the regular season, Saint Paul won 10-7 when the Patriots drove the ball 70 yards in the final 49 seconds of the game and booted a game-winning field goal.

On Friday in the NCAA semifinals with a berth in the final against Notre Dame on the line, the shoe was on the other foot.

Riding a five-game winning streak, the Patriots erased a 10-0 fourth-quarter deficit to take a 13-10 lead with 1:17 left in the game. Taking over on their own 35-yard line, Thunder quarterback Xavier Hamidu connected with Auston Kennedy for a 19-yard completion and followed that up with a 45-yard pass reception to Luke Lemessurier that gave the Thunder the ball on the Patriots 16-yard line with 30 seconds left in the game. After a pass interference called saw the Thunder with the ball on the one-yard line, Kennedy punched it in from the one-yard line as time expired to give Blessed Trinity a 16-13 triumph.

“I don’t even know what to say at this point,” Thunder head coach Mark Antonelli said. “The last two minutes of both those games were just a blur.”

Antonelli contemplated booted a game-tying field goal with three seconds left in the game but decided to go for all the marbles.

“It was win it and get out of Dodge and Luke Lemessurier had one of the biggest plays of his life to set that up,” he said. “For all the 12Bs it could have been their last game, but you live by the sword and die by the sword.”

After their passing game struggled for a good portion of the season, the Thunder went to work.

“We knew we had to change something defensively and offensively,” Antonelli said. “No disrespect to our previous opponent, but for two weeks we had a game plan for Saint Paul.

“We have been repping our passing game for two weeks.”

Antonelli praised Hamidu for his play.

“God bless him,” he said. “He came out today and did everything we asked of him. He stepped up, he stayed composed and listened, and he did all the right things that a true leader would do.

“If it wasn’t for his arm, we wouldn’t have won today.”

He had a simple explanation for his success through the air Friday.

“I guess I just wanted it more today,” he said. “I want to win a championship again with the team we had back in Grade 10.”

The two-weeks of preparation for the semifinal was nothing complicated.

“It was basic fundamentals, just getting more crisp with them and getting better every day,” he said.

Hamidu was confident he could lead his team to a late-second victory.

“I thought I had a shot and we knew we had a shot,” he said. “If we believed enough, we could score and win the game.”

There will be no magic formula to beat unbeaten Notre Dame in the final next week.

“We have to believe again and come together as a team.” he said. “And we can’t get down on each other.”

Saint Paul was disappointed with the loss, but recognized it was a hard-fought game.

“Any team could have won and they are a great football team.”

Oreskovich was surprised how well Hamidu threw the ball in the semifinal compared to when the two teams met in the regular season.

“Their throwing game really improved and we didn’t expect them to do that,” he said. “We expected more of a run game but they did the right things.”

BPSN Star of the Game: BT quarterback Xavier Hamidu who spearheaded a 75-yard, game-winning touchdown drive in the final 1:17 of the game.

Up next: Blessed Trinity advances to the championship Nov. 9 at 1:15 p.m. at Notre Dame.