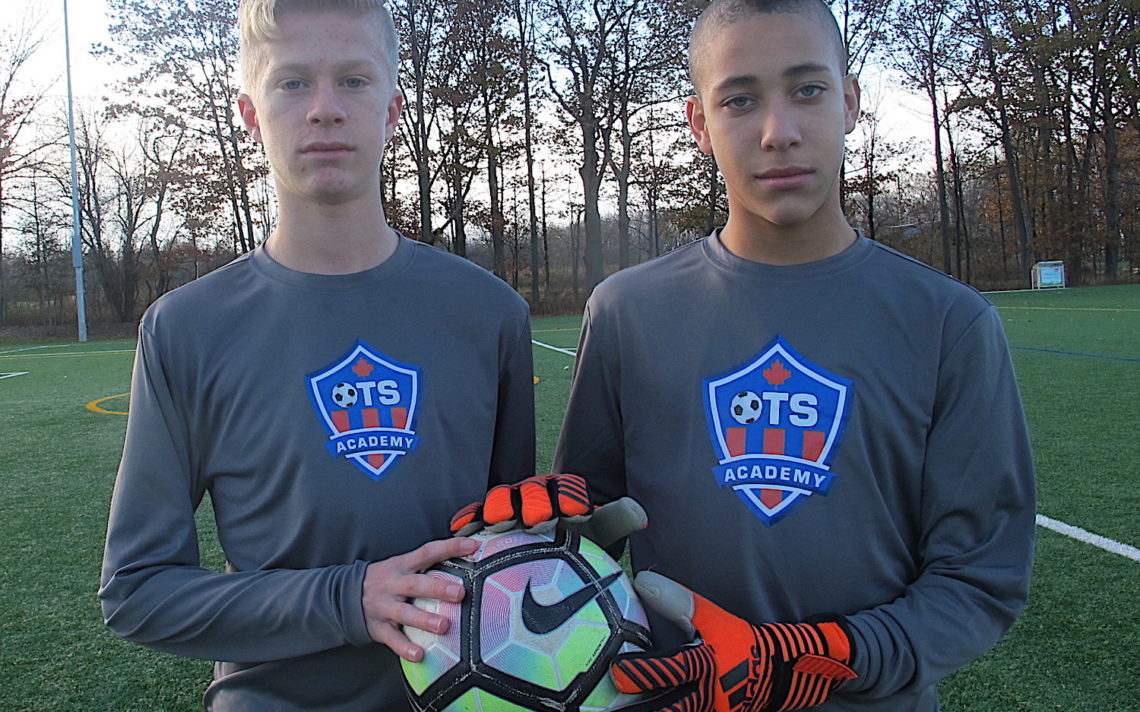 This is Day 9 of BPSN’s 12 Days of Christmas, a look back at some of our favourite stories from 2017. We hope you enjoy revisiting some of our top stories since our inception in September.

Christian Giancola, left,  and Gabriel Givans, right, will be participating in the Rome Cup in Italy later this year. PHOTO BY: BILL POTRECZ

Christian Giancola and Gabriel Givans are about to experience the soccer trip of a lifetime.

The two local players have been selected to the CAF (Canadian Academy of Futbol) select soccer team that will be participating in the Rome Cup against world powerhouse clubs Juventus, Roma, Napoli, Torino, Lazio, Paris St. Germain, Deportivo and Celta Vigo in the under-14 age group.

This team was selected from players from across Ontario and is coached by former Toronto FC star Dwayne DeRosario.

Both players are naturally chomping at the bit to play in the tournament which runs Dec. 31 to Jan. 9  in Italy.

Giancola, a 13-year-old, Grade 8 student at Monsignor Clancy in Thorold, wasn’t sure what to expect when he tried out for the club. He learned of the opportunity through his training with the OTS Soccer Academy in Hamilton.

“I went in there just to see what I could do and do my best and hopefully make it,” said Giancola, whose uncle Dan is a former Canadian Football League kicker.

Giancola will never forget getting the e-mail stating he had made the team.

“I got the email at one in the morning. My dad came to get me and I was speechless. I was up all night stressing about it,” he recalled.

Giancola is a centre-back who began playing the sport when he was eight. He played in his hometown of Thorold until last season when he began training in Hamilton.

“I went to Hamilton to see what it was like and see what the atmosphere was and to see what the difference was between Niagara and Hamilton soccer,” Giancola said. “It was tougher and the people were nice.”

Giancola said he was told by the team to play safe soccer and be a good teammate and leader.

To prepare for the tournament, Giancola is working out three days a week in Hamilton and twice weekly in Toronto.

“We’re working on fitness. We work hard and getting adjusted to cold weather because it’s an outdoor tournament so we do outdoor training,” Giancola said. “We have a really strong team. I’ve played with many teams and I think we have a strong team and can match up with anyone and we’re well coached.”

Givans, a 12-year-old goaltender who attends Garrison Road Public School in Fort Erie, is a former gymnast who didn’t even know about the tryouts until he found out about them through his training in Hamilton.

“We didn’t know about it until we got up to the academy and were told there was this CAF team we could try out for,” Givans said.

Givans, too, was unsure what to expect at the tryouts.

“I’m still new to the team and league so I didn’t know what the competition would be like. We went there to see what my place was compared to the other kids,” he said.

Once he began the tryouts, Givans quickly thought he had a chance to make the team.

“There were only three goalies so I had it in the bag after what I saw in the first tryout,” he said.

Givans began playing when he was three years of age. By seven he was playing at the travel level with the Concord Soccer Club.

Givans loves being between the pipes.

“It’s different. You get looked at more and it’s easier to get picked up and easier to make it to the big leagues. You can spot your competition easier,” he said.

“My mother was a goalie growing up and told me how great it was. I kind of got that mindset to be a goalie and follow her lead.”

He also quickly learned how important it is for a goaltender to be able to move on after permitting a weak goal.

“It’s very important. If you go in with the mindset — especially if it’s early in the game — that I’m doing horribly then you’re going to continue to do horribly and not be able to shrug it off and get better. You’re just going to play badly for the rest of the game.”

To help Givans with funding for the trip, a gofundme account has been set up at https://www.gofundme.com/help-gabriel-follow-his-dreams