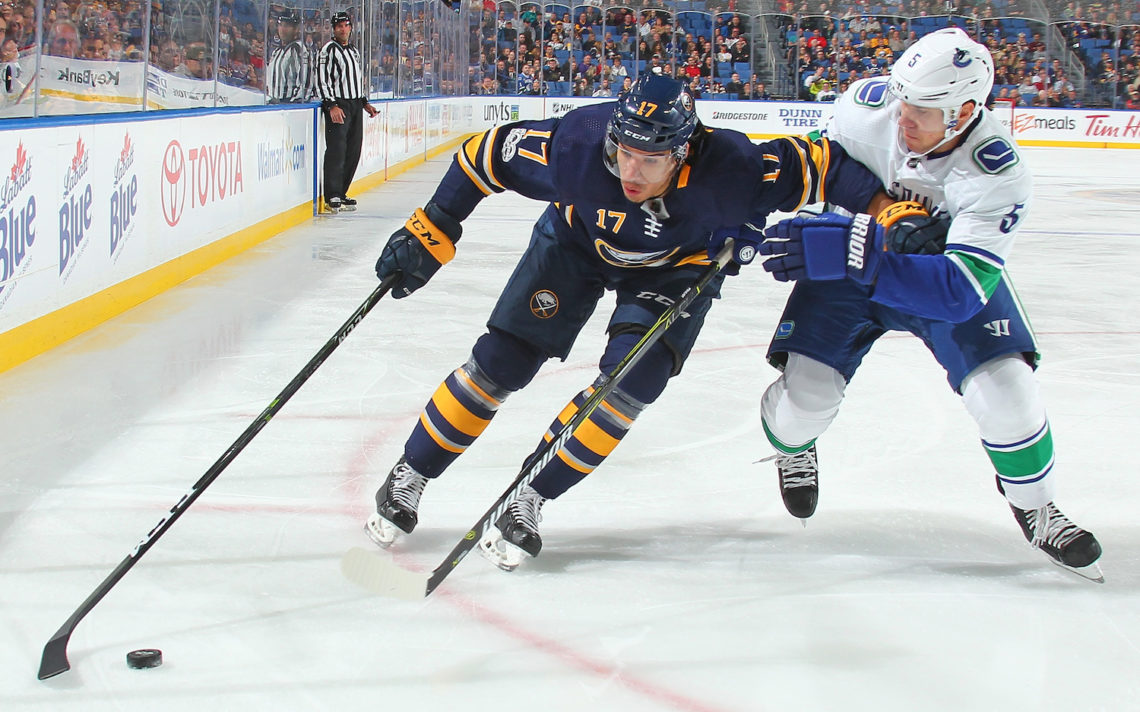 This is Day 10 of BPSN’s 12 Days of Christmas, a look back at some of our favourite stories from 2017. We hope you enjoy revisiting some of our top stories since our inception in September.

Jordan Nolan couldn’t have asked for a better scenario than to be picked up by the Buffalo Sabres after being placed on waivers last month by the Los Angeles Kings.

Not only is Nolan familiar with Buffalo from his father Ted Nolan’s two stints with the Sabres as head coach, but the move also brought him much closer to his off season home of St. Catharines.

“I was pretty excited,” Nolan said. “My parents always come to St. Catharines. My brother (Brandon) is in Whitby and my wife’s family are from Windsor so this is a lot better for family members to come visit us.

“It’s a pretty easy switch for me being so close to St. Catharines and with my dad coaching here, I’m used to the city. If I would have gone somewhere totally new where if I didn’t know anything or anyone then it would have been a little bit different but the transition hasn’t been too bad at all.”

“It’s just a great, nice, small town,” Jordan said. “I went to school there starting in Grade 7 and a lot of my friends are still there.

“St. Catharines is my second home you could say.”

Nolan had been in the Los Angeles system since being selected in the seventh round of the 2009 NHL draft. He made his NHL debut with the Kings in 2011 and played there until last month.

Nevertheless, Nolan still returned to St. Catharines every off season, leaving the sun, sand and beach of the left coast behind.

“It’s nice to unwind a little bit,” he said. “LA is such a big city and it’s pretty expensive to live there all year so (it was nice) to come back to St. Catharines where all my friends are.”

Nolan began his junior career with Erie in 2005/06 but after 33 games found himself back home playing junior B for the St. Catharines Falcons.

“I think I was just a little too young,” he recalled. “I was in Grade 11 when I first left home and come back playing junior B in St. Catharines helped me out in a lot of ways and helped me grow and develop. My brother played for the Falcons so it was kind of nice to put that jersey on.”

Nolan was back in the OHL the next season with the Windsor Spitfires and also spent time playing for the Sault Ste. Marie Greyhounds. Along the way he developed a reputation as a tough winger who could mix it up when needed and also chip in offensively from time to time.

That grit is what attracted Nolan to the Sabres, a team filled with young promising players who lack experience and playing in a winning culture.

The Sabres have used Nolan on the fourth line, the same role he thrived in with the Kings where he won a pair of Stanley Cups in 2012 and 2014.

“They didn’t expect anything else out of me other than what I have been doing for the last few years,” Nolan said. “I think I can still be a little better than I have been lately.”

Nolan enjoyed his time in LA, but could see the handwriting on the wall that a change could be coming.

“It was a little disappointing. I think I saw it coming the last few weeks after I started camp there,” he said. “This is another new chapter in my life coming to Buffalo. LA is a great team and and they doing great this year so hopefully we can start to pick it up here and catch them.”

Nolan, who played with current Buffalo assistant coaches Davis Payne and Chris Hajt with the Kings, is in the final year of a three-year, $2.85 million dollar deal he signed with Los Angeles.

The two Stanley Cups he won with the Kings still resonate with Nolan today.

“It means a lot. I worked hard for that my whole life,” he said. “It wasn’t an easy journey to get to the NHL and it’s not easy to stay in the NHL. The fact I won two Stanley Cups is pretty special to me and my family and it means a lot to play for a top team in this league.

“It’s not easy to develop that winning attitude and that’s what we’re trying to do here. It takes a lot of hard work and it’s not easy to get there. I take pride in the fact I was able to play on one of the top teams in the NHL for a number of years. It’s pretty special.”