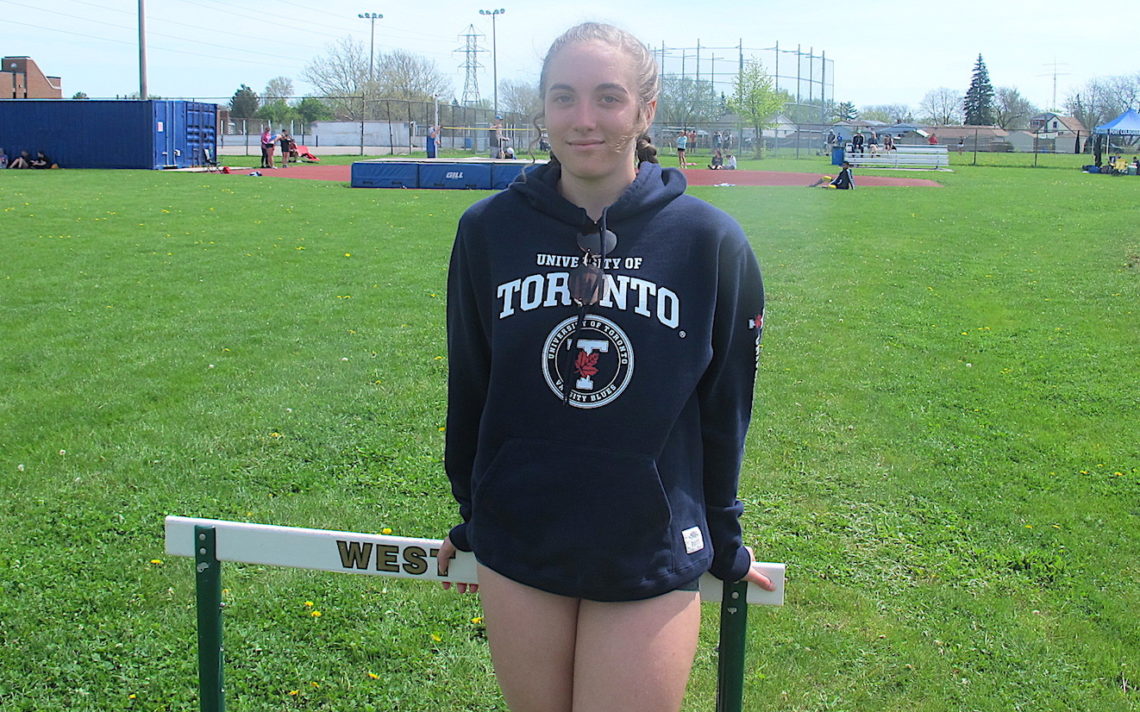 Reaching for the top

The 17-year-old, Grade 11 student at Notre Dame set a record in 2017 at OFSAA in the junior girls long jump and has set her sights high once again this year.

“My goal is to break the OFSAA (Ontario Federation of School Athletic Associations) record in long jump,” she said confidently. “I did it last year but this year is a lot harder with the two-year separation (in senior).

Saldutto, who set the new standard with a leap of 5.84 metres, is also an accomplished hurdler and short-distance runner with the 100 metres being her speciality.

She already has a gold in long jump and bronze in hurdles at OFSAA in Grade 9 and last year set the record as well as picking up a silver in the hurdles on a wild afternoon she won’t soon forget.

“Last year, my hurdles and long jump were almost exactly at the same time so on my last jump I set the OFSAA record, then ran to the start line and put on my shoes for hurdles right after with almost no break,” she said. “So to go and get second — I almost had first but I hit the last hurdle — it was really exciting. I had put it all that work and it worked out the way I wanted it too.”

Saldutto is big believer in setting the bar high.

She is contemplating focusing on just the field events at OFSAA.

“I don’t think I will be going to OFSAA in the 100. I think I’m just going to scratch it because then it’s too much,” she said. “For hurdles, I have a lot of competition. That’s kind of throw it all up in the air and see what happens.”

Saldutto trains at the University of Toronto.

“I’m not going to lie. It’s difficult to balance it at times with all the schoolwork and still trying to keep up with all the training. And then injuries always happen so there’s all the physio with that.

“It’s hard but you don’t have a choice if you want a future in what you are doing.”

Saldutto began taking track and field seriously in Grade 6 when someone suggested she might have a future in the sport.

“Someone saw me running— I don’t even remember where it was — and they told my mother she should get me to join a track club,” Saldutto said. “I Joined Niagara Regional Athletics and then I started training with a private coach.”

She has high aspirations away from the track as well, hoping to study forensic psychology. She isn’t sure if she will stay in Canada or head to the States for school.

“Most people I know, my friends, I always helped them out with their problems and I’m always right about things,” she said when asked for the allure of forensic psychology. “I’m really good and reading people and I really love law so it’s the best of both worlds.”