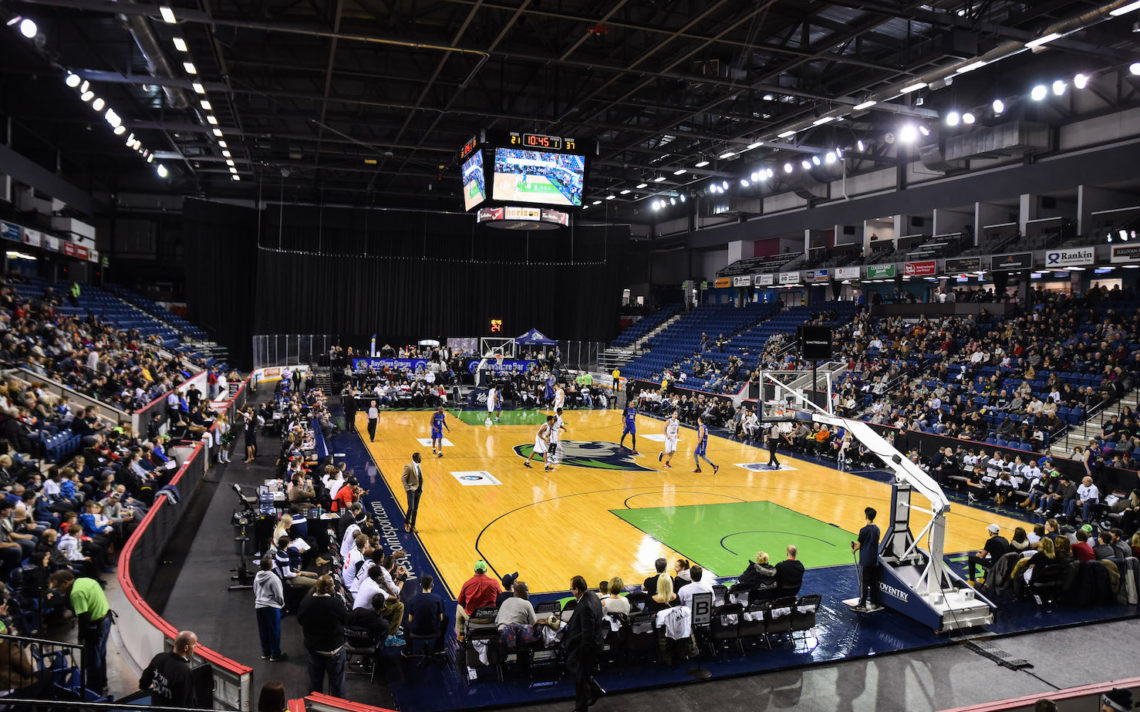 The Niagara River Lions will open their season Nov. 18 at the Meridian Centre versus the London Lightning. Photo by: MUIR IMAGE PHOTOGRAPHY

Joe Raso hit the ground running June 28 when he was named the new head coach and general manager of the Niagara River Lions.

The former McMaster Marauders head coach already had an intimate knowledge of the roster when he assumed his new role. Since March, the former advance scout for three NBA teams had been an independent consultant with the National Basketball League of Canada franchise in St. Catharines.

“I went there as a consultant with no intention of coaching,” said the former head scout and assistant coach with Canada’s men’s team.

All that changed as he became familiar with the team’s ownership and fan base.

“I became more fond of the idea. Even though the team hadn’t made the playoffs, I love the way the owners are doing it, I love the arena and the support the people gave to a team that had a very minor chance to make the playoffs.” His first order of business was to look at last year’s roster and decide what direction to take the R-Lions.

“I’m going to treat the whole product with the intent of minimizing transactions and trying to build a team that is going to get better as the season goes along.”

He believes inexperienced coaches fall in love with talent.

Last year’s River Lions had good stats and experience in the league but they weren’t an united team.

“I felt they were in the forming stage a lot last year,” he said.

Raso knows it will be crucial for players to buy into his way of doing things.

“People overuse the term culture but I think the defining part of culture is finding guys who want to win,” he said. “If someone wants to win, they will do everything it takes to win.”

Understanding that, Raso had to decide which guys on last year’s  team were in that boat and go forward.

“And sometimes you have to take a step backwards in talent to move forward as a team,” he said.

His 2017-18 team will be a mixture of young players and veterans who want to play his way.

“You are trying not to be married to a specific style of play but you have one in mind,” he said. “My plan on the offensive end will always be to use the pass as a weapon. We are going to create situations because we pass the ball so well.”

That style will utilize everyone on his 12-man roster.

“If you pass the ball with 12 guys, you are really going to play a 48-minute game,” he said.  “Defensively, we will be a good team-oriented squad and that goes back to me being a teacher. We will teach defence. It will not be a second thought on this team and we will score off of defence.”

The River Lions’ training camp will be about teaching and players will be measured on their ability to play and aptitude for learning.

Raso’s plan is to bring 15 players into camp and chop down to a roster of 12. League rules have changed this year requiring teams to increase the number of Canadians on the active roster to five from four.

The team has signed two Canadians this fall: Dwayne Smith, a 6-foot-6 forward who was on Canada’s winning team at the Jones Cup; and, former Carleton guard Joe Rocca, a 6-foot-4 shooting guard who had a short stint with Niagara at the end of last season.

In recent weeks, the team has signed American guards Adam Klie and Nate Frye, who averaged 10.6 points a game with the University of New Orleans this past season.

Klie was named the NCAA Division 2 California Collegiate Athletic Association player of the year while suiting up with the University of California at San Diego. Raso found Klie on a 10-day scouting trip this summer to pro camps in Las Vegas. His friend Scott Morrison, an assistant coach with the Boston Celtics, worked out Klie with Celtic Gordon Hayward and was extremely impressed.

“He told me that this guy can play and that’s kind of what I saw.”

Raso was worried he might lose Klie to a medical school or graduate school application.

“This guy is a total student, a great citizen and exactly what I want.”

The River Lions are hosting an open tryout at Niagara University on Sunday, Oct. 8 and the league will also stage a free agent camp later this month.

The team hopes to open its camp on Monday, Oct. 30 in advance of the season opener Nov. 18 at home versus the London Lightning

“In the past, they have gone a lot longer with their training camps but I think they used their camp as a tryout,” Raso said. “They brought X amount of guys in but I am trying to do that filter ahead of time.”

The team hopes to partner with Ridley College and have the team’s training camp at the private St. Catharines school. The team has held past camps at the Boys and Girls Club in Niagara Falls and had a great relationship with that organization, But the gym is not regulation size and it hurt Niagara’s transition game, Raso said.