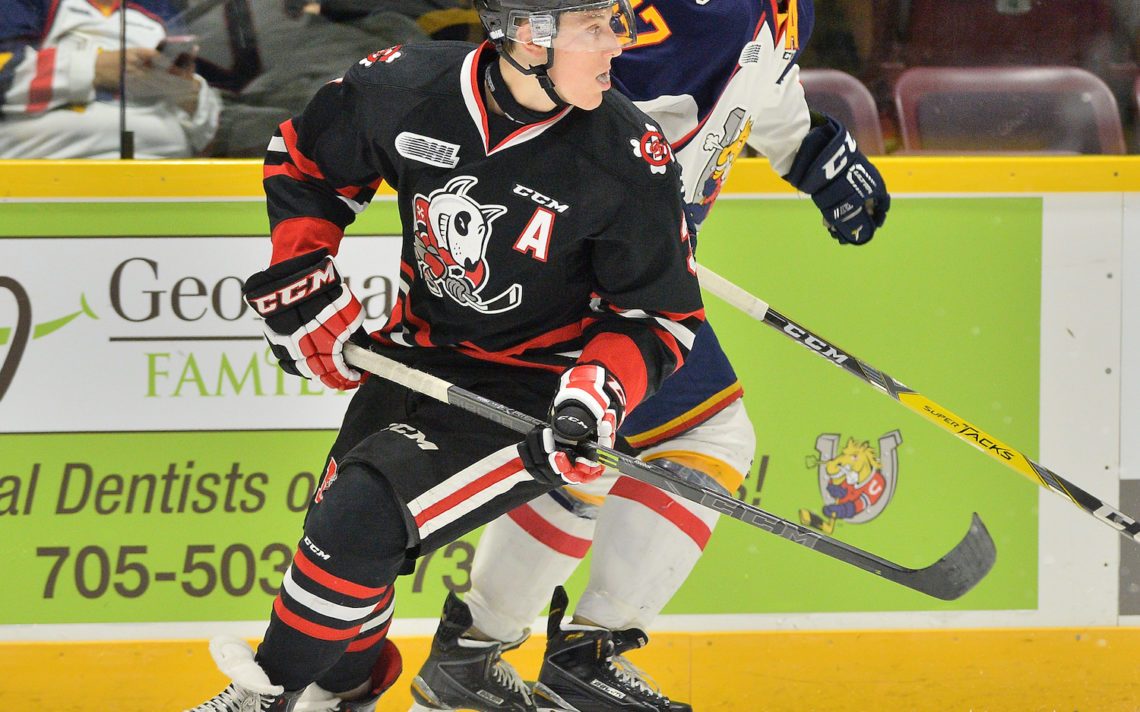 Jones looking to round out his game

By Bill Potrecz
Centre Ben Jones is concentrating on playing a two-way game for the IceDogs. PHOTO BY: TERRY WILSON/OHL IMAGES
Ben Jones seems to have found his niche with the Niagara IceDogs.
The former first round draft pick has always been a solid enough offensive player, but after attending camp with the Las Vegas Golden Knights last month, his long-term vision for what it might take for him to succeed at the pro level became more apparent.
“That’s where my future is moving into professional hockey, a two-way, 200-foot guy,” Jones said. “Points aren’t really going to be my strong suit in professional hockey but I definitely want to come in and put up some good numbers here. It’s major junior so I want to be one of the top guys in the league.”
Jones, who collected 13 goals and 50 points last season and should easily crack the 20-goal barrier this year, said it’s imperative a player play to his strengths.
“It’s essential to figure out your identity and own personal game and how you are going to succeed and focus on those strong suits while still being able to open my eyes up to other parts of my game,” the 18-year-old Waterloo native said.
IceDogs coach Billy Burke agrees Jones is at his best when working at both ends of the ice.
“He’s most valuable in the sense that he’s a really solid, reliable two-way forward who has the skill to play on the power play but also has the smarts and awareness to be a defensive forward. The ability to play him in multiple situations is his biggest asset.”
Burke appreciates Jones’ maturity to recognize his strengths and not try and force a square peg into a round hole.
“Self evaluation is a big thing. Pros get it but that’s why they are pros. A lot of times in this league guys don’t have a very strong idea of the type of player they are or what their strengths are,” Burke said. “The fact is Jones knows what he is. He doesn’t try to be something he is not. He’s starting to get respect around the league as a guy that’s hard to play against and does the right things, doesn’t cheat on offence, and takes pride in his defensive play.”
Jones was selected in the seventh and final round of the 2017 draft. He attended camp and came away with a new appreciation for what it means to play at the professional level.
“At the beginning it was a bit overwhelming,” he said. “It was eye-opening to realize how some of the older guys and NHL guys are pros everyday, the whole day. The NHL guys helped us settle in and were really nice and open to questions. It was awesome to be able to have that connection.
“When rookie camp was over and we got into the main camp with some of the NHL guys, the speed and competitiveness was pretty eye-opening and shocking to see how much work they put into practice and the games are pretty much the fun time.”
Jones said he received positive feedback from the Golden Knights.
“They said they were impressed with me and I turned some heads and left a good impression with them. They said come here and have a great season and get back to development camp next year and keep turning heads and rising up the ladder.”
Jones said it didn’t bother him where he was drafted, so long as he heard his name called.
“It was a long wait until the seventh round but I’m not really focused on where it happened, but that it did happen. To have someone recognize me and all the hard work I put it is awesome and have Vegas as a backbone and they are always watching. I can focus on having a great year here and know they are watching my progress.”
The IceDogs, 3-1, are home to Sudbury Thursday before travelling to Oshawa Friday and Hamilton Saturday. 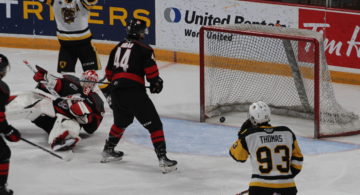