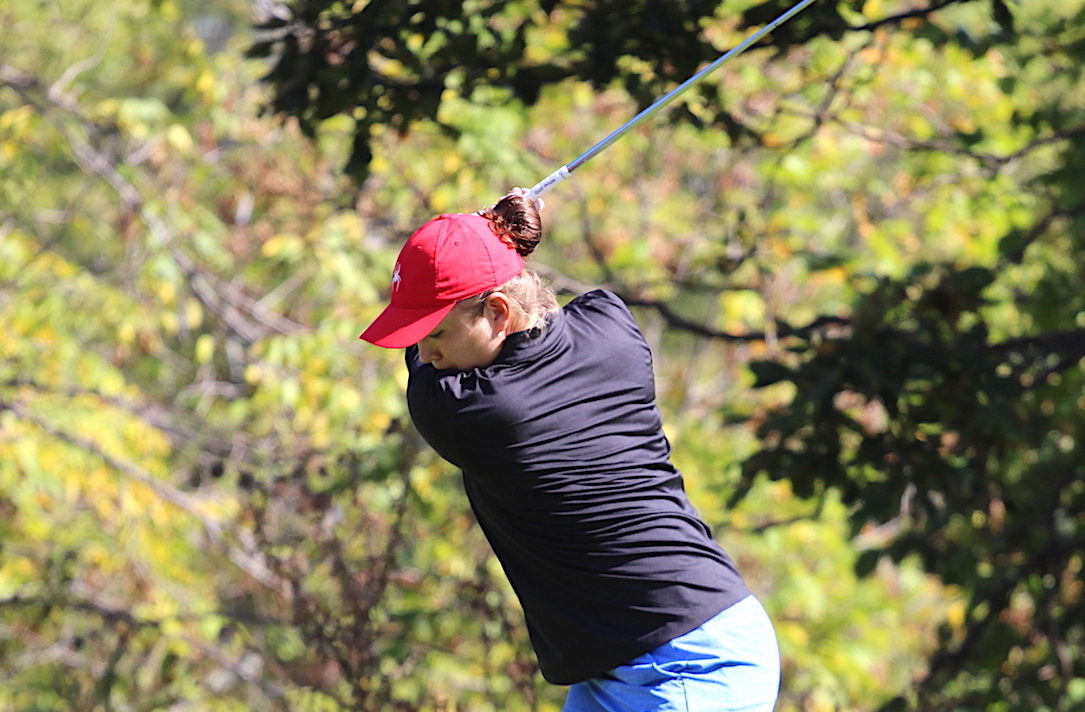 Emily Ward’s performance at the Ontario junior girls golf championship in July was a microcosm of her entire season.

The 17-year-old Niagara Falls resident opened with a 72 but followed that up with a second-round 85 that she couldn’t recover from. She ended up tied for fifth. “I was leading after the first day and took myself right out of the tournament on the second day,” said the Grade 12 student at A.N. Myer.

The Grand Niagara member, who won the Southern Ontario Secondary Schools Association individual girls title  Monday at Twenty Valley with a 32-38-70, struggled with her game all season.

“Everything kind of fell apart at the same time and it was really tough to recover from it,” she said. “I learned a lot about my golf game and myself and it wasn’t the worst thing that can happen. I think I will be a better player for it.”

She struggled mightily with her driver for most of the season.

“That was really tough because the courses played long, but my short game improved tremendously which helped improve my scores towards the end of the season. I will be grateful for that next season.”

The 11th-place finisher at last year’s Canadian juniors feels her struggles have made her a better golfer both physically and mentally.

She does admit to a few tough moments during the summer.

“At one point, I was close to being done but I told myself I couldn’t give up.”

On Monday, she was four over after five holes but rebounded to shoot a 32-38–70.

“I had an eagle on a par five and then I came back with a birdie which is one of the toughest things to do after an eagle,” she said. “I told myself to trust every shot and be committed on every shot. It definitely helped.”

She was second at SOSSA last year and won when she was in Grade 10. Last year, she won a bronze medal at Ontario Federation of School Athletic Associations championship and she would love another podium finish Oct. 11-12 at the North Bay Golf and Country Club.

“It will be tough conditions playing up north in the middle of October but I am excited for the challenge,” she said.

It looks like her game has turned around just in time for OFSAA.

“Right now, everything is coming together and that’s bittersweet because it’s the end of the season, But there’s nothing better than finishing your season on a good note.”

She will have next spring and summer to prepare for taking the next step in her golf career. Ward has committed to play NCAA Division 1 scholarship golf at the University of Richmond in Virginia.

“I absolutely fell in love with the campus, the coach, the girls are nice and they have a small school which will help me focus on my academics as well. And their practice facility is amazing.” The team’s head coach, Ally Wright, is a Canadian.

“She was not mad at all that I had a bad season and she had a very positive outlook on it. She knows it will be good for my following seasons and if I struggle again, I will know how to deal with it.”

Ward plans to spend lots of time at Grand Niagara preparing for OFSAA.

“They have been amazing to me and I am so blessed to be a member there,” she said.

Other Niagara golfers qualifying for OFSAA in the open division (golfers who compete on a regional tour or at the provincial or national level) were Centennial’s Kayla Burke (37-41-78) and St. Paul’s Susan Leone (41-42-82).