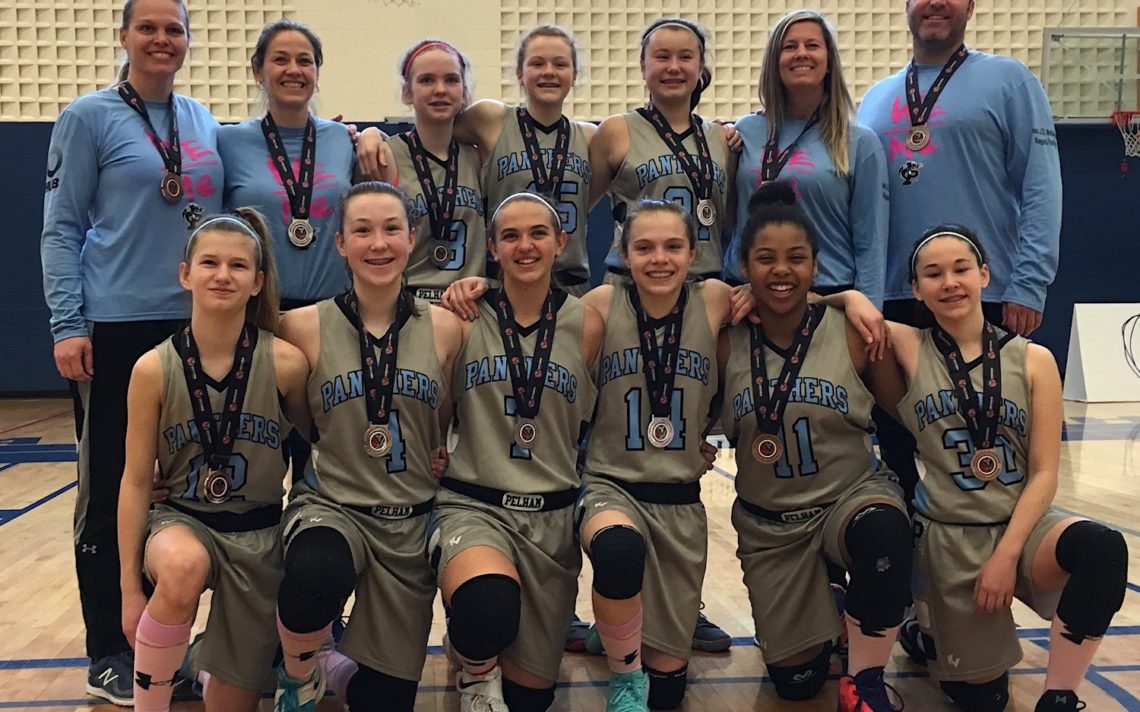 The Pelham Panthers under-13 girls basketball team that recently won a silver medal in Division 1 of the Basketball Ontario championships was anything but an experienced group.

“I want to pay tribute to the girls because four of our nine girls who played on our team this year were new to basketball last year and one girl was new to basketball this year,” head coach Mike Hurley said. “They worked really hard.”

Last year, the team a won silver medal in Division 2, representative of being the 10th best team in the province.

“We didn’t have a team for my daughter (Sarah Hurley) so we looked at soccer fields, we looked at track and field meets and we got two girls from A.K. Wigg where Sarah goes to school,” Mike Hurley said. “We were looking for athleticism and for girls who didn’t play somewhere else.”

Last season, the team went from a Division 4 or 5 team (25th to 40th best in Ontario) to Division 2 (ninth to 16th) where it finished the year with a silver medal.

“This year, we started playing all Division 1 teams (top eight in Ontario) at the start of the year and it was tough, but we were in the mix and competing,” Hurley said. “By the end of the year, we had won the Brantford tournament with all Division 1 teams and the Blessed Sacrament tournament which had the No. 1 team in the province and Transway, which beat us in the final.”

The squad also performed well in the OBLX league.

“The girls have skyrocketed in the two years that I have been blessed to work with them,” Hurley said.

Pelham went into the provincials finals as the hottest team in the province and went 3-0 in pool play, defeating top-seeded East York team 36-32, fourth-seeded York North 42-33 and eighth-seeded Guelph 34-31.

“This was absolutely anybody’s tournament,” Hurley said. “There were nine or 10 teams in the province that could have won this tournament and only eight got in.”

In the final, the Panthers fell 48-32 to third-seeded Transway.

“It was a fantastic game for three quarters and we were winning going into the fourth,” he said. “Then everything went wrong.

It was a run unlike anything Hurley had ever seen before and he used all three of his second-half timeouts in the first three minutes of the fourth quarter trying to stop the bleeding.

“They got unconsciously hot and we went stale at the wrong time,” Hurley said. “I felt awful for the girls because they played three awesome pool games and we were doing a great job for three quarters.”

The team felt bad but could take solace in the fact it played great for three and three quarters of its four games.

“I want to keep the momentum moving forward,” Mike Hurley said. “The girls are really engaged, they’ve bought in, they’re excited and parents are already starting to call and are itching to get back on the floor.”

Hurley plans to give his team a few weeks off before he starts in with a little bit of spring training and fun events such as three-on-three tourneys or events in the States.