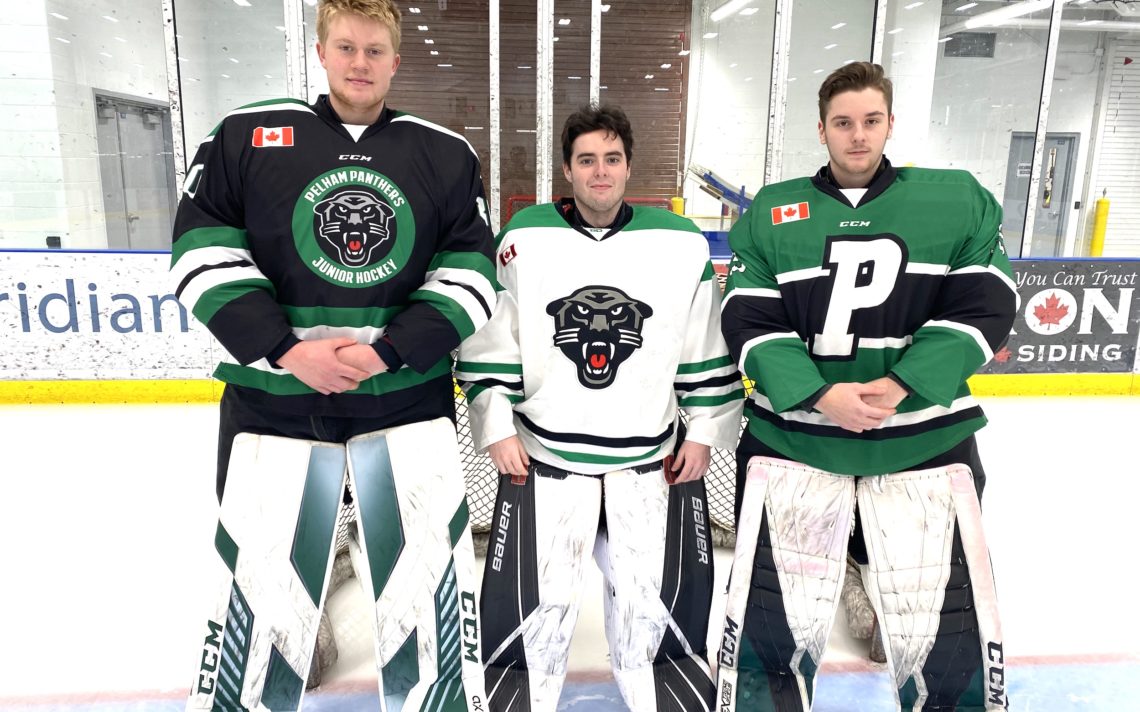 The Pelham Panthers feature a crowded crease this season.

The Panthers have been operating with three goaltenders — Brayden Kelso, Duncan Rolleman and Jeff Kernichan — in an effort to be prepared as possible during the COVID-19 pandemic.

“We recruited Brayden and Duncan and when we learned what was happening this year we figured we needed a third as well,” Panthers coach/general manager/owner Tim Toffolo said.

Toffolo said there have been more than enough pucks to go around to stop for the three netminders.

“It’s really worked out well,” he said. “They are three really great guys. Brayden was hurt for a while so the other two have been going back and forth carrying the load. They both seem to be finding their place.”

Toffolo made the situation clear from the start.

“They understand because we’re not allowed to AP (add an associate player)” he said. “We told them this is a different year. There is nothing we can do about it. It’s the nature of the beast. If you lose somebody, then you have to go find somebody.”

Kelso, a 19-year-old from Erin who has two years of junior B experience in Brockville of the Eastern Ontario Junior Hockey League, has no problem with the arrangement.

“I think it’s great for all three of us,” he said. “We all have a different kind of skill set so we’re really challenging and pushing ourselves, especially in practice watching one of the other goalies do their thing. It just makes you want to do that much better.”

Kelso said all three goaltenders are looking at the big picture rather than if they are between the pipes for a certain scrimmage or how they are utilized in practice.

“You have to focus on why we’re here. We’re here to win. We want to win a championship,” he said.

Rolleman joins the Panthers after posting a 1.97 goals-against average and league-leading .934 save percentage for the Wellesley Applejacks of the Provincial Junior C Hockey League last year.

“We talked about just coming in and doing what we can do individually every day,” Rolleman said. “As a group off the ice, we all get along really well which helps. We all want to play of course. We’re all working on the ice.”

Rolleman, an 18-year-old native of New Hamburg, enjoys the competition.

“Having two other guys definitely helps push me every day in practice so the games will be better. The others feel the same too.”

Kernichan is an 18-year-old Milton resident who played at the 18U level in Kitchener last season after spending the 2019/19 campaign with the Southern Tier Admirals.

“At the end of the day I came in here as the third guy,” he said. “I was the last one and I understood my role right away and knew these guys signed first so I had to make my way up.

“I think everybody is dealing with it really well. They have been really supportive for me. I see these guys as my brothers.”

Kernichan is enjoying his first season at the junior level, despite playing only non-contact scrimmages as the Greater Ontario Junior Hockey League works toward a Jan. 15 start date for the regular season.

“It’s a lot different start than what I’ve seen or what I’ve been told. Just to get out there with the guys — there’s no fans — but at the end of the day playing the game is what matters,” he said. “I have no complaints. I’m happy we’re playing and I think Tim is doing a great job of keeping us going.”

Once the regular season begins — government and local health boards still have to sign off — Toffolo will play it by ear with the netminders as far as playing time goes.

“We don’t even know yet,” he said. “Sometimes things just work themselves out. We’ll see what happens. Obviously whatever goalie is the hottest, we’re going to go with when we get going. It’s no different that anything else.”