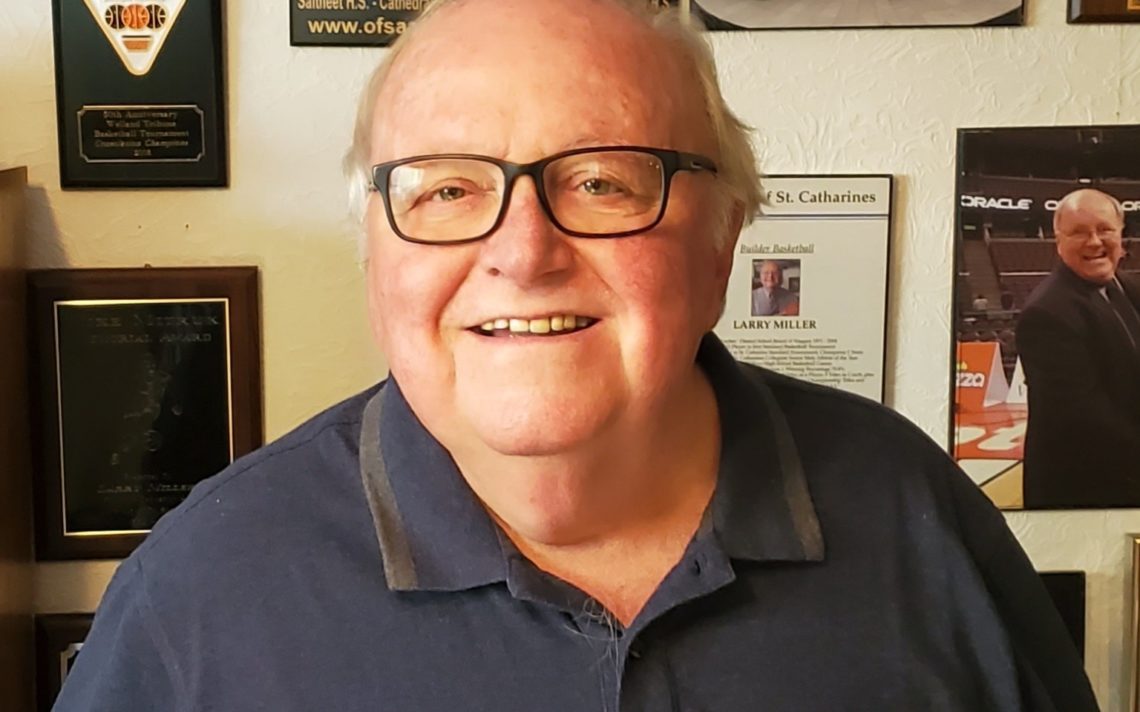 A life in basketball

For the past 58 years, the first week of December has been booked solid for Larry Miller.

The 75-year-old St. Catharines native played in the first Standard High School Basketball Tournament in 1962 and has been involved in the tournament as player, coach or member of the committee since.

“Around this time of year, we’d be sitting around having a beer and setting up the seeds for the tournament,” Miller said.

Miller fondly recalls the first tournament, played at Ridley College while the gym at the St. Catharines Collegiate was being completed.

“That was my first claim to fame. That was the start of my connection with The Standard Tournament,” he said. “Over the 58 years, it’s become a tradition in the city of St. Catharines.”

That tradition has been put on hold this year as the tournament won’t be played due to the COVID-19 pandemic.

“Because we have 16 teams and because there is a whole gamut of team strengths and weaknesses, even the bottom teams have a chance to play in a big tournament which they wouldn’t otherwise be able to do in the course of a season,” Miller said. “This is a very big deal for the Niagara Region.”

Miller, who is a member of the current tournament committee and also volunteers as a TV broadcaster on final night when the games are broadcast on local cable TV, won two Standard titles as a player and nine more as a coach, all with the St. Catharines Collegiate Saints.

“I was also quoted you’ve never completed your high school basketball career without a Standard Tournament victory, which wasn’t always the case,” Miller said. “It meant a lot to be being involved from the onset and continuing to be in some capacity with the tournament.”

Miller coached the majority of his career at the Collegiate before finishing up at Governor Simcoe.

He gives credit to the late Les Korchok for instilling in him the love of the game.

“As the point guard, I would pick his brain how to run offences and defences and that really instilled the kind of love for the game I had,” Miller said.

He also tipped his cap to the other coaches at Collegiate and Simcoe he worked closely with.

“If you want to experience success you surround yourself with successful people and I was very fortunate at Simcoe, and especially at the Collegiate, to have people like Dean Douglas, Ivan Foster and Walt Szpilewski setting the table for me. At Simcoe, I had Woody (Pat Woodburn) and John Dakin.”

Miller, who retired from teaching in 2003 but continued to coach for a handful of seasons afterward, loved every minute of his time in the gym.

“It wasn’t a job. There was enjoyment to it. The kids were great, the parents were great, so we miss that part of the basketball family and tradition,” he said. “I didn’t look at it as taking up time, it was an enjoyable time.”

Miller’s long, respected and successful involvement with high school basketball earned him a place in the St. Catharines Sports Hall of Fame. He was elected in 2013 along with Elizabeth Earley, William Fitzgerald, Keith Murphy and Ronald Roy.

“I was totally flattered and honoured to be chosen to be part of that select group of people,” Miller said. “Being St. Catharines born and bred, going back and looking at the previous winners, I had some kind of connection or recollection of each and every one of them.

“To be part of that select group was really humbling.”

Miller is also a member of the Hall of Fame committee. This year’s selections were also cancelled due to the pandemic.

“It is disappointing that unfortunately won’t be happening this year,” Miller said.

Miller loves being a member of the committee and helping select the new inductees each year.

“We have some great leadership with (committee chairman) Peter Partridge and meet when necessary and to narrow it down to five is sometimes difficult because it means a lot of people deserve the recognition, at least to be nominated,” Miller said. “We’re never hard pressed to fill the five positions on the Hall of Fame.”