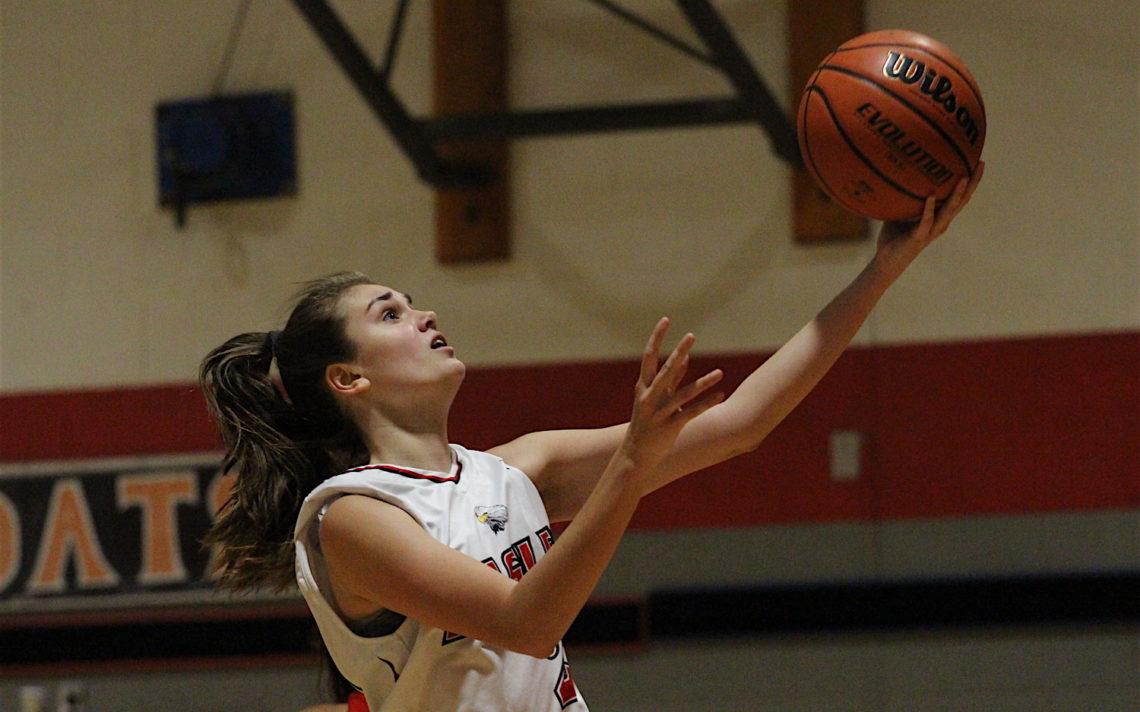 The Grimsby Eagles defeated the Denis Morris Reds 51-24 in the consolation final of the Standard Girls Basketball Tournament. Photos by TESS PUCHALSKI

It was another day at the office Friday night for Grimsby Eagles basketball player Paige Epp.

The Grade 12 sniper poured in 25 points to lead her team to a 51-24 victory over the Denis Morris Reds in the consolation final of the Standard Girls Basketball Tournament.

In the three games leading up to the final, the 5-foot-4 guard scored 22, 25 and 20 points on her way to a berth on the tournament all-star team.

“That’s her average all the time and she’s our go-to player,” Grimsby coach Erika Smith said. “Her threes weren’t dropping at first but I told her to keep putting them up. If they’re not going out, they’re going in.”

“Once I get my shot, it works so I kept shooting,” Epp said. “My coach told me to keep shooting because she knows when I get frustrated — which I was — then I get in my own head.”

She would love to be hot every day but that just doesn’t happen.

“Yesterday I was good at the beginning and then I went cold. It just depends on the day,” she said.

Epp used to play travel basketball for Hamilton Transway and Stoney Creek Newman Youth but stopped a few years ago to concentrate on soccer.

In addition to scoring Friday, Epp had a solid all-around game. She finished with a game-high 10 steals and five rebounds.

Smith was proud of her entire squad.

“It really felt like they (Denis Morris) wanted to run us into the ground because we had a very short bench tonight, but our girls were able to stick with it,” she said. “Their stickwithitness (the coach’s word not mine) is bar none.” The Reds led 14-10 at the end of an ugly first half for both teams and then fell apart in the second half, getting outscored 41-10

“It was not one of our best games. We had a lot of turnovers,” Reds head coach Stef DeMizio said. “We had some good decisions, but some real poor decisions and I think our youth showed a lot.”

One of few bright sports was the play of Grade 10 player Cayla Miracle. The 5-foot-7 guard finished the game with five points, three steals and very few turnovers.

“Cayla had a very good game,” DeMizio said. “She’s strong with the ball and I am very proud of her. She did well.”

Mirabella said the Reds were sunk by a number of problems.

“We had bad passes and bad turnovers,” she said. “I think we just fell apart in the finals.”

The 15-year-old, a member of the St. Catharines Rebels squad that placed seventh in Division 1 of the OBAs last year, is enjoying her first year of senior ball.

“I like the challenge,” she said. “It’s very competitive and I feel confident out there.”

Both her and the team are works in progress.

“We have to work together as a whole team,” Mirabella  said. “For me, I have to start looking at my options on the floor.”

After opening the tournament with a 53-35 loss to St. Francis, the Reds rebounded by defeating Greater Fort Erie 41-33 and Holy Cross 43-18.

BPSN Star of the Game: Grimsby’s Paige Epp with 25 points.