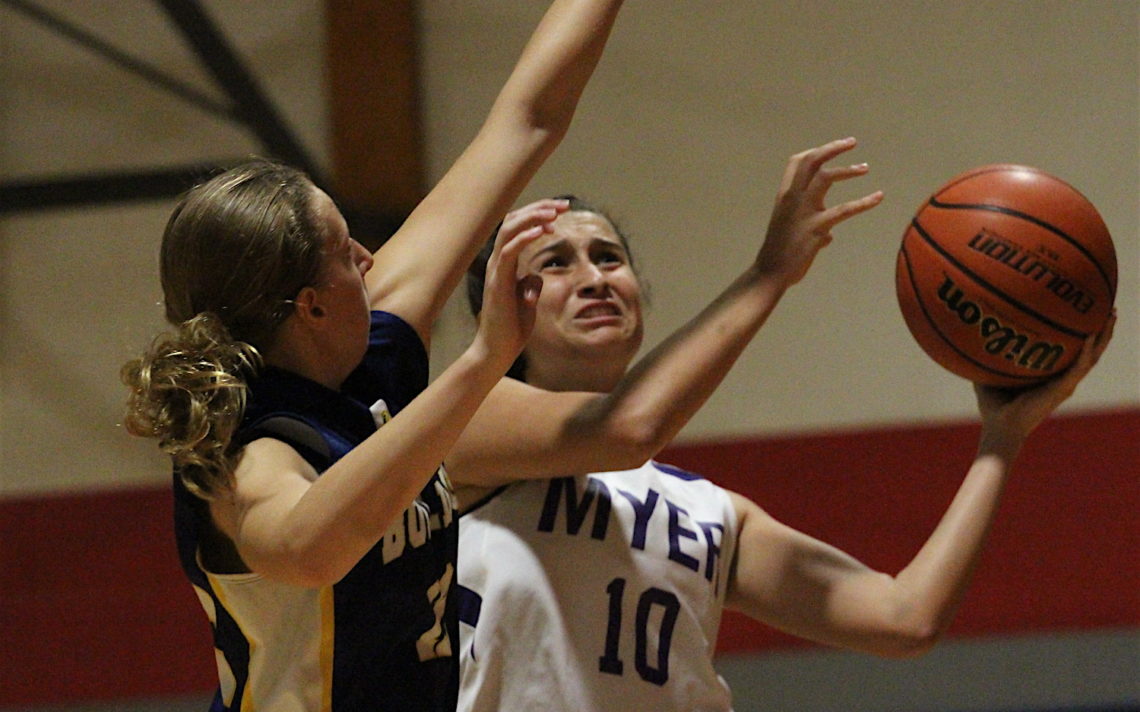 Led by Julia Colavecchia and Tori Rigas-DiDomenico, the Marauders eked out a 38-36 victory over the Sir Winston Churchill in a game that wasn’t decided until the final seconds.

“Someone had to lose and Tori and Julia played like stars and they finished really well,” Churchill coach Frank Keltos. “We were running around and couldn’t stop them.”

She averaged 15.5 points per game in the event and in the final had 15 points, eight rebounds and five steals.

“She works hard, she does everything you ask of her and she’s a great all-around player,” Myer head coach Kate Harpur said.

Harpur thought the win was about more than just her stars.

“Everyone got on the floor and everyone gave us good minutes,” she said.

Among the bigger contributors was Grade 10 forward Molly Taylor, who had four points, a team-high nine rebounds and three steals.

Colavecchia was thrilled with her team’s victory.

“It means a lot to us,” she said. “It’s going to boost our confidence going into our next tournament.”

Friday’s game featured few secrets between the two clubs. Myer’s Colavecchia, Emily Braun, Maddie Caughill and Taylor and Churchill’s Kaley DeMont and Ally Sentance were on last year’s Niagara JUEL Prep that finished second in the province and Colavecchia, Caughill, Taylor, Sentance and Churchill’s Olivia Krieger were on a Niagara Rangers under-14 team that won the Ontario Basketball Association Division 1 championship. In addition, Keltos and Harpur coach the Niagara JUEL team together.

“It helps us out a lot because we know how they play,” Colavecchia said. “I know Ally is very good defensively and Kaley is a shooter. We could shut that down.”

The 15-year-old spent the summer working hard on her game at No Limit Performance and played with the Welland Warriors in their summer league.

“My shots and my cardio have gotten way better,” she said.

Colavecchia has moved from JUEL Prep to the JUEL team this year and is driven to get better.

“I really want to try and get a scholarship somewhere in the States and maybe play D1 (Division 1),” she said.

Sentance made the most of her first appearance in the Standard tournament. The Grade 9 player made the all-star team, averaging 7.3 points a game in the tournament and had eight points, seven rebounds, three steals and five assists in the final.

“It feels really nice to be in this tournament now after watching it for so many years,” Sentance said.

It’s no surprise the 5-foot-7 guard has made an easy adjustment to senior ball considering she has been playing a year up since she was in Grade 2 and was a key member of Pelham Panthers and Niagara Rangers teams that played in Division 1 of the OBA.

“It’s a lot easier and I play with these girls outside of school too,” she said. “The competition is what I am used to and it’s not that much different for me.”

After playing so well in a semifinal victory over Blessed Trinity Thursday, Churchill didn’t have its best game versus Myer.

“We didn’t score, we were standing around watching the game too much and it’s that inexperience of not moving without the ball,” Keltos said. “We tried to shoot the three ball and it wasn’t there and that’s the game.”

Harpur is hoping this is just the start of something special for her youthful squad.

“Hopefully we can keep going up. We have to keep working hard and go to practice every day with intent.”